REET 2021: The Rajasthan government on Sunday said that mobile internet, bulk SMS and MMS and other social media services by ISPs will stay suspended in the Ajmer district from 6 am to 6 pm on Sunday.

Jaipur | Jagran News Desk: The Ashok Gehlot-led Congress government in Rajasthan on Saturday announced that mobile internet, bulk SMS and MMS and other social media services by Internet Service Providers (ISPs) have been suspended in the Ajmer district till Sunday evening in wake of the Rajasthan Eligibility Examination for Teachers (REET).

In a statement, the district administration of Ajmer said that the services will stay suspended from 6 am to 6 pm on Sunday. However, it said that the voice call of landline, mobile phone and landline broadband services will continue during the same period. 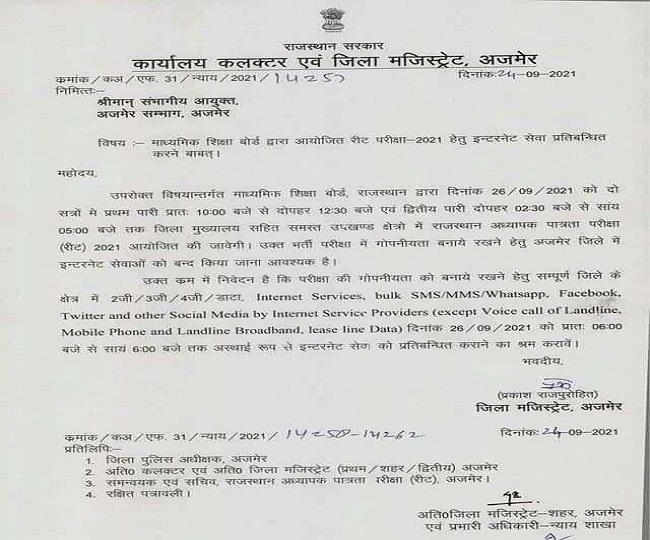 The decision to suspend the mobile internet and SMS services have been taken to avoid the question paper leak of the REET 2021 exam. The order came despite the Rajasthan High Court asking the state government to avoid suspending the services to conduct the exams.

The REET 2021 exam will be conducted on September 26 in the state. More than 16 lakh candidates are expected to appear in the exam that will take place in around 4,000 centres across the state.

Ahead of the exams, the Rajasthan Police on Friday arrested four people for an alleged bid to make dummy candidates write the test paper. The police said that the four people were srrested with Rs 5.60 lakh in cash in the state's Dausa.

Chats and an audio recording related to the examination have been recovered while their mobile phones are being checked, Dausa SP Anil Kumar Beniwal said. He said that during interrogation, the accused revealed about crores of rupees taken from several candidates for different competitive examinations.

Role of some coaching institutes and libraries has come to the fore, he added. The arrested have been identified as Sumer Meena (35), Dashrath Singh Meena (30), Ramesh Meena (25) and Karan Singh Meena (24).

(With inputs from PTI)