New Delhi | Jagran News Desk: India on Saturday witnessed another record spike of 11,458 new infections in last 24 hours taking the total toll of coronavirus cases to 3,08,993 in the country. The death toll also climbed to 8,884 with 386 new fatalities in the same period of time, according to the Union Health Ministry data.

Of the total 3,08,993 cases, 1,45,779 are active, while 1,54,329 people have recovered from the deadly contagion and have been discharged from the hospitals. With this the recovery rate in the country further improved to 49.94 per cent from 49.4 per cent yesterday. 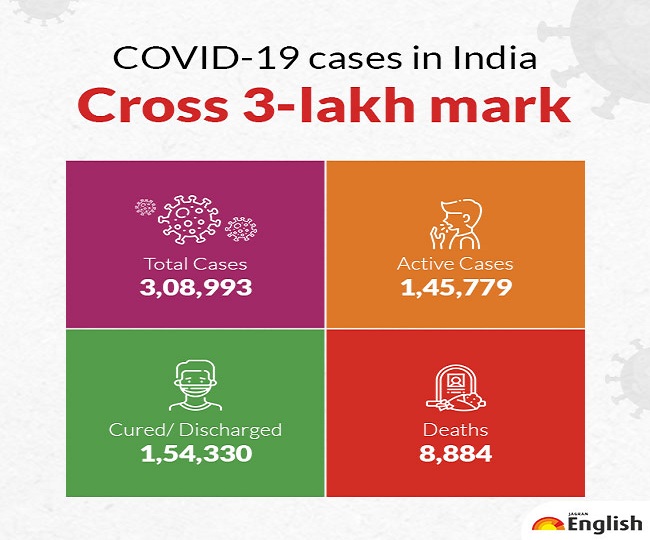 With the cases crossing the grim milestone of 3 lakh, India is now preceded only by the US, Brazil and Russia and ranked fourth on the list of worst-hit nations across the world. Russia currently has 5,11,423 cases and Brazil has 8,29,902 cases, while the US with 21,16,922 cases is the worst-hit nation in the world.

The coronavirus cases in the country have been increasing exponentially since May end, when the country entered the list top 10 worst-affected nations. In just 18 days, India became the fourth worst-hit nation leaving behind Italy, Spain and UK. India took only 10 days to reach the 3 lakh-mark after crossing the 2 lakh-mark on June 3.

Here’s the timeline of cases in India: 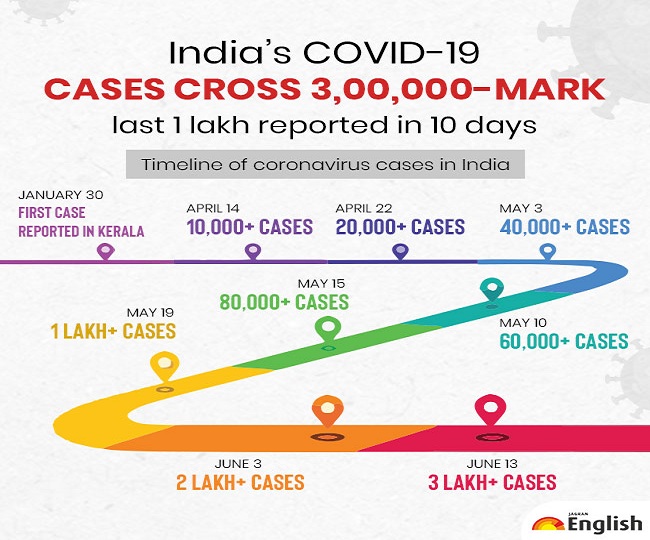 Among the Indian states, Maharashtra remains to be the worst-hit state accounting for over 1 lakh cases of the total in the country. The total in Maharashtra reached 1,011,41 after 3,493 new patients came to light in last 24 hours. The death toll in the state also rose to 3,717 with 127 new fatalities.

The southern state of Tamil Nadu with 40,698 cases is the second worst-hit state in the country. Tamil Nadu recorded a record high of 1,982 cases in a single day yesterday. The death toll at 367 in the state is averaging slightly lower than the death toll in other states in the top five list.

Whereas, the national capital Delhi, has been witnessing record spikes in cases from past few days. Delhi recorded highest single-day spike of 2,137 COVID-19 cases on Friday, taking the total COVID-19 toll to 36,824 cases. The death toll also increased to 1,214 after 71 new fatalities were reported in last 24 hours. 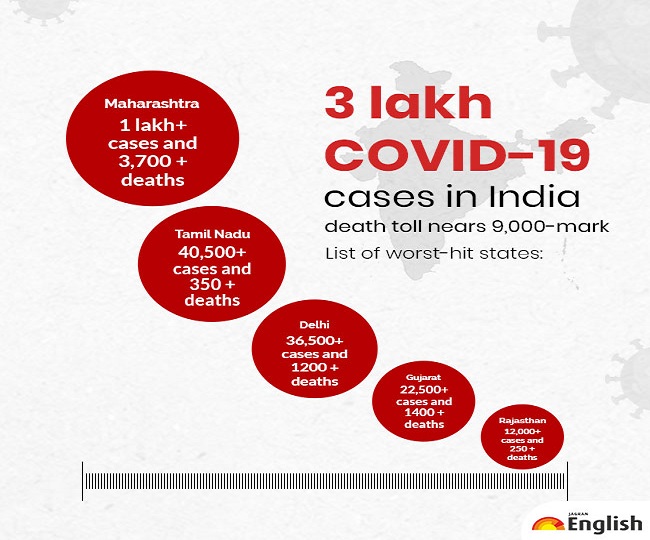 Here's the state wise list of coronavirus cases and deaths in the country:

Meanwhile, amid the sharp spike in cases with the country registering over 11,000 cases, the Union Health Ministry on Friday said that the doubling rate in India has improved to 17.4 days from 15.4 days a fortnight ago.

"The doubling rate/time continues to improve and has increased from 3.4 days at the beginning of lockdown to 17.4 days currently," the ministry said.