In an incident in Nubra valley, a Rajasthan's couple was charged a fine of ₹ 50,000 for allegedly driving their car over the restricted sand dunes

Leh | Jagran News Desk: A couple from Rajasthan's Jaipur on Thursday was booked by Leh Police for allegedly driving their car over the restricted sand dunes at the Hunder village in the Nubra Valley.

"One tourist vehicle was found violating the SDM [sub-divisional magistrate] Nubra's direction not to drive cars over sand dunes in Hunder. The couple from Jaipur were booked as per law and a bond of ₹ 50,000 was taken by them," the Leh Police said in the Facebook post while sharing the picture of a Toyota Fortuner SUV parked on the sand dune. 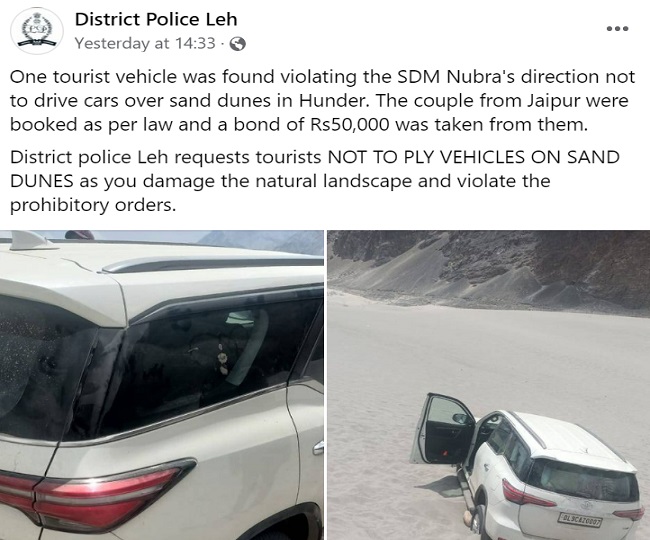 While people praised the Leh Police for charging the couple for their irresponsible behaviour, many slammed them for their 'lack of common sense'.

"Very proud of our District Police Leh, Rules must be stringent so tourists won't violate any traffic rules.", a Facebook user wrote. "People have lost civic sense," another commented.

A similar incident took place in April this year when an Audi SUV racing through Leh's Pangong Lake, with two tourists hanging out of the sunroof and yelling, came to notice. The video was widely criticised by the viewers.

Nubra, also called Dumra, is a historical region of Ladakh where the Shyok and Siachen rivers meet. This region is currently administered as a subdivision and a tehsil in the Leh district.