National Herald Case: Congress Leader Rahul Gandhi was grilled for nearly 9 hours by ED on Monday. He has been summoned again on June 15th for second round of questioning.

New Delhi | Jagran News Desk: Congress leader Rahul Gandhi on Monday was grilled by ED for nearly 9 hours in two sessions of his summons over the National Herald money laundering case. He has been asked to rejoin the National Herald investigation again tomorrow as per sources.

Rahul Gandhi appeared for the probe by ED for the first time for questioning at 11:10 om today and was present in the office till 9 pm. Earlier in the day, Rahul was accompanied by a battery of leaders including sister Priyanka Gandhi Vadra and escorted by armed CRPF personnel, and leaving for an 80-minute break in the afternoon.

On Monday, several Congress workers in Delhi and state capitals took to the streets and several senior leaders, including Rajasthan chief minister Ashok Gehlot, Chhattisgarh Chief Minister Bhupesh Baghel, Randeep Surjewala and K C Venugopal, were detained here amid a massive show of strength by the party which had called for the Satyagraha march against the ED summons.

10 Top Developments From The Big Story:

#WATCH | Congress leader Rahul Gandhi reaches the Enforcement Directorate office in Delhi for the second round of interrogation after a break, to appear in the National Herald case. pic.twitter.com/rbDddTibRU

- Apart from Rahul, his mother and interim Congress president Sonia Gandhi has also been summoned in the same case. She will appear before the financial probe agency on June 23.

- Delhi Police on Monday detained Congress workers including Adhir Ranjan Chaudhari, KC Venugopal, Deepender Hooda and Jairam Ramesh among other MPs who joined a huge protest by Congress workers who shouted slogans against the central government.

#WATCH | Congress leader KC Venugopal being taken away by Delhi Police after he was detained & taken to Tughlaq Road Police Station.

- On Sunday Delhi Police had cited a "law and order situation" denied permission to the Congress protest march and had imposed prohibitory orders near the Congress headquarters.

- "We will hold a peaceful protest march to the ED office under the leadership of Rahul Gandhi. We are the protectors of the Constitution, we will not bow down or be scared. By deploying a large police force, it has been proven that the Modi government is shaken by Congress," Randeep Singh Surjewala said.

#WATCH Congress leader Rahul Gandhi surrounded by hundreds of party workers marches to the Enforcement Directorate office to appear before the agency in the National Herald case pic.twitter.com/EN1sjuOqfx

- The lane leading to the ED office was barricaded and prohibitory orders under CrPC section 144 were imposed in the area by the Delhi Police even as anti-riots police RAF and CRPF contingents took positions to stop unauthorised people from entering. 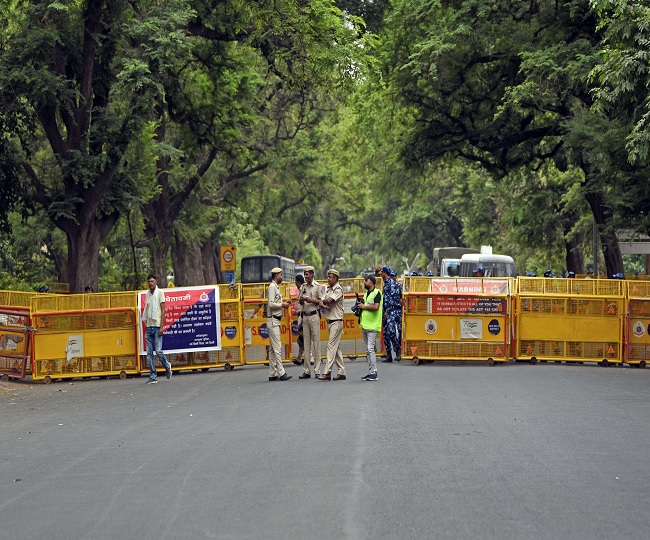 - The investigating officer of the case, an assistant director-rank officer of the ED, is understood to have put possible questions about the incorporation of the Young Indian company, the operations of the National Herald, the loan given by the Congress party to AJL and the funds transfer within the news media establishment.

- The Congress party said in a press conference in the morning that the 1937-established AJL faced huge debts and the party, during 2002-11, gave Rs 90 crore to the National Herald newspaper to pay the salaries of the journalists and staffers who worked there. The agency has questioned senior Congress leaders Mallikarjun Kharge and Pawan Bansal in April as part of the investigation.

- The Congress party had called the ED action "vendetta". It has termed the charges "fake and baseless" and added that the summonses to the Gandhis were part of the BJP's "vendetta politics". Sonia Gandhi and Rahul Gandhi are among the promoters and shareholders of Young Indian.