National Herald Case: Rahul Gandhi appeared before the ED on Monday morning and left its office at around 11 pm after over 10 hours of questioning.

New Delhi | Jagran News Desk: Rahul Gandhi on Tuesday was questioned for over eight hours by the Enforcement Directorate for the second consecutive day in the National Herald money-laundering case, reported PTI.

Gandhi, 51, who was quizzed for over 10 hours on Monday, arrived at the ED headquarters on APJ Abdul Kalam Road in central Delhi accompanied by his sister and Congress general secretary Priyanka Gandhi Vadra and his questioning began at 11:30 am.

After a session of about four hours, Gandhi took a break for about an hour at around 3:30 pm and went home. He rejoined the questioning around 4:30 pm and was still at the ED office at 8.30 pm.

Meanwhile, several Congress leaders, including K C Venugopal and Adhir Ranjan Chowdhury, were detained for violating prohibitory orders outside the heavily barricaded party headquarters on Tuesday, day two of Rahul Gandhi being questioned by the ED.

Among those detained were Gaurav Gogoi, Deepender Singh Hooda, Ranjeet Ranjan, Manickam Tagore and Imran Pratapgarhi. This is the second day of the Congress' protests against the questioning of Rahul Gandhi by the ED in a money laundering case related to the National Herald newspaper. Gandhi was questioned for over 10 hours on Monday. Congress has said it will not be cowed down by intimidatory tactics of arrests or "false" cases against its top leaders.

Latest Developments from the Big Story: 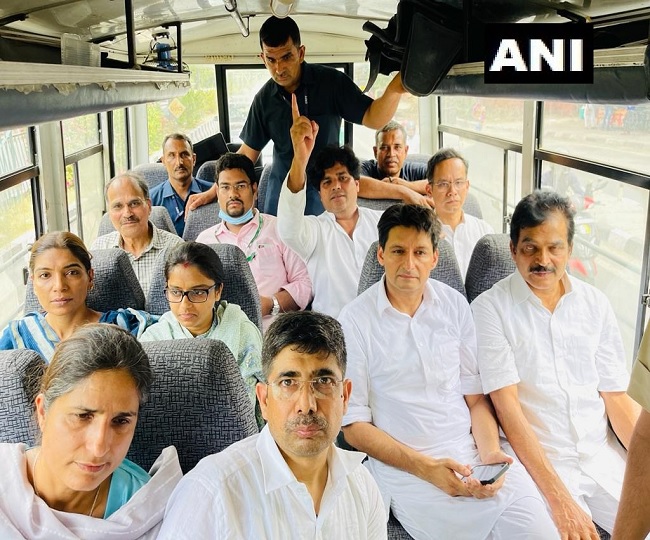 - "No one can imagine the pressure from govt on Delhi Police. We can manage with Sec 144, but you can't stop us from coming into AICC office. Situation in the country is very serious. People coming on roads on Ram Navami and Friday namaz", Rajasthan CM & Congress leader Ashok Gehlot.

- The Congress today also staged a massive protest against the questioning of Rahul Gandhi by the ED. However, the Delhi Police has detained several party leaders including Randeep Singh Surjewala as they protest outside the AICC office.

- Rahul Gandhi on Tuesday morning reached the ED office for questioning in the National Herald Case. Prior to this, the former Congress president, accompanied by his sister Priyanka Gandhi, reached AICC Headquarters where hundreds of Congress supporters welcomed them. - The Delhi Police has put up barricades at the Akbar Road in Delhi and has also imposed Section 144 of the CrPC in the area ahead of Rahul Gandhi's questioning by the Enforcement Directorate in the National Herald Case. 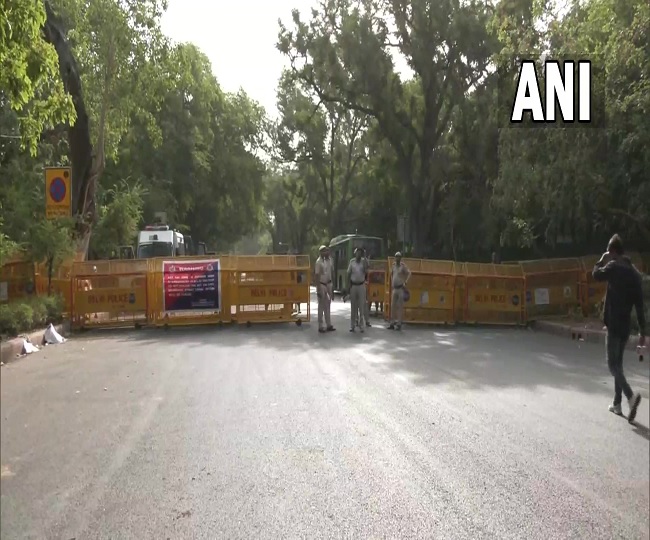 - The Delhi Traffic Police has also issued a travel advisory for the commuters in wake of the proposed protest march by Congress leaders against Rahul Gandhi's questioning by ED.

- Following the day-long protest, the Congress party said that senior leader and former Union Minister P Chidambaram suffered a fracture in his left rib after he was pushed away by Delhi Police during the party's protest in support of Rahul Gandhi. "When three big, burly policemen crash into you, you are lucky to get away with a suspected hairline crack! Doctors have said that if there is a hairline crack, it will heal by itself in about 10 days. I am fine and I will go about my work tomorrow," Chidambaram tweeted.

When three big, burly policemen crash into you, you are lucky to get away with a suspected hairline crack!

Doctors have said that if there is a hairline crack, it will heal by itself in about 10 days

I am fine and I will go about my work tomorrow

- Speaking on the matter on Monday, Rajasthan Chief Minister Ashok Gehlot, who is also in Delhi to extend support to Gandhi, said, "This kind of behaviour is not good. People will not like it. Nobody should have any objection if the law will take its own course. But we object to the misuse of ED, CBI and IT that is being done."

- Rahul Gandhi, the 51-year-old politician, who entered the headquarters of the federal probe agency in central Delhi around 11 am after starting from the Congress office on Akbar Road, was accompanied by a large group of party leaders including Priyanka Gandhi Vadra, Rajasthan Chief Minister Ashok Gehlot, and Chhattisgarh CM Bhupesh Baghel.

- He is being questioned by an Assistant Director level officer-- the investigating officer of the case--supervised by a Deputy Director and a Joint Director. Another officer is learnt to be typing Rahul Gandhi's statement which is being recorded under Section 50 of the Prevention of Money Laundering Act.

- The probe is related to alleged financial irregularities in the party-promoted Young Indian that owns the National Herald newspaper, published by the Associated Journals Limited (AJL). Congress chief Sonia Gandhi and Rahul Gandhi are among the promoters and shareholders of Young Indian.