Puducherry Political Crisis: President's rule was enforced on Thursday in Puducherry after the opposition refused to stake claim following the collapse of Congress government in the UT.

The President's rule was enforced in the UT after the opposition, which including the Bharatiya Janata Party (BJP) and All India Anna Dravida Munnetra Kazhagam (AIADMK), refused to stake claim in Puducherry following the Congress collapse. 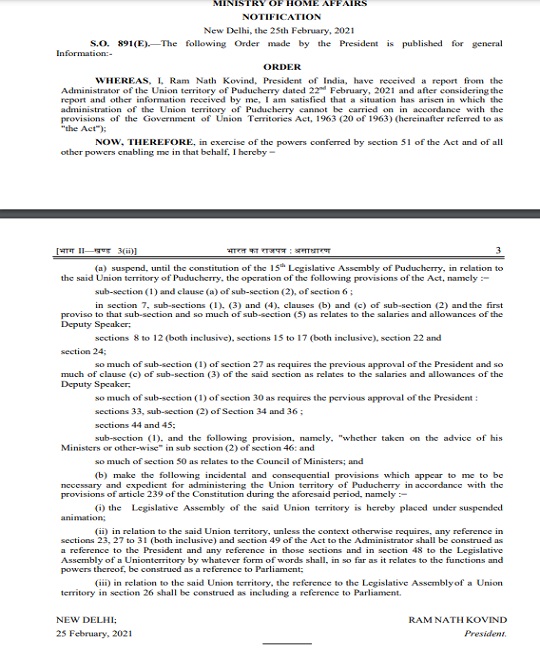 "We will not try and form a government at this stage. With the people’s blessings in the forthcoming elections and PM Modi's leadership, the NDA will form a government with BJP and its alliance partners All India NR Congress and AIADMK in May and build a new bright future for the people of Puducherry," said BJP state unit president V Saminathan earlier.

The Congress government in Puducherry fell on Monday after Chief Minister V Narayanasamy resigned ahead of the confidence vote in the Assembly with the coalition ministry reduced to a minority due to a spate of resignations of party MLAs and a DMK legislator recently.

Narayanasamy met Lt Governor Tamilisai Soundararajan and submitted the resignation of his four-member cabinet, ahead of the Assembly elections due in April-May.

With the exit of the Congress government here, Punjab, Rajasthan and Chhattisgarh are the only three states in the country ruled by the party on its own.

Holding that Speaker V P Sivakolundhu did not put to vote the motion moved by him for a confidence vote, the Congress veteran said the former's ruling that it stood defeated was "incorrect and invalid."

Legal experts would be consulted on the matter, he said while dubbing the turn of events, surrounding the issue of voting rights of nominated members, BJP in this case, as a "murder of democracy."

DMK chief M K Stalin, whose party is an ally of the Congress here, also slammed the opposition for the fall of the government and hailed Narayanasamy for "upholding democracy."

Earlier, Narayanasamy met Soundararajan and submitted the resignation of his cabinet, even as the ruling side's strength slid to 11 as against the opposition's 14.