The warning led to chaos in the mall and police rushed to the spot and got the entire complex vacated.

Chandigarh | Jagran News Desk: A bomb threat was called in on Monday at the Elante Mall in Chandigarh, which led to chaos in the entire city.

According to media reports, the warning led to chaos in the mall and police rushed to the spot and got the entire complex vacated. The bomb squad searched the entire Elante Mall, and it later turned out to be a hoax call.

Police are now looking out for the person who tipped them off. According to media reports, the call was made through internet.

"A PCR call was received at 1:06 pm today regarding information about bomb in the mall. We evacuated the mall, conducted a thorough search and santisation operation," said SP (Crime) Vineet Kumar.

"After 4 hours, we've completely searched the premises of Elante Mall. We haven't found anything objectionable. We're in the process of registering a case. Legal Action will be taken against the caller. Mall will be opened soon," he added.

Earlier, it was reported it was a mock drill carried out by the police ahead of the Independence Day. However, SSP (Traffic) Chandigarh Shashank Anand clarified that it was not a mock drill and asked people to cooperate. 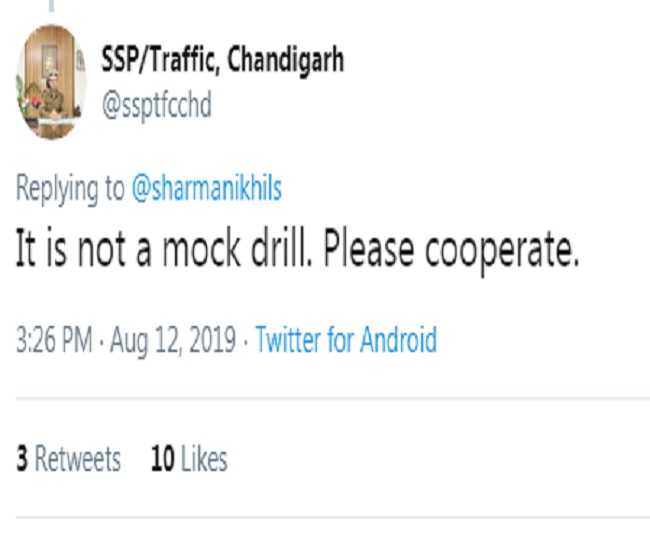 As it's a public holiday today on the occasion of Eid-al-Adha, the mall was thronged by thousands of people. Elante is India's ninth largest shopping mall and second largest in northern India.

The incident comes in wake of the security forces being on high alert in view of Eid-al-Adha which is celebrated and the Independence Day.

According to a Times of India report, seven JeM fidayeen terrorists have already sneaked into Indian territories and are planning to attack either on Eid or ahead of Independence Day.

Earlier this month, the government had called off the Amarnath Yatra after the Indian Army warned of terrorists planning to attack pilgrims and tourists in Jammu and Kashmir.

The intelligence inputs about the possible terror attack has come barely a week after the the Indian government revoked Article 370, which gave special status to Jammu and Kashmir, and converted the state into two Union Territories -- Jammu & Kashmir and Ladakh.

Pakistan aggressively retaliated against the move, degrading diplomatic ties with India, suspending trade ties and bus and train services between the two countries.