Modi in US: PM concludes his 3-day US trip, boards plane at JFK Airport to leave for India | As it happened

Modi in US: In his address at the UNGA, PM Modi lauded his initiative to provide anti-COVID-19 vaccines to other countries and said that development "should be all-inclusive, universal and one that nurtures all".

New York (USA) | Jagran News Desk: Prime Minister Narendra Modi is addressing the 76th session of the United Nations General Assembly (UNGA) on Saturday. In his address at the UNGA, PM Modi lauded his initiative to provide anti-COVID-19 vaccines to other countries and said that development "should be all-inclusive, universal and one that nurtures all".

Taking a dig at Pakistan and its Prime Minister Imran Khan, PM Modi also said that it is "absolutely essential" to ensure that Afghanistan territory is not used to spread terrorism and for terrorist activities. He also said that people of Afghanistan, women and children, minorities need help that should be provided to them.

22:19 hours: Also Read -- Meets with Joe Biden, Kamala Harris, Quad summit and UNGA address: What PM Modi did during his 3-day US visit 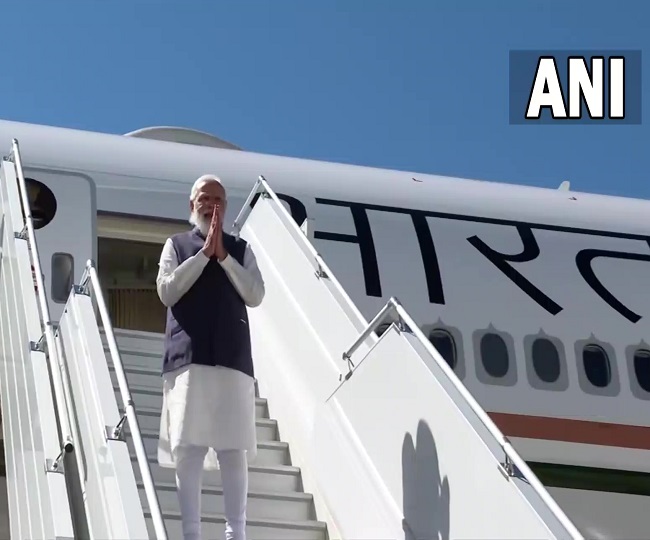 20:51 hours: PM Modi meets people gathered outside his hotel in New York. He is about to depart for John F Kennedy International Airport from where he will leave for India. 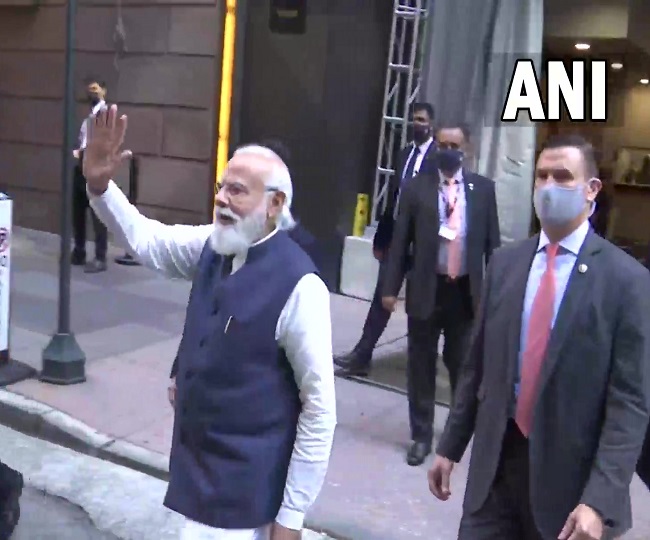 20:16 hours: It's the 1st time an Indian PM has shared a meeting at UNSC. It's also the 1st time that India, or any country,has successfully steered a UNSC debate on maritime security and come up with an outcome document which is being referred to as guiding principle on this issue, says Foreign Secretary Harsh Vardhan Shringla.

20:13 hours: PM also spoke about UNSC, in particular, our contribution to the issue of maritime security in the UNSC. We had held the Presidency of Security Council, a very successful Presidency, says Foreign Secretary Harsh Vardhan Shringla.

Our Permanent Representative has to take a great amount of that credit for Presidency that outlined shaped thinking in many new areas, the highlight for which was PM sharing the open debate in Security Council on the issue of maritime security, he added.

20:03 hours: Unity is very pertinent when it comes to Afghanistan... The Quad meeting was very useful in putting together the objectives the leaders had for Afghanistan, says Foreign Secretary Harsh V Shringla.

20:00 hours: It has been a comprehensive and useful visit which allowed for high-level interactions, says Foreign Secretary Harsh V Shringla.

19:30 hours: Welcomed PM Narendra Modi to the General Assembly Hall, ahead of his address to General Debate UNGA76. India is fully committed to multilateralism and to the United Nations. I thanked him for the continued support to the Presidency of Hope, says Abdulla Shahid, President of the UNGA76. 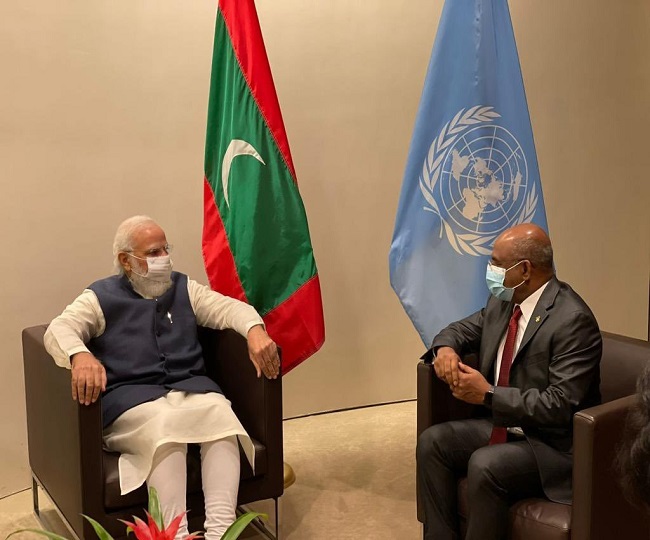 19:01 hours: Our oceans are also the lifeline of international trade. We must protect them from the race for expansion. The international community must speak in one voice to strengthen a rule-based world order, says PM Modi.

18:58 hours: It is absolutely essential to ensure that Afghanistan's territory is not used to spread terrorism and for terrorist activities, PM Modi says.

We also need to ensure that no country tries to take advantage of delicate situation in Afghanistan and use it for its own selfish interests. At this time, people of Afghanistan, women and children, minorities need help. We must fulfill our duties by providing them with help, he added.

18:57 hours: We have also started work on making India the world's largest green hydrogen hub. We are answerable to our future generations. Today, the world is facing an increased threat of regressive thinking and extremism, says PM Modi.

In such a situation, the entire world must make science-based, rational and progressive thinking the basis for development. In order to strengthen a science-based approach, India is promoting experience-based learning, he added.

18:55 hours: On the ocassion of 75 years of independence, India is going to launch 75 satellites into space made by Indian students, says PM Modi.

18:55 hours: The Corona pandemic has taught the world that the global economy be further diversified. That is why the expansion of global value chains is very important. Our 'Aatmanirbhar Bharat Abhiyaan' is inspired by this sentiment, says PM Modi.

18:52 hours: Yes, democracy can deliver. Yes, democracy has delivered. Today is birth anniversary of Pandit Deen Dayal Upadhyaya, the proponent of 'Ekatma Manav Darshan', meaning integral humanism or the development journey taken together, the expansion from self to universe, says PM Modi.

It is with the principle (of 'antyodaya' -- where no one is left behind) in mind that India today is moving forward on path of integrated equitable development. Our priority is that development should be all inclusive, all pervasive, universal and one that nurtures all, he added.

18:49 hours: I would like to inform the UNGA that India has developed the world's first DNA vaccine. This can be administered to anyone above the age of 12. An mRNA vaccine is in the final stages of development. Indian scientists are also developing a nasal vaccine against COVID19, says PM Modi.

18:45 hours: Development should be all-inclusive, universal and one that nurtures all, says PM Modi.

18:38 hours: In the last 1.5 years, the entire world has been facing the worst pandemic in 100 years, I pay tribute to all those who have lost their lives in this deadly pandemic and I express my condolences to their families, says PM Modi. 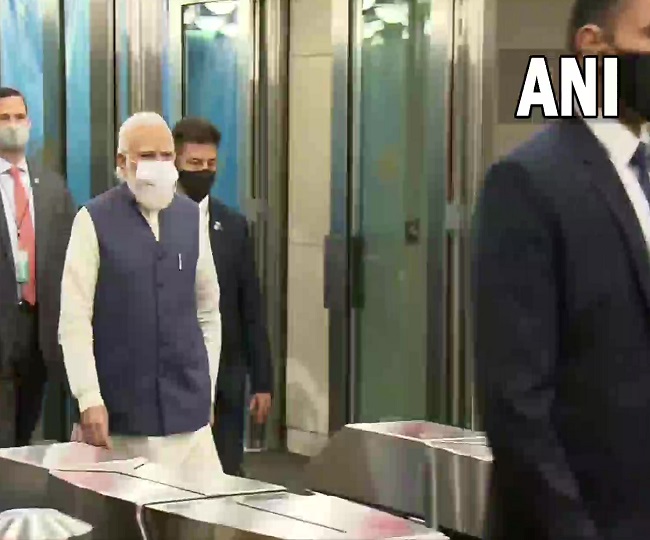 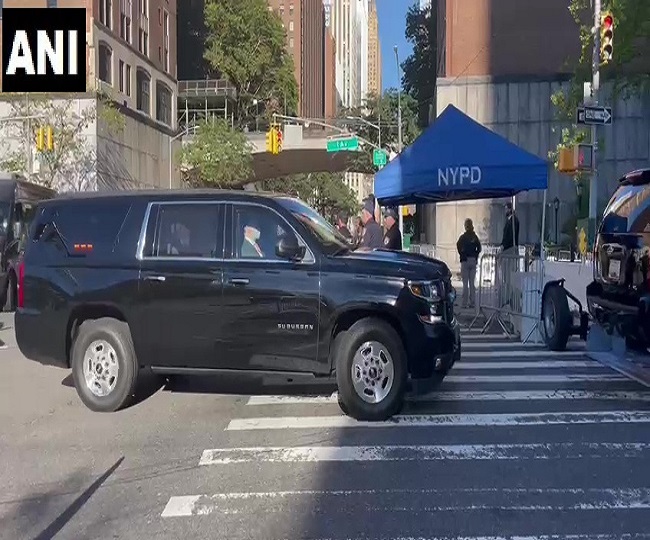 18:27 hours: PM Modi might also speak about the COVID-19 crisis and India's decision to provide vaccines to other countries.

18:22 hours: PM Modi had also taken part in the Quad summit on Friday where the leaders of India, the US, Australia and Japan had called for free and open Indo-Pacific region "undaunted by coercion".

18:21 hours: It is expected that PM Modi might also speak about the Indo-Pacific amid China's increasing assertiveness in the region.

18:18 hours: It is expected that PM Modi will speak about the situation in Afghanistan. During the SCO Summit in September, he had said that countries must ensure that the Afghan soil is not used for terrorism against any other country.

18:15 hours: Members of the Indian diaspora gather outside the hotel in New York from where PM Narendra Modi will depart for the United Nations. 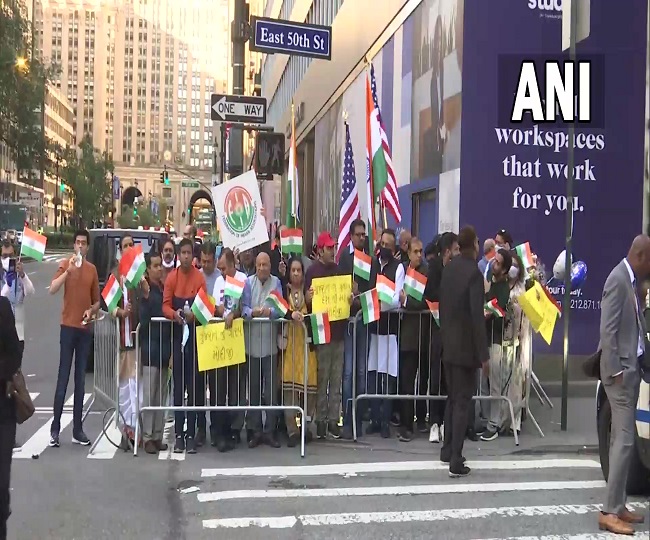 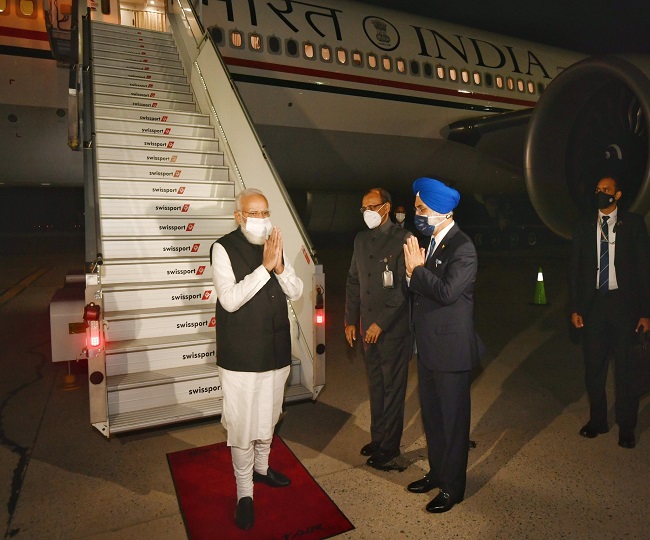 18:05 hours: This is the first since the beginning of the COVID-19 pandemic that PM Modi will address the UNGA session in person.