'Kashi becoming medical hub of Purvanchal, no need to go to Delhi, Mumbai for treatment': PM Modi in Varanasi | Highlights

PM Modi in Varanasi: The projects include a 100-bed model maternal and child health (MCH) wing at the Institute of Medical Sciences of the BHU, multi-level parking facilities, highway development projects, and tourism projects.

The Prime Minister was received by Uttar Pradesh Chief Minister Yogi Adityanath, Governor Anandiben Patel and other dignitaries of the state government. PM Modi's visit to Varanasi came ahead of the Uttar Pradesh Assembly Elections scheduled to be held next year.

Here are the Highlights from PM Modi's Varanasi visit:

12:16 pm: He (CM Yogi Adityanath) is quickly moving forward in making a modern UP, there is rule of law in UP today. 'Mafia raj' and terrorism have been brought under control. Today, criminals who cast an eye on women know that they won't be able to hide from the law: PM Modi in Varanasi.

11:41 am: PM Modi addresses Varanasi. Ro-Ro vessels facilities that begin today will help the tourism sector in Kashi thrive further. Our boatmen are also being given better facilties. Diesel boats are being converted into CNG. This will bring down their expenses, benefit the environment & attract the tourists: PM

11:10 am: Prime Minister Narendra Modi landed in Varanasi a short while ago. He was received at the airport by UP Governor Anandiben Patel, CM Yogi Adityanath and other dignitaries as well as officials: Prime Minister's Office (PMO) 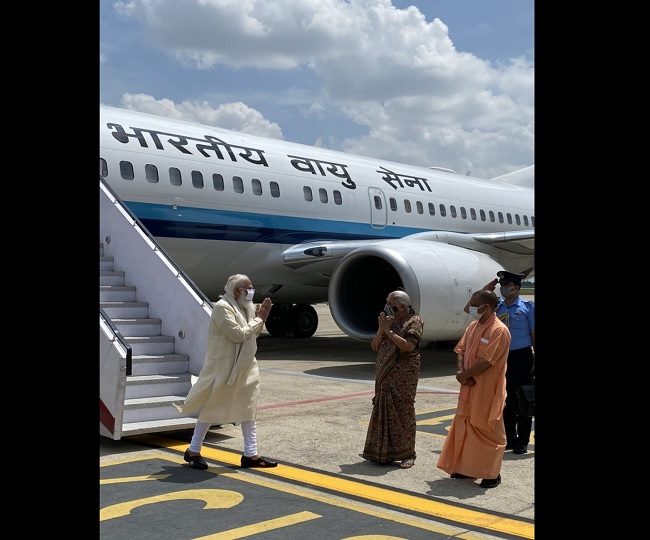 He will first inaugurate multiple public projects and works that include the MCH wing at the BHU hospital, a multi-level parking facility at Godauliya, Ro-Ro vessels for tourism development on the Ganga river, and a three-lane flyover bridge on the Varanasi-Ghazipur highway. The total worth of these projects is around Rs. 744 crore, the PM office said.

PM Modi will then proceed to laying the foundation stones for other public projects and works that include Centre for Skill and Technical Support of Central Institute of Petrochemical Engineering and Technology (CIPET), 143 rural projects under Jal Jeevan Mission, and a mango and vegetable integrated packhouse in Karkhiyanv. The total cost of these projects is around Rs 839 crore, the PM office said.