On the ocassion of the 74th Independence Day, tricolour was hoisted at Srinagar's historic Lal Chowk without any protests or incidents of stone pelting.

Along with his tweet, the BJP leader also shared a viral image of tricolor at the clock tower of Lal Chowk.

"Modi hai to mumkin hai (it is possible if there is Modi)," the BJP leader boasted and thanked the people of the country for electing Narendra Modi as the prime minister of India.

Lal Chowk #Srinagar which had remained as symbol of #AntiIndia campaign by dynast politicians & #Jihadist forces, has now become Crown of Nationalism.#modihaitomumkinhai

However, the image being is old and altered to set a particular narrative. When reverse searched, it was found out that the image is from 2010. In the original image, there was no flag at the clock tower of Lal Chowk. Which means the flag was added later using editing tools.

In the original image posted on July 11, 2010, the positioning of the man walking past the clock tower is the same as shown in the viral image. Which means the image was altered and probably photoshopped. 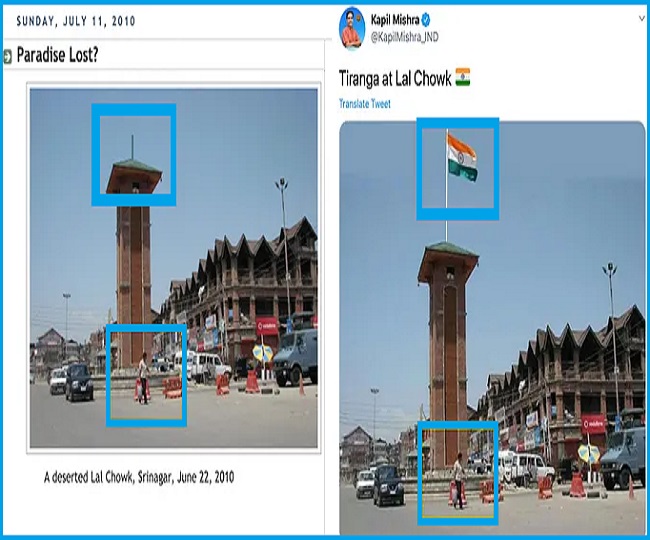 The viral image was also shared on social media by several users along with the same narrative.

All thanks to @narendramodi ji ❤️ pic.twitter.com/gRGwjn2kQa

"Feeling so much proud & so happy when I saw our nation flag hoisted with full swing in Lal Chowk of Srinagar after the abrogation of Article 370... that's the dream of Shyama Prasad Mukherjee," a Twitter user wrote along with the viral image.

(Disclaimer: This story has been updated as per the latest information as per the policy of Jagran.)