In his letter, Sameer Wankhede stated he came to know that some "precipitate" legal action for falsely implicating him is being planned by unknown persons in relation to the alleged vigilance related issue in NCB Cr. N. 94/2021.

Mumbai | Jagran News Desk: Sameer Wankhede, Mumbai zonal director of the Narcotics Control Bureau (NCB), on Sunday wrote a letter to Mumbai Police and sought protection from any legal action against him by "unknown persons" to falsely frame him concerning an alleged vigilance related issue.

In his letter to Police Commissioner Hemant Nagrale, Wankhede stated he came to know that some "precipitate" legal action for falsely implicating him is being planned by unknown persons in relation to the alleged vigilance related issue in NCB Cr. N. 94/2021.

"It is also brought to your notice that threat of jail and dismissal have been issued against the undersigned on public media by highly respectable public functionaries," Wankhede said. 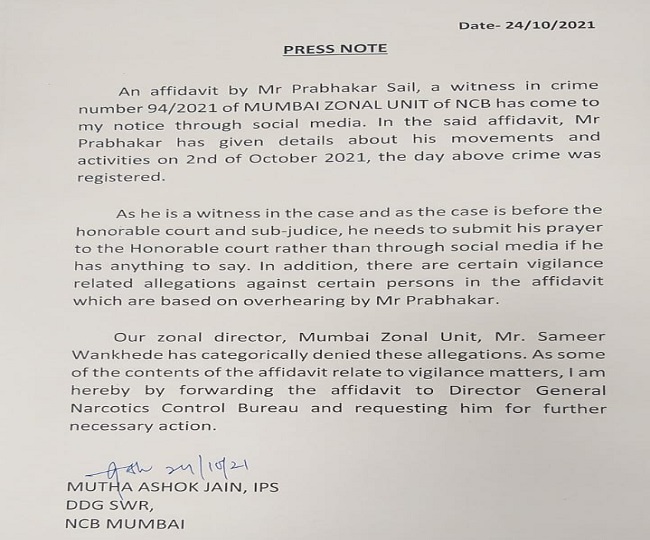 Wankhede's letter comes hours after an 'independent witness' claimed that Rs 25 crore was demanded by an NCB official and other persons, including absconding witness KP Gosavi, to let off Aryan Khan, who was arrested in the Mumbai cruise drugs case.

Prabhakar Sail, the 'independent witness', told media persons that he had overheard Gosavi telling one Sam D'Souza over the phone after Aryan Khan was brought to the NCB office after the October 3 raid about a demand of Rs 25 crore and to settle at Rs 18 crore as they "have to give Rs eight crore to Sameer Wankhede", the zonal director of NCB.

He also claimed NCB officials had asked him to sign nine to ten blank papers. However, the NCB has denied the allegations, terming them as "completely false and malicious".

An NCB team led by Wankhede earlier this month allegedly seized drugs onboard a cruise ship off the Mumbai coast following which Aryan Khan was arrested on October 3. He is currently lodged in the Arthur Road jail in Mumbai. His bail application is likely to be heard by the Bombay High Court on October 26.