Mumbai Drugs Cruise Case: Aryan Khan in his bail application has told Bombay High Court that the NCB is "misinterpreting his WhatsApp chats" to implicate him in the drugs case.

Mumbai | Jagran News Desk: The Bombay High Court on Tuesday adjourned the hearing of the bail application of Bollywood megastar Shah Rukh Khan's 23-year-old son Aryan, who has been arrested by the Narcotics Control Bureau (NCB) following a raid at an alleged rave party on a cruise ship near Mumbai, till October 27. Aryan has been in custody for nearly three weeks and is lodged at Mumbai's Arthur Road jail as his bail application has been rejected by both the special NDPS court and the magistrate court.

Aryan in his bail application has told Bombay High Court that the NCB is "misinterpreting his WhatsApp chats" to implicate him in the drugs case. However, the NCB has claimed that Aryan was regularly involved in drugs and was supplied with it by co-accused Aachit Kumar.

Here are the Latest Updates from the big story:

- BREAKING: Hearing on bail application of accused Aryan Khan has been adjourned till Wednesday by the Bombay High Court.

- I've filed a rejoinder that I'm making no allegation against any NCB Officer. I did this after NCB filed an affidavit on one of the Panch's allegations which have blamed one Pooja who is connected with me etc -former Attorney General of India Mukul Rohatgi argues for Aryan Khan

- I am not concerned with all that unsavoury controversy and I have no complaints against anyone from NCB or prosecution. Here we stand and I think that it's a fit case of bail - former Attorney General of India Mukul Rohatgi concludes his arguments for Aryan Khan

- There was no mention of seizure of mobile phone in Punchnama. We're clear about what happened on 2 October - how we go there, how we were arested... Law provides that for small quantities, max punishment is 1 year (jail). For consumption, there's rehabilitation as per law, says Mukul Rohatgi.

- I made this clear with my rejoinder that I am nowhere connected to all these allegations and counter-allegations. I am nowhere in all this ongoing controversy. My case is very much on merits which are in my favour, says Mukul Rohatgi.

- There was something filed by someone alleging something against NCB, and Director had filed an affidavit that it was due to a political personality whose son-in-law was arrested by NCB. It is all being portrayed that I was involved in this, says Mukul Rohatgi.

- I've no case of consumption, possession, purchase or sale against me. You can see the Punchnama and the rejoinder filed by me. I'm not concerned with any controversy going on the TV, Social media or anywhere else. I don't have anything against any NCB Officer, says Mukul Rohatgi.

- There's one more thing put against me (Aryan) - my WhatsApp chats of 2018, 2019 and 2020. These chats are not related to Cruise case. Cruise case started with Gaba (Pratik Gaba) and ended there. There is no connection between my chats and present case of Cruise, says Mukul Rohatgi.

- 2nd thing put against me (Aryan), is important that many othres were found with some amount of drugs so they allege that there was a general conspiracy. They're not charging me with consumption or possession but with conspiracy and conspiracy not with accused 2 but others, says Aryan Khan's lawyer Mukul Rohatgi.

- How can I be charged with conscious possession if someone carried something in his shoes, says Aryan Khan's lawyer Mukul Rohatgi.

- As there was no recovery no consumption, I say that I'm (Aryan Khan) arrested wrongly. What is put against me is that accused 2 (Arbaaz Merchant) came with me and was having something with him. So I am charged with conscious possession of drugs, says Aryan Khan's lawyer Mukul Rohatgi.

- In his affidavit in Bombay High Court, Aryan Khan has said that he has no connection with Prabhakar Sail or his employer Kiran Gosavi.

- NCB has opposed Aryan Khan's bail application. "There is an international drug racket going on and the agency needs time to unearth it. If given bail, Aryan can affect the investigation, influence the witnesses and tamper with the evidence," it said in its affidavit.

- KP Gosavi didn’t transfer to me the fixed amount of money. He asked me to go Haji Ali and then pick up the money... I've no connection with any leader. There is no offence against me. I will be going to MRA police station, says witness Prabhakar Sail.

- Why should we go to court? Those levelling allegations against us should go to court. We are not 'crorepatis', we are simple people. Sameer is an honest officer. Many people wish that he should be removed, says Sameer Wankhede's wife Kranti Redkar.

- Nawab Malik's letter has "no merit... My husband is not wrong, we will not tolerate this", says Sameer Wankhede's wife Kranti Redkar. 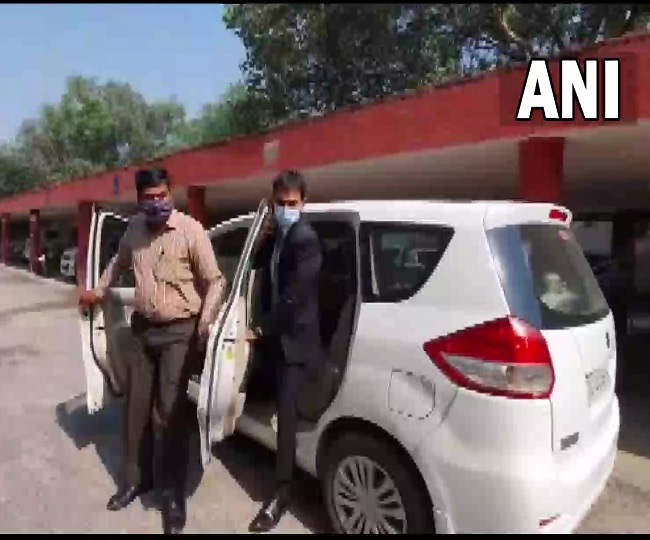 - I have seen the letter. We will take necessary action, says NCB's Mutha Ashok Jain on Maharashtra Minister Nawab Malik sharing a letter claiming fraud within the agency.

- The letter sent to me by an unnamed NCB official claims that a number of people have been framed in false cases... Panchnamas were drafted at NCB office. We demand an investigation into this, says Maharashtra Minister Nawab Malik.

- I have received a letter from an unnamed NCB official. I am sending this letter to DG Narcotics requesting him to include this letter in the investigation being conducted on NCB's Sameer Wankhede. We demand there should be a probe, says Maharashtra Minister Nawab Malik.

- I will appear for Aryan Khan in his bail matter today in Bombay High Court, says former Attorney General of India Mukul Rohatgi.

- Also Read -- 'Allegations against me are baseless': Sameer Wankhede denies being summoned by NCB in Mumbai drugs-on-cruise case

- I am with SRK. Aryan Khan should be given bail, tweets singer Mika Singh. They all are watching the drama and cannot say even a single word, he added.

- Just In: Sudha Dwivedi, a lawyer, has filed a police complaint to against NCB Mumbai's Sameer Wankhede and four others alleging "extortion by threat of accusation of an offence", reports ANI.

- According to a media report, Mukul Rohatgi will represent Aryan in the Bombay High Court today.

- Last week, Aryan's father Shah Rukh had also met him at the jail. The two had a conversation for nearly 20 minutes.

- Meanwhile, the application of Arbaaz Seth Merchant, who has also been arrested along with Aryan, has been listed at serial number 64.

- According to media reports, his application has been listed at serial number 57.

- Aryan Khan's bail application will be heard by the Bombay High Court on Tuesday.