The arrests were made after the Eklavya Singh Gaur, son of a Bharatiya Janata Party MLA Malini Laxman Singh Gaur, filed a complaint against the comedian for allegedly making indecent remarks made against Hindu deities and Union Home Minister Amit Shah during the show, news agency PTI reported.

Gaur and his associates had gone to the show as audience. They created ruckus over the comment and forced the show to stop after the comedian made the remarks.

"A case was filed late on Friday night against stand-up comedian Munawar Faruqui, a resident of Junagadh in Gujarat, and four Indore-based persons based on a written complaint filed by Eklavya Singh Gaur, who also submitted a controversial video footage of the comedy show," in-charge of Tukoganj police station Kamlesh Sharma said.

The other four people arrested based on the complaint are identified as: Edwin Anthony, Prakhar Vyas, Priyam Vyas, and Nalin Yadav. All five have been booked under IPC Sections 295-A (deliberate and malicious acts, intended to outrage religious feelings of any class by insulting its religion or religious beliefs), Section 269 (unlawful or negligent act likely to spread the infection of any disease dangerous) and other relevant provisions.

Also Read
Republic Day 2021: Know about significance and evolution of the Indian..

Gaur later told reporters, "After purchasing the tickets, my associates and I went to the comedy show, where Faruqui was performing as the main comedian. The show mocked the Hindu deities by passing indecent comments. The Godhra incident and Union Home Minister Amit Shah were also mentioned inappropriately during the show. Such objectionable talks were going on during the comedy show. We made a video of them and stopped the show by taking the audience out of the cade. Then we caught the comedians and organisers of the show and took them to Tukoganj police station."

Stand-up comedians Varun Grover and Vir Das have criticised the arrest of Faruqui and four others. 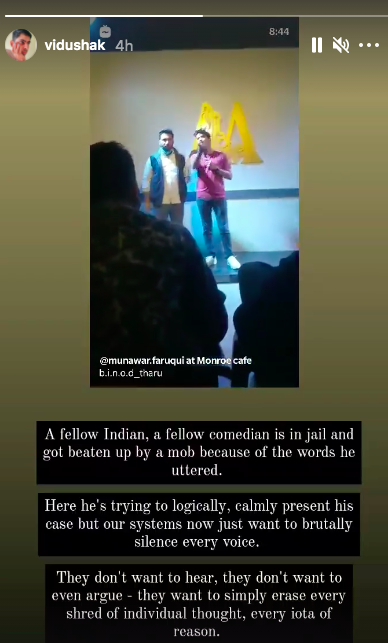 “You can’t stop jokes and laughter. Not because comedians are performing it, but because people need to laugh. Harder you try, the more you are going to be laughed at, now and by history. Anyone who has ever tried to control humour, now has a category of jokes devoted to him,” Das tweeted.