Don’t get into those maths. Those maths have never helped Einstein discover gravity, said Goyal.

“Don’t go by all these calculations you see on TV, that if the country has to become a USD 5 trillion economy, it will have to grow at 12 per cent but right now it is currently growing at 6-7 per cent,” said Goyal while interacting to reporters following a meeting with the Board of Trade (BOT).

“Don’t get into those maths. Those maths have never helped Einstein discover gravity,” Goyal added.

“If he had only gone by structured formulae and what was past knowledge, I don’t think there would have been any innovation in this world,” he added.

However, the minister later made a clarification on his statement and said that the comment he made had a ‘certain context’.

“The comment that I made had a certain context. Unfortunately, some friends have sought to remove the context, pickup one line and create a very mischievous narrative,” said Goyal in the clarification statement. 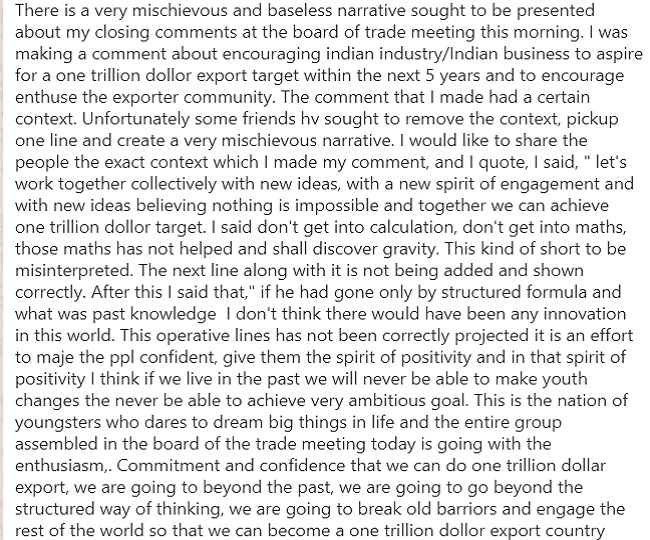 Goyal’s remark comes after Finance Minister Nirmala Sitharaman blamed the millennials' preference for ride-hailing services such as Uber and Ola over owning cars, and not high taxes, for slumping vehicle sales.

Sitharaman said millennials choosing app-based cab aggregators over committing money to EMIs for new cars had affected the auto sector, which has seen double-digit fall in sales for both two and four-wheeler manufacturers.

Opposition Congress had on Wednesday hit out at the Finance Minister over her millennials remark, saying it reflected the "inefficiency, immaturity, and inexperience" of the BJP in governance and demanded that Prime Minister Narendra Modi apologise for it.

Congress spokesperson Abhishek Singhvi, at a press conference, said Sitharaman's statement was a grave joke on the poor state of the economy.