Man, accused of killing teacher, beaten to death by mob in presence of cops in UP's Kushinagar

In a video of the incident that has surfaced on the internet, the mob can be seen beating the man with sticks.

New Delhi | Jagran News Desk: A man, accused in a murder case, was allegedly beaten to death by a mob in Uttar Pradesh's Kushinagar district on Monday. The incident took place in the presence of policemen in Rampur Bangra village which falls under Tarya Sujan police station.

In a video of the incident that has surfaced on the internet, the mob can be seen beating the man with sticks. Several cops wearing riot gear can also be seen trying to stop the attackers, but fail as the man slowly stops moving.

Police said that the man belonged Gorakhpur and had allegedly shot and killed a teacher earlier today using his father's gun.

The deceased first shot dead the teacher, identified as Sudhir alias Guddu Singh, who was sitting outside his house. He then climbed the terrace of his house, waved the gun and fired it to keep villagers away. 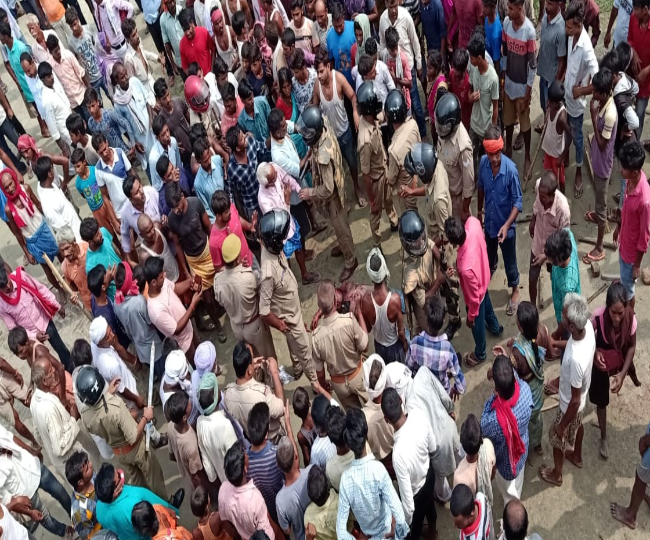 When the police arrived, he tried to surrender but was caught hold of by the villagers who started attacking him with stones and sticks. SP Vinod Kumar Mishra said that the attackers have not been identified yet.

"A man came on his scooty to meet another person identified as Sudhir Kumar Singh. He said he was a friend of Mr Singh's elder brother. He then had tea and when Sudhir Singh came out after taking bath, he fired at Mr Singh with his pistol," Mishra was quoted as saying by NDTV.

"He then tried to escape but a crowd collected outside the house and so he climbed on the terrace. He had a loaded pistol and he was firing in the air. Someone called the police and the local police station in-charge reached there. The cops climbed the terrace and asked him to surrender. There was an exchange of fire. The man then came down from the terrace and tried to bolt himself inside a room. A crowd pounced on him there and before the cops could reach him, he was trashed so badly that he died," he added.