New Delhi | Jagran News Desk: Amid the spiking number of coronavirus cases in the country, the central government announced its decision to extend the lockdown till May 17, adding that some relaxations will be given in districts that fall under the 'Orange' and 'Green' Zones. As per the data available at the Ministry of Health and Family Welfare, the dreadful coronavirus has affected nearly 40,000 people while claimed the lives of more than 1,300 people India so far. As per Health Ministry, over 10,600 people have also been cured from the deadly infection.

In its order to extend the lockdown, the government has classified entire country into three zones, ‘Red (Hotspot Districts), Orange (Low Risk Districts) and Green (Districts with no active cases)’. The classification of districts is done by the risks profiling of the districts of the country.

Meanwhile the national capital is among the worst hit states of India. Delhi ranks third on list of most number cases, with 3,738 infections recorded in the state-city so far. The number of deaths in Dehi also stood at 62.

In view of the rising cases, the government has classified all 11 districts of Delhi under the Red Zones, which accounts for maximum restrictions. The Red Zone areas will be the ones witnessing most stringent restrictions during the extended lockdown in order to break the chain of transmission of the deadly virus.

Here’s the list of Red Zone districts in Delhi: 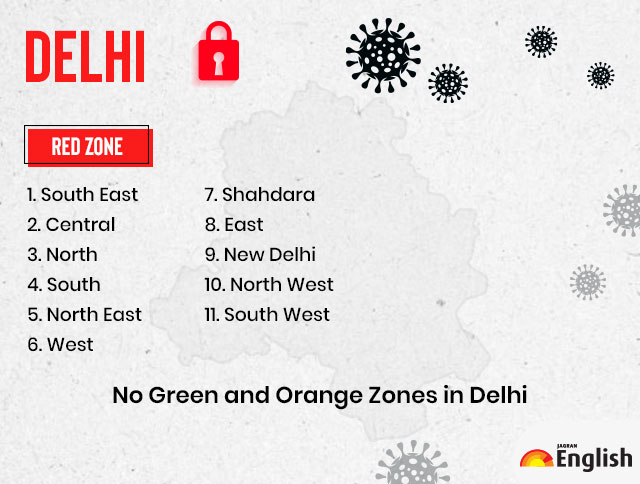 A day after the central government extended the nationwide lockdown till May 17, the Delhi government on Saturday said that all the 11 districts of the national capital will remain under red zone up till the same period.

"All 11 districts in Delhi will stay in the Red Zone till May 17. A red zone is defined where there are more than 10 cases of COVID-19 in a district. Relief measures given by Centre in red zones will be applicable here," Delhi Health Minister Satyendra Jain said as reported by ANI.

On the other hand, the North-West district has the least -- three -- containment zones. In terms of cases, North-East and South-West have the least number of positive cases, both having 66 each.