Lakhimpur Kheri Row LIVE: An SC bench headed by Chief Justice NV Ramana and comprising justices Surya Kant and Hima Kohli will hear the matter later today. The matter has been listed as 'violence in Lakhimpur Kheri (UP) leading to loss of life'.

New Delhi | Jagran News Desk: As political blame game ensued after the violence in Lakhimpur Kheri district in Uttar Pradesh killing 8 people including 4 farmers, a journalist and 3 BJP workers, the Supreme Court on Wednesday took sou moto cognisance of the incident and will hear the matter today. An SC bench headed by Chief Justice NV Ramana and comprising justices Surya Kant and Hima Kohli will hear the matter later today. The matter has been listed as 'violence in Lakhimpur Kheri (UP) leading to loss of life'.

Earlier, two apex court lawyers had written to the Chief Justice seeking a CBI probe into the matter under the supervision of the top court. The letter, written by advocates Shiv Kumar Tripathi and C.S. Panda, said, "With regard to the seriousness of the killing of the farmers in Lakhimpur Kheri in Uttar Pradesh, it is incumbent upon this Hon'ble Court to intervene in the matter as flashed in the press." The lawyers had claimed that of late, violence has become the political culture of the country.

Also Read
'Matter of concern, can have implications on existing bilateral pacts':..

Meanwhile, Congress leaders Priyanka Gandhi, who was confined to PAC guest house in Sitapur after her arrest on Tuesday, along with his brother Rahul Gandhi met the bereaved families of the farmers who were killed after they were allegedly mowed down by a car on October 3 which belonged to MoS Home Ajay Mishra Teni’s son Ashish Mishra. Besides, Rahul and Priyanka, Chhattisgarh Chief Minister Bhupesh Baghel, his Punjab counterpart Charanjit Singh Channi and Deepender Singh Hooda were part of the Congress delegation that met the bereaved family.

Here are the Latest Updates from the Lakhimpur Kheri row:

- Mohali | Punjab Congress President Navjot Singh Sidhu leads Punjab Congress to march to Lakhimpur in Uttar Pradesh today. If arrests are not made or he (MoS Teni's son) doesn't join the investigation by tomorrow, then I will sit on hunger strike, he says. 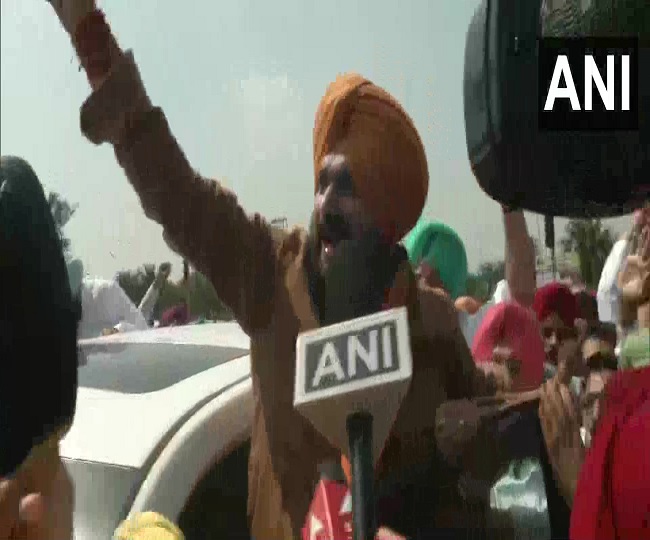 - The suo motu case by Supreme Court on the Lakhimpur Kheri deaths will be heard tomorrow.

- SC asks UP govt to explain whether accused, against whom FIR has been lodged in connection with Lakhimpur Kheri incident, have been arrested

- Lakhimpur Kheri deaths case | Supreme Court asks Uttar Pradesh Government to file a status report on who are the accused, against whom FIR is registered and those arrested.

- The district-level committee will investigate matter & submit the chargesheet in court while judicial investigation commission will conduct inquiry of the whole incident. Based on evidences, we'll soon arrest all accused involved in this incident: Laxmi Singh, IG Lucknow Range

- For an unbiased probe, district-level committee has started its work. A judicial investigation commission under Justice HC Allahabad (Retd.) formed by the govt. We've issued a WhatsApp number & appealed public to send evidences on it: IG, Lucknow Range on Lakhimpur Kheri incident

- Lakhimpur Kheri deaths case | CJI Ramana says two advocates wrote a letter to the court on Tuesday, we directed our Registry to register the letter as PIL but due to miscommunication, they registered it as a suo motu matter. Matter to be heard later today.

- Supreme Court begins hearing in the case registered by it on the violence that killed eight people in Uttar Pradesh’s Lakhimpur Kheri district on October 3.

- Justice is a right in a democracy. I will continue my fight for justice. All the affected families I met yesterday only demanded justice. The Union minister needs to resign to ensure an unbiased investigation: Priyanka Gandhi Vadra, Congress, on Lakhimpur Kheri deaths

- BJP MP Varun Gandhi demands justice in Lakhimpur Kheri (UP) deaths. "Protestors can't be silenced through murder. There has to be accountability for innocent blood of farmers that has been spilled & justice must be delivered...," he says

The video is crystal clear. Protestors cannot be silenced through murder. There has to be accountability for the innocent blood of farmers that has been spilled and justice must be delivered before a message of arrogance and cruelty enters the minds of every farmer. 🙏🏻🙏🏻 pic.twitter.com/Z6NLCfuujK

- The Supreme Court on Wednesday took suo motu cognisance of the violence that took place in the Lakhimpur Kheri district of Uttar Pradesh. A Bench of Chief Justice Nuthalapati Venkata Ramana and Justices Surya Kant and Hima Kohli will hear the matter today.

- These families don't want compensation, they want justice. It can't be possible unless he (Ajay Mishra Teni) resigns as MoS Home. Impartial probe not possible under him.If they can arrest us without FIR, why can't they arrest him(Ashish Mishra): Priyanka Gandhi Vadra in Dhaurehra

- Families' concern is that they can't understand what's written in the post mortem report. They seek justice and action against the person who is involved. Everyone knows who did it...: Congress leader Rahul Gandhi in Lakhimpur after meeting a deceased farmer's family

- Jharkhand Congress leaders were stopped near Wyndhamganj by UP Police on their way to violence hit area of Lakhimpur Kheri, late last night.

- Moradabad police, administration didn't give us permission to go further (to Lakhimpur). No reason specified...We were stopped here. Neither are they letting us go nor are they permitting us to stay here...They will drop us back to the border: Congres leader Sachin Pilot on Wednesday night.