Lakhimpur Kheri Row LIVE: The Supreme Court on Thursday took suo moto cognisance of the matter and asked the UP govt to file a status report by Friday about the people named by the police in the FIR

New Delhi | Jagran News Desk: The Supreme Court on Friday said it is "not satisfied with the steps taken by the state" in the Lakhimpur Kheri violence case, and expected a responsible government, system and police. The top court also observed that handing over the case to the CBI was not the solution.

A bench headed by Chief Justice N.V. Ramana and comprising Justices Surya Kant and Hima Kohli said: "We are not satisfied with the action taken by the state". On the non-arrest of Ashish Mishra, son of Union Minister Ajay Mishra, the bench queried Salve, "Is this the way you treat the accused in other cases as well?...Sending notice". The bench told Salve, "When there is a serious allegation of murder and gunshot injury, how the accused in other parts of the country are treated.

Please tell us."The bench further queried senior advocate Harish Salve, representing the Uttar Pradesh government, that has the state government made a request to give the case to the CBI? Salve replied that it is entirely in their hands. However, the bench told Salve: "CBI is also not a solution and you know the reason why...You find out better mode".

Here are the Updates from the hearing on Lakhimpur Kheri Row:

- Uttar Pradesh Police pastes another notice outside the residence of Union Minister Ajay Kumar Mishra in Lakhimpur Kheri, asking his son Ashish Mishra to appear before it on 9th October, 11am, in connection with the violence

- Lakhimpur's incident is unfortunate & investigation is underway on it. Guilty will not be spared. We want to ensure people of the state that at no cost culprits will be spared & no post or pressure will be of use for accused: Uttar Pradesh Deputy CM Keshav Prasad Maurya

- Supreme Court notes that senior advocate Harish Salve appearing for the Uttar Pradesh government has assured it that the highest police officer in the State will be informed to preserve the evidence in the case.

- Supreme Court says that a CBI probe is also not a solution and the reason is known.

- Supreme Court says the Uttar Pradesh government to apprise the court of an alternative agency which can conduct the probe.

- CJI tells Uttar Pradesh to ask its DGP to ensure that the evidence in the case is protected till the time another agency takes it over.

- Supreme Court says it is a brutal murder of eight persons and the law must take its course against all accused. Court further says that it hopes that the UP government will take necessary steps due to the sensitivity of the issue.

- Supreme Court asks Uttar Pradesh government when there is a serious allegation of death or gun shot injury will the accused in this country be treated the same way?

- Harish Salve representing UP govt tells Supreme Court that post mortem did not show any bullet wounds, that is why the notice was sent to him.

- Samajwadi Party Chief Akhilesh Yadav is on his way to Bahraich to meet families of two farmers who lost their lives in Lakhimpur Kheri violence. SC has taken cognizance of the incident,now there is hope that the affected families will get justice...MoS Home should resign, he says.

- A Shiromani Akali Dal delegation arrives at Lucknow airport, to visit Lakhimpur Kheri to meet families of farmers who lost their lives in recent violence. Govt hasn't been listening to farmers, & now farmers have been killed; We stand with farmers: Harsimrat Kaur Badal, SAD leader

A Shiromani Akali Dal delegation arrives at Lucknow airport, to visit Lakhimpur Kheri to meet families of farmers who lost their lives in recent violence

Govt hasn't been listening to farmers, & now farmers have been killed; We stand with farmers: Harsimrat Kaur Badal,SAD leader pic.twitter.com/WBCAqQ93Sb

- Lakhimpur Kheri: BSP leader Satish Chandra Mishra met the family members of farmer Lovepreet Singh who lost his life in the violence on Sunday. "We stand with them and will provide legal aid whenever needed," he said.

"We stand with them and will provide legal aid whenever needed," he said. pic.twitter.com/SVR13T2Swy 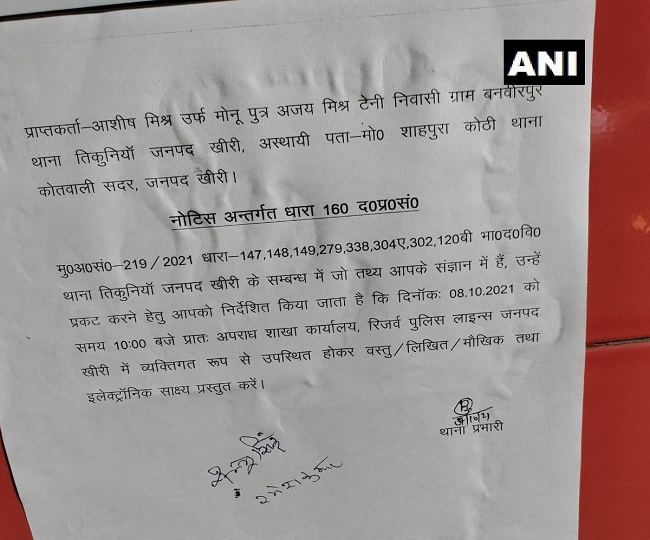 - "The accused named in the FIR have been called for questioning. If they don't turn up, we'll go to court and follow up the legal process. Teams have been set up for arrest and for questioning the accused," Lucknow Inspector General of Police (IGP) Lakshmi Singh was quoted as saying by news agency ANI.

- Congress leader Priyanka Gandhi Vadra, who arrived here on Thursday to meet the families of two farmers killed in the Lakhimpur Kheri violence, said by allowing Union minister Ajay Kumar Mishra to continue on the post, the Centre is giving the message that those in power can do anything. The Union minister's son, Ashish Kumar Mishra, and others have been booked in connection with the Lakhimpur Kheri violence that erupted during a farmers' protest on Sunday.