Lakhimpur Kheri Violence: Launching a scathing attack at the BJP, Akhilesh Yadav alleged that the Yogi Adityanath government is "hiding" something and asked why it was stopping political leaders from visiting Lakhimpur Kheri.

Lucknow | Jagran News Desk: Samajwadi Party chief Akhilesh Yadav on Monday was taken in "preventive" custody after he staged a dharna outside his residence in Lucknow after being stopped by the Uttar Pradesh Police from visiting Lakhimpur Kheri where eight people, including four farmers, died on Sunday during a protest against Minister of State for Home Affairs Ajay Kumar Mishra.

Launching a scathing attack at the Bharaitya Janata Party (BJP), the former Uttar Pradesh Chief Minister alleged that the Yogi Adityanath government is "hiding" something and asked why it was stopping political leaders from visiting Lakhimpur Kheri.

"Even Britishers would not have committed the kind of atrocities this government is committing against farmers. MoS Home Ajay Mishra and Deputy Chief Minister (Keshav Prasad Maurya) should resign. Rs 2 crores and government job should be given to next of kin of the farmers who died," he was quoted as saying by news agency ANI.

Police take Samajwadi Party president @yadavakhilesh into custody outside his residence where he staged a sit-in protest after being stopped from going to #LakhimpurKheri where 8 people died in violence yesterday#LakhimpurKheriViolence Updates: https://t.co/TQMVofx4A5

While Akhilesh staged a dharna along with hundreds of his supporters, a police vehicle, which was parked around 200 metres away from his residence, was allegedly set on fire by some unknown people, reported news agency IANS. The video of the incident has also gone viral, however, Jagran English cannot independently verify its veracity.

Currently, hundreds of police personnel and paramilitary forces have been deployed outside Akhilesh's residence at Vikramaditya Marg in Lucknow. The officials have also placed barricades to prevent traffic movement and avoid any untoward incident. 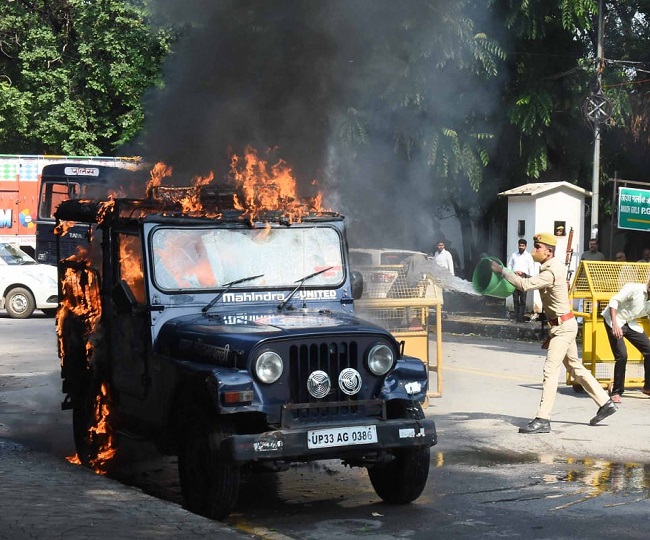 Meanwhile, the Congress on Monday morning also claimed that Priyanka Gandhi Vadra has been arrested by the Uttar Pradesh Police. The grand old party also alleged that she was manhandled by the cops while she was on her way to Lakhimpur Kheri.

"Finally that happened, what was expected from BJP. In the democratic country of 'Mahatma Gandhi', the worshipers of 'Godse' have arrested our leader @priyankagandhi Ji who fought with heavy rains and police force to meet the 'Annadata', from Hargaon. This is just the beginning of the fight!! Kisan Ekta Zindabad," tweeted Youth Congress president Srinivas BV.

Eight people were killed on Sunday as violence erupted during a farmers' protest, claiming the lives of both farmers and BJP workers ahead of a visit to Lakhimpur by Uttar Pradesh Deputy Chief Minister Keshav Prasad Maurya.

Four of the dead were people in the cars, apparently a part of a convoy of BJP workers who had come to welcome the UP minister. They were allegedly thrashed to death.The four others were farmers, the officials said.