Defence Minister Rajnath Singh paid tribute to soldiers who lost their lives in the 1999 Kargil War and laid a wreath at the National War Memorial in Delhi, on July 26.

A wreath laying ceremony was held at Kargil War Memorial in Drass to pay tribute to soldiers who lost their lives in the 1999 Kargil War on the 23rd Kargil Vijay Diwas.

26 July, which is marked as Kargil Vijay Diwas, is celebrated to honour the sacrifice of the soldiers who laid down their lives in the line of duty during the Kargil War.

The entire nation is bowing down to the valour and victory of the Indian Army. Through #KargilVijayDiwas we remember their sacrifices with a sense of gratitude: General Officer Commanding-in-Chief (GOC-in-C) Northern Command, Lt General Upendra Dwivedi in Drass, Kargil pic.twitter.com/6tvCuDrkI8

Meanwhile, Defence Minister Rajnath Singh paid tribute to soldiers who lost their lives in the 1999 Kargil War and laid a wreath at the National War Memorial in Delhi, on July 26. 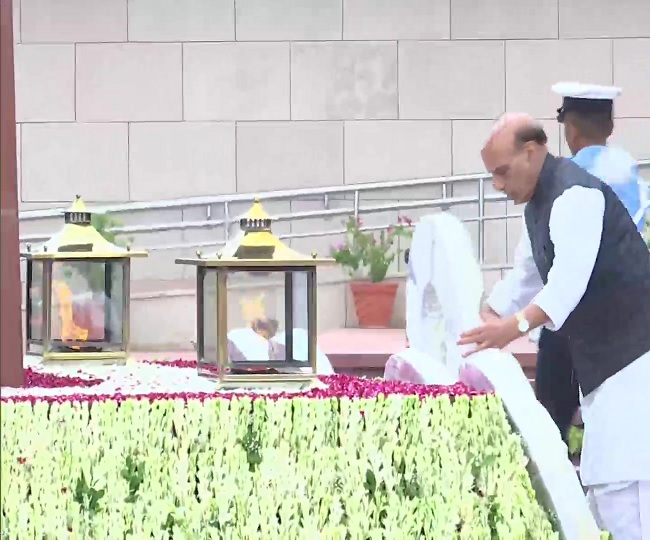 Defence Minister Rajnath Singh pays tribute to soldiers who lost their lives in the 1999 Kargil War and lays a wreath at the National War Memorial in Delhi, on #KargilVijayDiwas

The Indian Armed Forces defeated Pakistan on July 26, 1999. Since then, the day is celebrated as 'Kargil Vijay Diwas' to rekindle the pride and bravery of the soldiers who took part in Operation Vijay.

The day marks the victory of Indian soldiers in recapturing the mountain heights that were occupied by the Pakistani Army on July 26, 1999, known as the Kargil War.

Earlier on Sunday, Defence Minister Rajnath Singh said the abrogation of Article 370 has brought a new dawn of hope to the aspirations of the people of Jammu and Kashmir.

"India has become a strong and confident nation which is well-equipped to protect its people from anyone who tries to cast an evil eye," said Rajnath Singh during an event organised to commemorate 'Kargil Vijay Diwas' in Jammu on Sunday.

Highlighting the Centre's effort to build a self-reliant defence ecosystem, Singh said that a self-reliant India is well-equipped to give a befitting reply to anyone who casts an evil eye.