Kanpur Violence: According to police, search operations are underway and raids are also being conducted at all possible hideouts to arrest rioters at the earliest.

Kanpur | Jagran News Desk: The Uttar Pradesh Police on Monday released pictures of 40 people allegedly involved in the Kanpur violence that broke out in several parts of the city on June 3. According to police, these suspects played a key role in the violence that resulted in several people getting injuries.

The hoardings put up by Kanpur Police also have the contact numbers of the Station House Officers and senior police officials so that people can pass on information about suspects to the police, officials said.

Police officials have added that the identity of these 40 suspects will not be revealed. 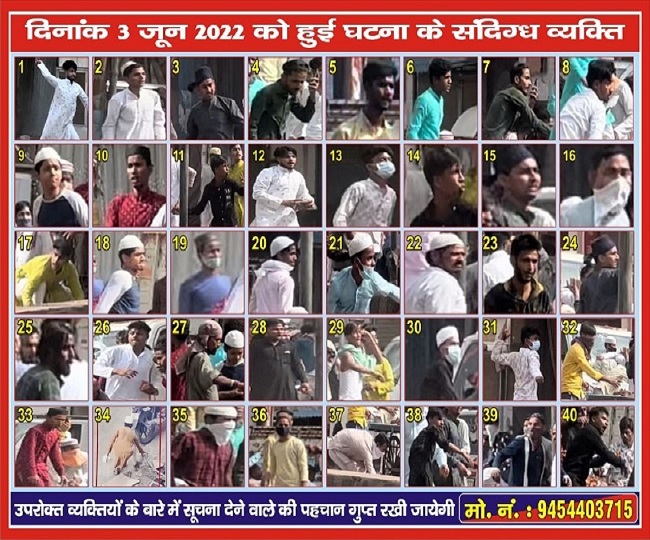 The latest development comes after police arrested nine more people in connection with the violence, taking the total number of those arrested to 38, officials added.

On June 3, the violence broke out in Pared, Nai Sadak and Yateemkhana areas of the city when some people tried to force shopkeepers to down shutters over allegedly insulting remarks made by BJP spokesperson Nupur Sharma against Prophet Mohammed during a TV debate, according to police.

"We have identified about 100 more stone-pelters and rioters through CCTV footage and video clips," said Anand Prakash Tiwari, Additional Commissioner of Police, Law and Order.

Deputy Commissioner of Police (East), Pramod Kumar, said "25 hoardings having photographs of about 40 key accused, who allegedly took part in the June 3 violence, will be put up at prominent places in and around the affected areas and neighbouring pockets."

"We have gathered images of the accused persons through video clips, cameras and CCTV footage," the DCP said.

The first special team, comprising four members and headed by Additional DCP (East) Rahul Mithas, has been formed to examine the CCTV footage, including government and private ones, and hand the footage to the SIT.

Another five-member special team headed by Assistant CP Swaroop Nagar and Brijnarain Singh has been asked to investigate a matter pertaining to a petrol pump giving away petrol in open bottles and containers.

The third special team headed by Assistant CP (Cantonment) will keep an eye on posts which are provocative and false on social media, including WhatsApp, Facebook, Instagram and others.

Hashmi is suspected to be the mastermind of the violence and was arrested from Hazratganj area of the state capital on Saturday, police said.