New Delhi | Jagran News Desk: Justice NV Ramana has been appointed as the next Chief Justice of India by President Ram Nath Kovind. He will take over the current CJI SA Bobde who is set to retire on April 23. Justice Ramana's name was recommended by CJI Bobde in a letter to the Union Law Ministry last month. 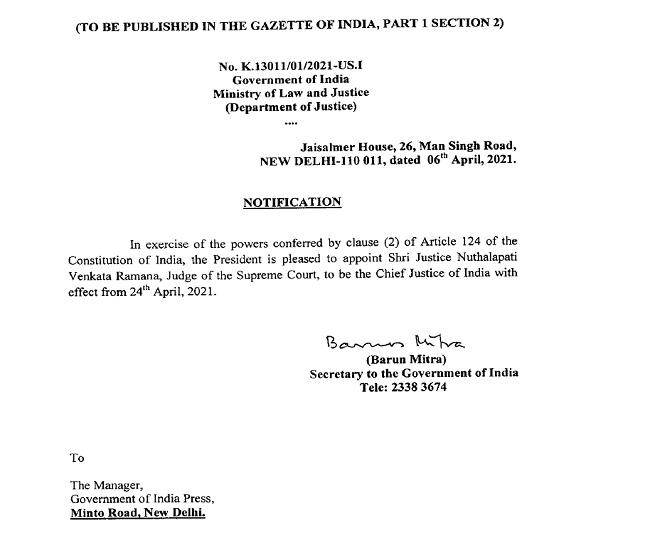 As per the Memorandum of Procedure governing the appointment of members of the higher judiciary, "appointment to the office of the Chief Justice of India should be of the senior-most judge of the Supreme Court considered fit to hold the office".

It stipulates that the Law Minister would, at an appropriate time, seek the recommendation of the outgoing Chief Justice of India for the appointment of the next CJI.

Under this process, after receipt of the recommendation of the CJI, the Law Minister puts it before the Prime Minister who advises the President in the matter of appointment.

Coming from an agricultural family in Andhra Pradesh, Justice Ramana was appointed as a permanent judge of the Andhra Pradesh High Court in June 2000. Before being elevated to the Supreme Court in February 2014, he also served as the Chief Justice of Delhi High Court.

Justice Bobde was sworn in as the 47th Chief Justice of India in November 2019, succeeding Justice (retired) Ranjan Gogoi. He has been part of several key cases, including the five-judge constitution bench that passed the historic verdict that cleared the way for the construction of a Ram Temple at the disputed site in Ayodhya.