Jodhpur Violence: The Rajasthan Police has said that the situation in Jodhpur is tense but under control, adding that three people have been detained in connection with the violence.

Jodhpur | Jagran News Desk: A curfew was imposed in 10 areas of Rajasthan's Jodhpur on Tuesday following the clashes between two communities ahead of Eid al-Fitr. In a statement, district officials urged people not to step out of their houses without permission, adding that the restrictions might be extended beyond May 4 if needed.

Earlier, the Jodhpur administration had suspended the internet and SMS services till further orders as a precautionary measure after clashes. 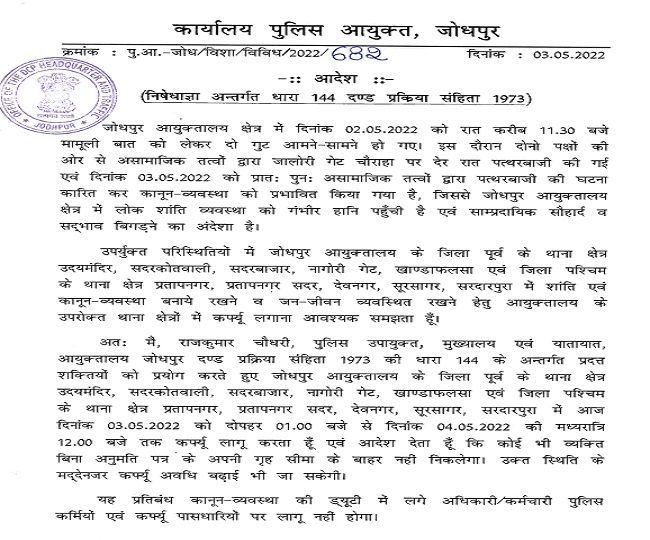 The Rajasthan Police has said that the situation in Jodhpur is tense but under control, adding that three people have been detained in connection with the violence. Security has also been beefed up in Jodhpur, but tension re-escalated after some people pelted stones at police vehicles after the Namaz of Eid on Tuesday.

"The situation is under control, flag march will be held. Action will be taken according to the law. Police personnel received minor injuries. We're looking into it (on flag hosting incident)," news agency ANI quoted Jodhpur Police Commissioner Navjyoti Gogoi as saying. 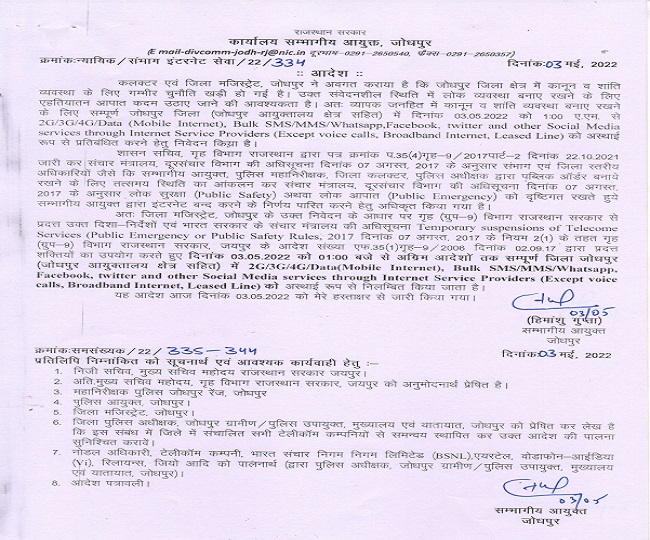 Chief Minister Ashok Gehlot, meanwhile, held a high-level meeting with the director general of police (DGP) and other state officials to review the situation in the state. Gehlot has also appealed to the people to maintain peace and harmony.

Jodhpur is the hometown of Gehlot.

"I want to appeal to people to maintain peace. This type of tension is not good for the people of Jodhpur. I've instructed police to deal strictly with anti-social elements. Everyone should understand that we've to maintain brotherhood," Gehlot told ANI.

The Bharatiya Janata Party (BJP), meanwhile, has slammed the Ashok Gehlot-led Congress government in Rajasthan for the deteriorating situation in the state. The saffron party has also objected to the installation of the Eid flag alongside the freedom fighter's statue.

It, however, has urged appealed to the people to maintain peace and demanded the state government establish a 'rule of law'.

"Due to appeasement politics peace, law and order situation disturbed in the state. It was clear from the Karauli incident that such incidents are done under government protection. Why does this type of incident happen only during Congress rule," Rajasthan BJP president Satish Poonia was quoted as saying by ANI.

PLT IN SECOND = 0.00347976
Jagran English brings you all the latest and breaking news from India and around the world. Get live English news from India, World, Politics, Entertainment, Lifestyle, Business, Education, Sports, Technology, and much more. Follow english.jagran.com to stay updated with the latest English news.
Copyright © 2022 Jagran Prakashan Limited.