COVID-19 Vaccination: India's vaccination drive against COVID-19 was launched on January 16 after the DCGI gave emergency use approval to Serum Institute's Covishield and Bharat Biotech's Covaxin.

New Delhi | Aalok Sensharma: In what could be termed as a major milestone for India in its battle against the deadly COVID-19 pandemic, the Union Health Ministry on Thursday announced that more than 100 crore COVID-19 vaccine doses have been administered in the country so far. With this, India has become only the second country in the world after China to administer over 100 crore vaccine jabs.

Lauding India's achievement, Prime Minister Narendra Modi expressed gratitude to doctors, nurses and all those healthcare workers who contributed to this feat. In a tweet, the Prime Minister said: "India scripts history. We are witnessing the triumph of Indian science, enterprise and collective spirit of 130 crore Indians. Congrats India on crossing 100 crore vaccinations. Gratitude to our doctors, nurses and all those who worked to achieve this feat."

We are witnessing the triumph of Indian science, enterprise and collective spirit of 130 crore Indians.

Congrats India on crossing 100 crore vaccinations. Gratitude to our doctors, nurses and all those who worked to achieve this feat. #VaccineCentury

How did India launch its vaccination drive?

From May 1, when India got hit by the second wave of the COVID-19 pandemic, the Centre expanded the vaccination drive allowed all above 18 years of age to get inoculated.

PM Modi's role in India's anti-COVID vaccination drive has been immense. Speaking to Jagran English, Dr Swadeep Srivastava, Founder and Chairman of HEAL Foundation and India Virtual Hospital, said that India's has been able to reach 100 crore-mark only "due to the close monitoring of the Prime Minister with the vaccination team".

"He has been the sheet anchor throughout the drive. Simultaneously, he has been appealing to the masses to get vaccinated and pushing the 'Vaccination Team' to accelerate the pace of the drive," Dr Srivastava said. 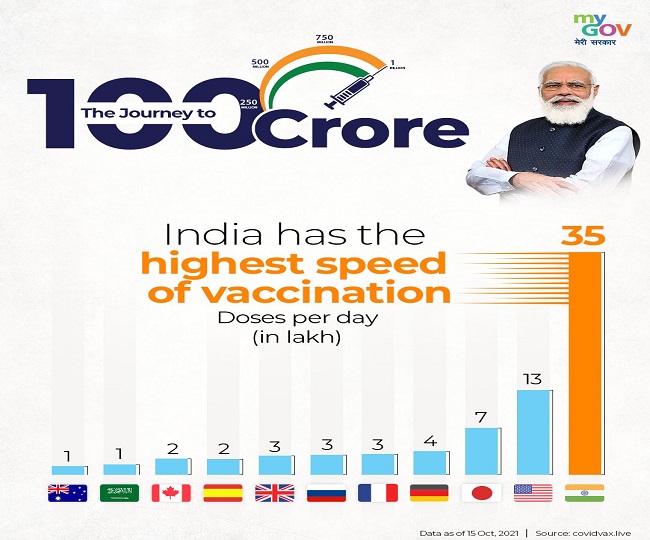 India's vaccination drive was expanded for people above 18 years of age from May 1. However, it created a controversy after several states and union territories (UTs) -- including Delhi, Maharashtra, West Bengal and Punjab -- stopped the vaccination drive at several inoculation centres due to an alleged shortage of doses.

With state and UT governments questioning PM Modi over the alleged shortage of doses, the Centre on June 7 announced that it will provide free coronavirus vaccine to states for inoculation of all above the age of 18 from June 21.

In a virtual address, PM Modi said that the Centre has decided to buy 75 per cent of jabs from vaccine makers, including 25 per cent of the state quota, and give it for free to state governments. He had also said that private sector hospitals can continue to procure 25 per cent of vaccines, but their service charge would be capped at Rs 150 per dose over the fixed price of the vaccine. 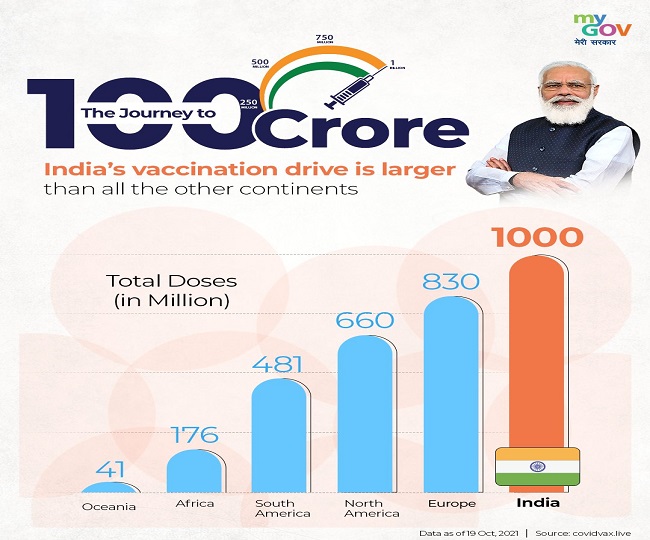 "Yesterday was a very emotional day for me. With the efforts of all of you, it became a very special day for me," said PM Modi a day after India administered over 2.5 crore vaccine doses.

Though India has administered more than 100 crore vaccine doses so far, medical experts suggest that the country now needs to focus on fully vaccinating its entire adult population by the end of this year. This means India needs to administer around 90 crore doses till December 31.

"Time will tell whether a booster dose is required in India or not. If experts' opinions are to be believed, less than 15 per cent of Indian adults have been vaccinated with two doses, and this means that all Indians who are more vulnerable to infection have not yet necessarily gotten two doses. Therefore, as of now, a booster dose is not required for India," Dr Srivastava told Jagran English.