The deadly virus has afflicted 4,10,461 people in the country so far, with over 14,000 new infections reported during the last 24 hours, creating a new record of highest single-day spike for the fourth straight day.

New Delhi | Jagran News Desk: The coronavirus cases in India has been on an exponential rise since the end of May. The country on Sunday crossed the grim milestone of 4 lakh cases in just seven days after crossing the 3 lakh mark.

The deadly virus has afflicted 4,10,461 people in the country so far, with over 14,000 new infections reported during the last 24 hours, creating a new record of highest single-day spike for the fourth straight day. The death toll in the country also crossed the 13,000-mark and reached 13,254 after 306 new fatalities were reported in the same period.

However, the recovery rate in the country has been improving rapidly and reached 55.48 per cent as 2,27,756 people recovered from the deadly pathogen till Sunday morning. 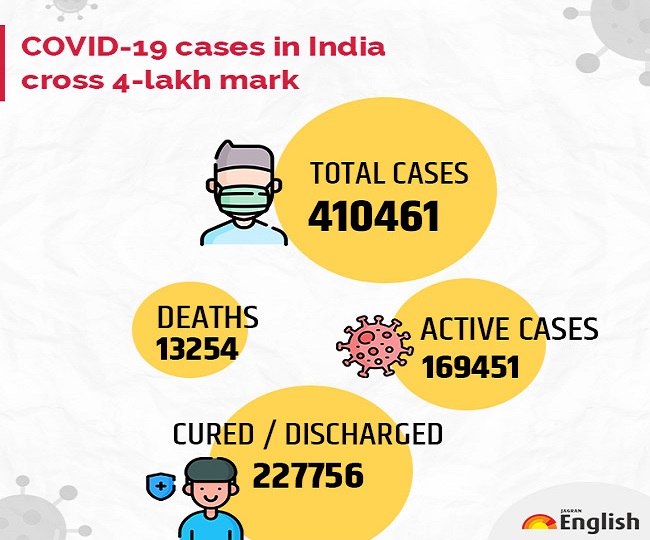 The first case of the highly contagious coronavirus was reported in Kerala on January 30, when a medical student who returned from China tested positive for the novel infection. The cases took 111 days to reach 1 lakh and just 15 days to cross two lakh mark. After 10 days the cases crossed the 3 lakh-mark and only seven days to cross the 4 lakh mark.

This comes at a time when the country is in the "Unlock 1.0", the first phase of the Centre's three-phase plan to ease out the restrictions in the country. 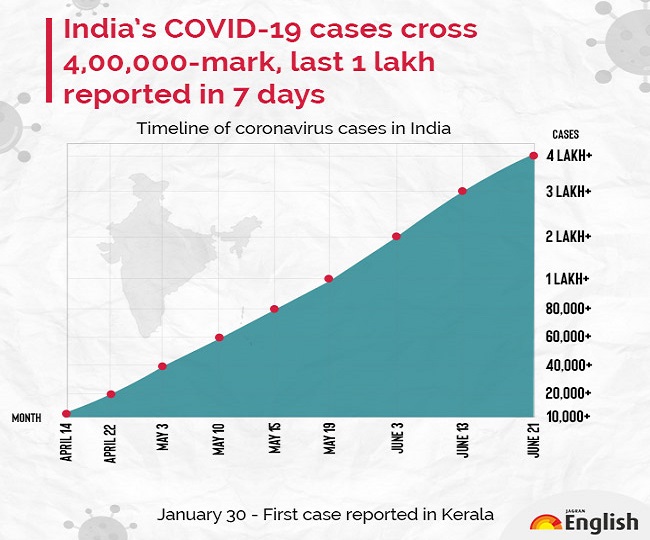 Here’s the timeline of coronavirus cases in India:

Also Read
Haryana girls to get passport along with their graduation degree: CM..

Among the Indian states, Maharashtra with 1,28,205 cases remains to be the worst-hit state. The death toll in Maharashtra also inches towards 6,000-mark and reached 5,984. Following Maharashtra, the southern state of Tamil Nadu is the second worst-hit state with 56,845 cases and 704 fatalities. Meanwhile, the national capital with 56,746 cases is on the third spot. The death toll in Delhi also reached 2,112 on Sunday. 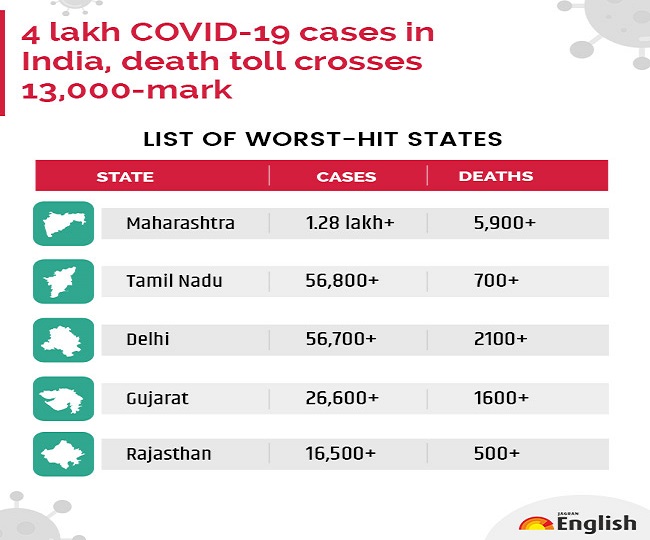 India is the fourth worst-hit nation by the COVID-pandemic 19 after the US, Brazil and Russia. While the US has reported more than 23 lakh confirmed cases so far, the tally for Brazil is over 10 lakh and for Russia more than 5.8 lakh.

Globally, more than 4.6 lakh have lost their lives and over 89 lakh have tested positive for COVID-19 since its emergence in China last December. However, over 47 lakh have recovered too.