This day is observed on October 8 every year as the Indian Air Force was established on this day under the British rule.

To celebrate the occasion, the Indian Air Force organises a grand parade on this day at the Hindon Air Base in Ghaziabad where its different aircraft -- the Su-30s, Rafales, MiGs -- take part.

This year, the Indian Air Force day is special because the Rafale fighter jets, which was formally inducted into the IAF last month, will also take part.

Here are the highlights from 88th Indian Air Force Day:

11:53 am: Chief of Defence Staff General Bipin Rawat with officers of Indian Air Force at the 88th Air Force Day parade at the Hindon air base 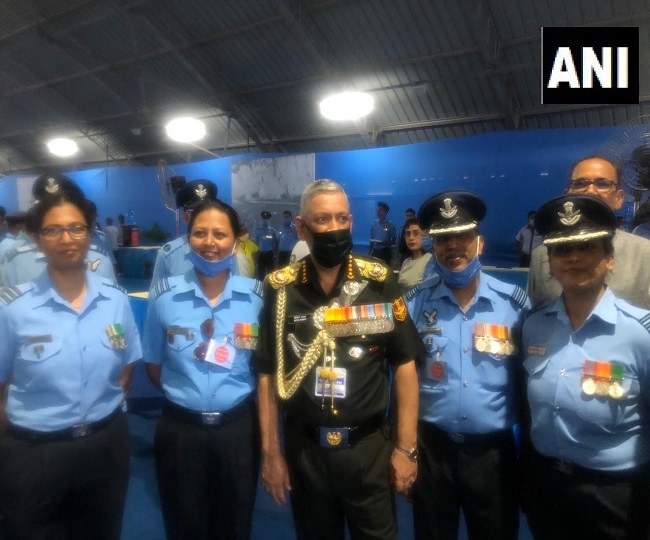 #WATCH: Flares fired by the Eklavya formation including Apache and Mi-35 attack helicopters at the Hindon Air Base in Ghaziabad.#AirForceDay2020 pic.twitter.com/ps70ymRp3X

10:00 am: I want to assure the nation that the Indian Air Force will evolve and be ever ready to safeguard our nation's sovereignty and interests in all circumstances, says IAF Chief Air Chief Marshal Rakesh Kumar Singh Bhadauria

I commend all air warriors for quick response in the recent standoff on the northern frontiers, when we deployed our combat assets at short notice to handle any eventuality and provided proactive support to all requirements of deployment and sustenance for Indian Army, he adds

9:53 am: As we enter the 89th year, the IAF is undergoing a transformational change. We are entering an era which will redefine where we employ aerospace power and conduct integrated multi-domain operations, says IAF Chief Air Chief Marshal Rakesh Kumar Singh Bhadauria

This year has indeed been an unprecedented one. As COVID-19 spread across the globe, our nation's response was firm. The tenacity and resolve of our air warriors ensured that IAF continued to retain its capability to undertake full-scale operations throughout this period, he adds

9:13 am: Defence cooperation is a cornerstone of the US-India relationship, as we work together to secure a free, open, and rules-based Indo-Pacific region: US Ambassador to India Ken Juster congratulates Indian Air Force on their 88th anniversary today

8:23 am: "Greetings on Indian Air Force day! From safeguarding our skies to assisting in all odds, our brave Air Force personnel have served the nation with utmost courage and determination. The Modi government is doing everything possible to keep our mighty air warriors roaring loud in the skies," says Amit Shah

8:11 am: You not only keep the skies of the country secure but also play a leading role in the service of humanity during disasters. Your courage, valour and dedication inspires everyone, says PM Modi

8:03 am: On Air Force Day, we proudly honour our air warriors, veterans, and families of Indian Air Force. The nation remains indebted to contribution of IAF in securing our skies and assisting civil authorities in Humanitarian Assistance and Disaster Relief, says President Ram Nath Kovind

7:45 am: I am confident that the IAF will always guard the nation's skies, come what may. Here's wishing you blue skies and happy landings always, says Defence Minister Rajnath Singh