India Coronavirus News: The Health Ministry also said that the Omicron tally in India has climbed to 1,700. Maharashtra continues to be the worst-hit state with 510 cases of the new variant

New Delhi | Jagran News Desk: At least 33,750 new COVID-19 cases were reported in India in the last 24 hours as the country's active caseload jumped to 1.45 lakh, said the Union Health Ministry on Monday. This is the biggest one-day spike in daily COVID-19 cases since September 17 last year when over 35,000 new infections were detected in the country.

In its daily updates, the Health Ministry also said that the Omicron tally in India has climbed to 1,700. Maharashtra continues to be the worst-hit state with 510 cases of the new variant, followed by Delhi which has 351 cases. Meanwhile, Kerala, Gujarat, Tamil Nadu, Rajasthan and Telangana have reported 156, 136, 121, 120 and 67 Omicron cases respectively till now.

Following is the state-wise report of the Omicron cases in India: 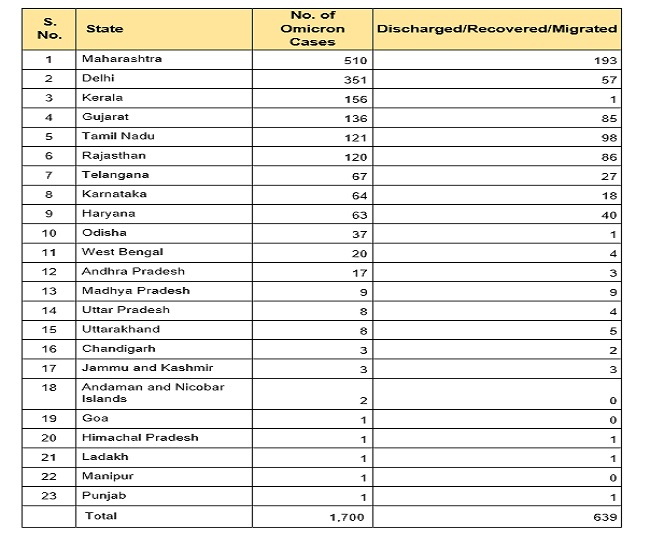 Meanwhile, India's death toll, the Health Ministry said, has also increased to 4.81 lakh after 123 fatalities were reported in the past 24 hours. The mortality rate, however, continues to be at 1.38 per cent, the lowest in the world.

More than 3.42 crore patients have also recovered from COVID-19, the ministry said, adding that India's recovery rate is at 98.20 per cent, the highest in the world.

The cumulative doses administered in the country so far under the nationwide COVID-19 vaccination drive has exceeded 145.68 crore, it noted.