India Coronavirus News: India's Omicron tally has also increased to 3,007, said the Union Health Ministry, adding that the new variant has been reported in 27 states and UTs so far.

New Delhi | Jagran News Desk: More than 1.17 lakh new COVID-19 cases - the biggest one-day spike in seven months - were reported in India on Thursday with a daily positivity rate of 7.74 per cent that pushed the country's active caseload to 3.71 lakh, said the Union Health Ministry.

The country on June 6 last year had reported over one lakh COVID-19 cases.

In its daily updates, the Health Ministry also said that 302 COVID-19 deaths were reported in India in the last 24 hours, pushing the country's toll to 4.83 lakh with a case mortality rate of 1.37 per cent, the lowest in the world.

India's Omicron tally has also increased to 3,007, said the Health Ministry, adding that the new variant has been reported in 27 states and union territories (UTs) so far. It also said that 1,199 Omicron patients have recovered from the infection. 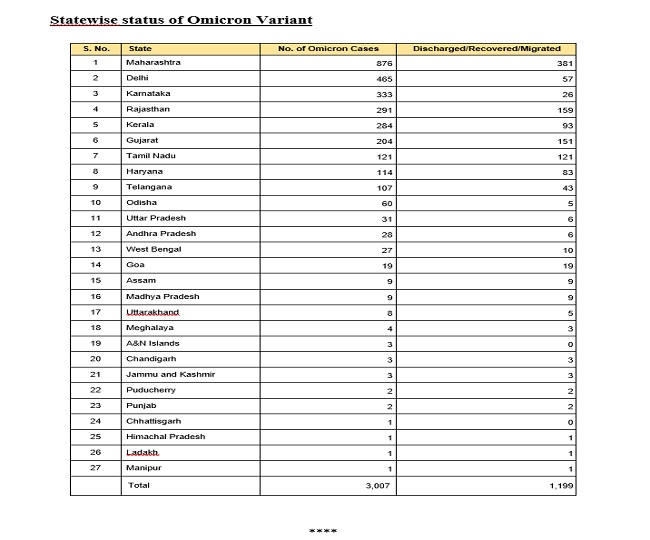 India might have reported its second suspected Omicron death after a 45-year-old woman in Odisha's Bolangir district - who was infected with the new strain - died on December 27 last year. Officials said that her genome sequencing report has revealed that she was infected with Omicron but it is yet to be ascertained whether she died due to the new variant.

"The woman tested positive for the Omicron strain on January 5, 2022 following genome sequencing of her swab sample. Persons who had come in contact with her have undergone the RT-PCR test," news agency PTI quoted Bolangir chief district medical officer (CDMO) Snehalata Sahoo as saying.

"It is yet to be ascertained whether she died due to heart attack or Omicron infection."

On Wednesday, India had reported its first Omicron death after the samples of a 73-year-old man in Rajasthan's Udaipur, who died last week, showed the presence of the new variant. He died due to post-Covid pneumonia coupled with comorbidities -- diabetes mellitus, hypertension and hypothyroidism, officials said.