Hathras Case LIVE: Meanwhile, a delegation of Congress MPs led by Rahul Gandhi will be visiting Hathras today to meet the family members of the victim.

New Delhi | Jagran News Desk: The Special Investigation Team (SIT) has completed its probe into the death of a 19-year-old Dalit woman after an alleged gangrape. The administration has also lifted restrictions on the media's entry into the village, a day after outsiders, including politicians, were barred from meeting the victim's family due to the ongoing SIT probe.

“Only the entry of media has been allowed into the village of the victim as the probe of the SIT has completed,” Joint Magistrate Prem Prakash Meena said. He also refuted allegations that the administration had confined the victim's family and confiscated their phones.

The UP government on Friday suspended Hathras SP Vikrant Vir and four other policemen amid outrage over the handling of the matter. A Special Investigation Team (SIT) has also submitted its report over the incident and found that the officials were responsible for the 'mismanagement' in the case. The state government has also said that the narco polygraph test of the SP and DSP will be conducted.

I can't comment on this. The decision was taken at the local (administration) level: DGP HC Awasthy on allegations that permission was not sought from the family members of the victim of #HathrasCase before performing her last rites pic.twitter.com/qlGR5wwgPP

They are en route to #Hathras in Uttar Pradesh to meet the family of the alleged gangrape victim. pic.twitter.com/yk3nQBP501

4:10 pm: We met the family of the victim and assured them that stringent action will be taken against the guilty. SIT is investigating the case. Statements of the family members being recorded: ACS Home Avnish Awasthi after meeting the family of the alleged gangrape victim in Hathras

4:00 pm: Delhi: Congress workers stopped at Delhi-Noida flyway. Congress leaders Rahul Gandhi and Priyanka Gandhi Vadra also present at the flyway with other leaders are en route to #Hathras in Uttar Pradesh to meet the family of the alleged gangrape victim. 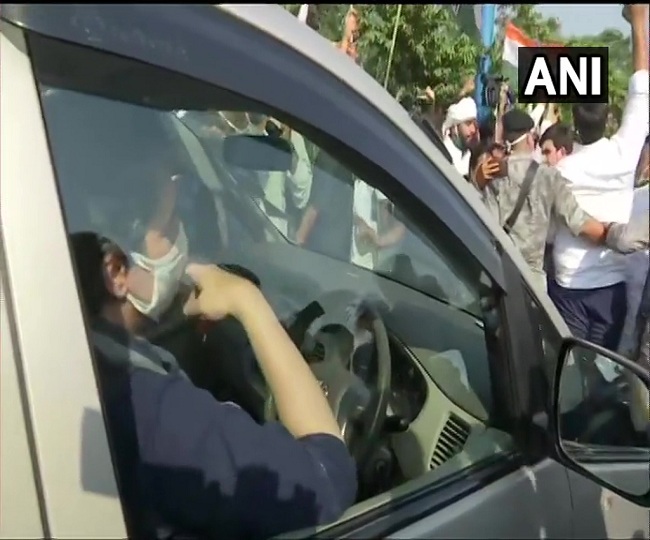 3:25 pm: They are violating the Section 144 of CrPC. We are deployed here to control the unlawful assembling of people. We are appealing for peace amid #COVID19 outbreak, in larger public interest they should disperse: Noida ADCP Ranvijay Singh

#WATCH Delhi: Congress leader Priyanka Gandhi Vadra on her way to meet the family of the alleged gangrape victim in #Hathras (UP), with Congress leader Rahul Gandhi (Source-Congress) pic.twitter.com/TSy7gLaxPL

2:50 pm: If not this time, then we will try again: Congress leader Priyanka Gandhi Vadra on her way to meet the family of the alleged gangrape victim in #Hathras (UP), with Congress leader Rahul Gandhi 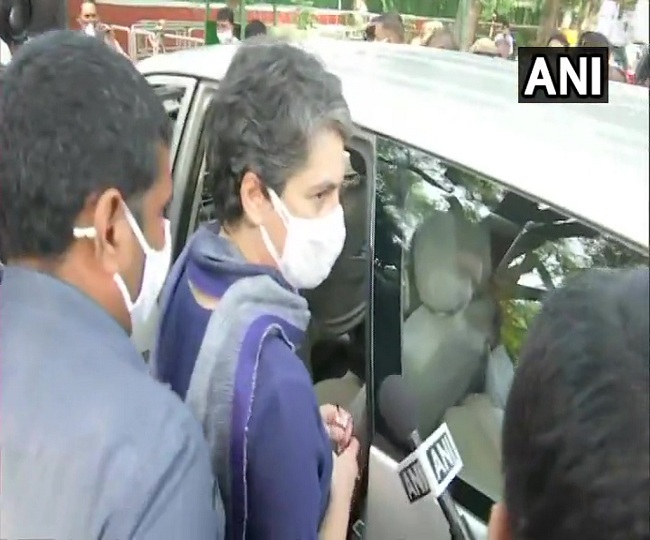 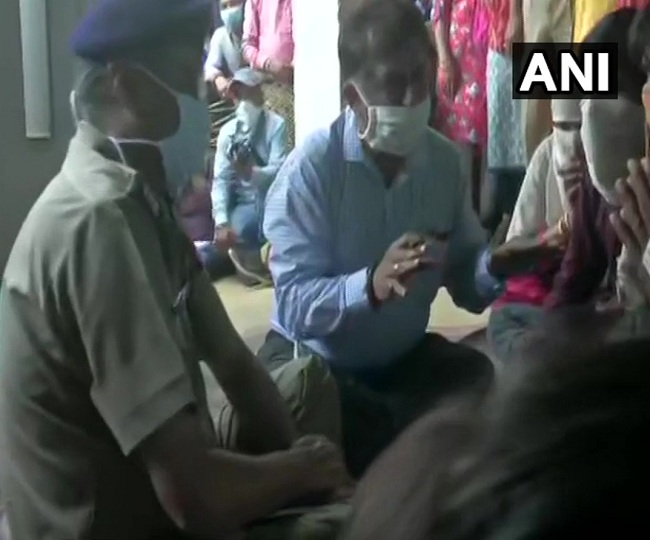 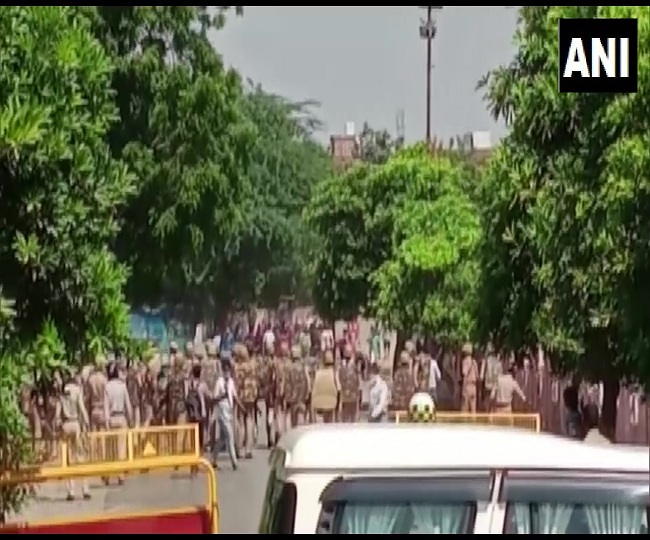 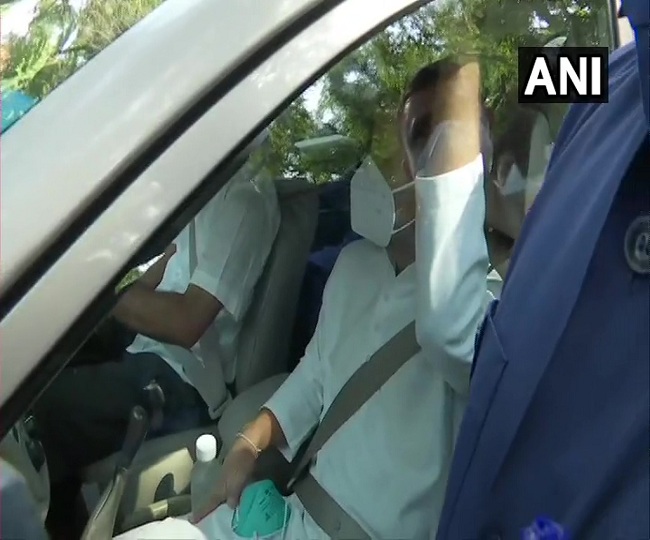 1:40 pm: Is there a system in UP? Since this govt came into power there have been many cases. Earlier, there were cases of lynching, killing of opposition leaders & filing cases against them. This is not new but routine in UP: Congress leader Ghulam Nabi Azad

1:15 pm: The #Hathras incident is a blot on humanity. The accused should be hanged to death & the family should be given justice. Mayawati is playing politics over the issue. She has no right to demand resignation of CM Yogi Adityanath: Union Minister Ramdas Athawale in Lucknow

1:00 pm: Noida: Security beefed up & barricades put up at the toll plaza on Delhi Noida Direct Flyway in view of the visit of a Congress delegation led by Rahul Gandhi to #Hathras. 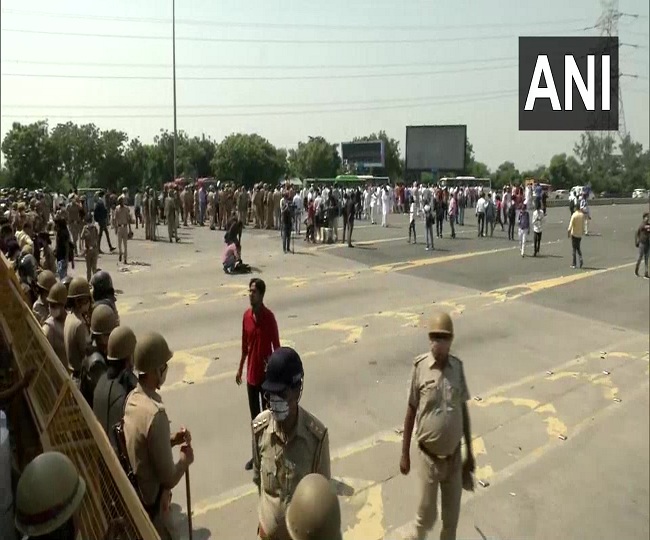 12:45 pm: People are aware Congress' tactics of that is why they ensured a historic win for BJP in 2019 polls. People understand that their visit to Hathras is for their politics & not for justice to the victim: Union Minister Smriti Irani on Rahul Gandhi's scheduled visit to UP's Hathras

12:30 pm: I don't know why the media were stopped. If the government has not done anything wrong then the media should be allowed to visit there (Bulgaddhi village, Hathras) to bring out the facts: Sanjay Raut, Shiv Sena on #Hathras alleged gangrape case

12:10 pm: A heinous crime took place in there (in Rajasthan), but you don't even talk about it. Your CM is trying to shamelessly defend it. You still want to go to Hathras, because you are feeling that you will play the 'Dalit' card. You need to be honest: UP Minister SN Singh

12:00 pm: Rahul Gandhi & Priyanka Gandhi Vadra do need to answer. They want to make another tourism trip to Hathras, that is their decision. As per the National Crime Bureau, the crime rate and conviction rate is very poor in their states and particulary in Rajasthan: UP Minister SN Singh

11:45 am: I have been placed under house-arrest. What is the state government trying to hide? Whom does it want to save? Today, women in Uttar Pradesh are unsafe. There is lawlessness in the state: UP Congress Chief Ajay Kumar Lallu in Lucknow

11:00 am: Noida: Visuals from the toll plaza at Delhi Noida Direct Flyway. Congress leader Rahul Gandhi & other party MPs are scheduled to visit Hathras today afternoon to meet the family of the victim of Hathras case 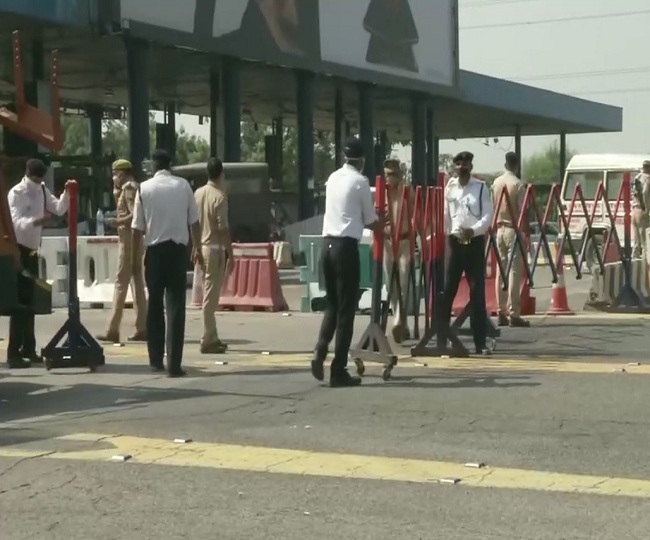 10:15 am: Only media is allowed right now. When orders come in to allow delegations, we will let everybody know. All allegations about phones of the family members being taken away or confining them in their homes are absolutely baseless: Hathras Sadar SDM Prem Prakash Meena

10:00 am: Hathras: Media allowed to enter the village of the victim of Hathras case. Sadar SDM Prem Prakash says, "Since SIT probe in the village is complete, the restriction on media has been lifted. More than 5 media persons are now allowed to gather as Section 144 of CrPC is in place."

9:00 am: Hathras: Police deployment at the entrance of Bulgaddhi village continues. Congress leader Rahul Gandhi along with his party MPs will visit Hathras to meet the family of alleged gangrape victim, later today