Hathras Case Updates: However, Hathras DM said that the administration has not received any information on the visit of the two leaders.

New Delhi | Jagran News Desk: Amid the massive outrage over the gang-rape and assault on a 19-year-old woman in Uttar Pradesh's Hathras, who succumbed to her injuries on Tuesday in Delhi, the Hathras administration on Thursday imposed Section 144 of the CrPC in the district prohibiting a gathering of over 5 persons. The borders of the district have also been sealed by the administration.

"Borders of Hathras are sealed. Section 144 of CrPC has been imposed in the district, more than 5 people are not allowed to gather", Hathras DM P Lakshkar said as reported by news agency ANI.

The development came after reports of Congress leaders Priyanka Gandhi Vadra and Rahul Gandhi visiting the Hathras district today surfaced in the media. However, Hathras DM said that the administration has not received any information on the visit of the two leaders. "We've no information about Priyanka Gandhi's visit. SIT will meet the victim's family members today, media will not be allowed", he said.

According to a report by IANS, Congress leaders Rahul Gandhi and Priyanka Gandhi Vadra will visit Hathras on Thursday to meet the family of the woman who died after being gang-raped, and whose cremation in the night by the police has provoked nationwide outrage. Party sources said the permission for the visit has been sought from the Uttar Pradesh government, and they will leave for Hathras today.

Here are the Latest Updates on the massive outrage against the Hathras rape incident:

Earlier pictures of Congress leader Rahul Gandhi being roughed up by Uttar Pradesh police at Yamuna Expressway, while he was on his way to Hathras 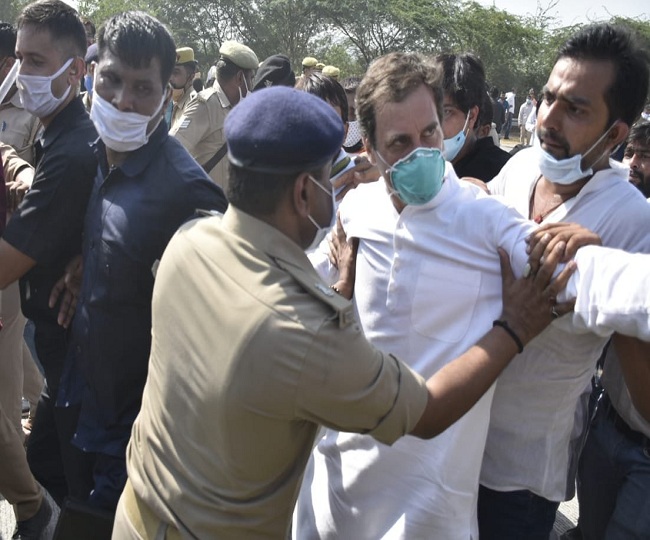 Rahul Gandhi, who has been stopped at Yamuna Expressway on his way to Hathras, asks police, "I want to walk to Hathras alone. Please tell me under which section are you arresting me." Police says, "We are arresting you under Section 188 IPC for violation of an order. "

#WATCH Rahul Gandhi, who has been stopped at Yamuna Expressway on his way to Hathras, asks police, "I want to walk to Hathras alone. Please tell me under which section are you arresting me."

Police says, "We are arresting you under Section 188 IPC for violation of an order. " pic.twitter.com/uJKwPxauv5

The FSL report has made it clear that the woman was not raped: UP Additional Director General of Police (Law and Order) Prashant Kumar on Hathras case

#WATCH Postmortem report says victim died due to her neck injury. FSL report hasn't found sperm in samples, making it clear that some ppl twisted the matter to stir caste-based tension. Such people will be identified & legal action will be taken: ADG Prshant Kumar on Hathras case pic.twitter.com/qMOUct7t92

We have stopped Rahul and Priyanka Gandhi here in Noida. The Epidemic Act is being violated. We will not allow them to proceed forward: Noida ADCP Ranvijay Singh.

Just now police pushed me, lathi-charged me and threw me to the ground. I want to ask, can only Modi Ji walk in this country? Can't a normal person walk? Our vehicle was stopped, so we started walking: Congress leader Rahul Gandhi at Expressway, on his way to Hathras.

#WATCH Just now police pushed me, lathicharged me and threw me to the ground. I want to ask, can only Modi Ji walk in this country? Can't a normal person walk? Our vehicle was stopped, so we started walking: Congress leader Rahul Gandhi at Yamuna Expressway,on his way to #Hathras pic.twitter.com/nhu2iJ78y8 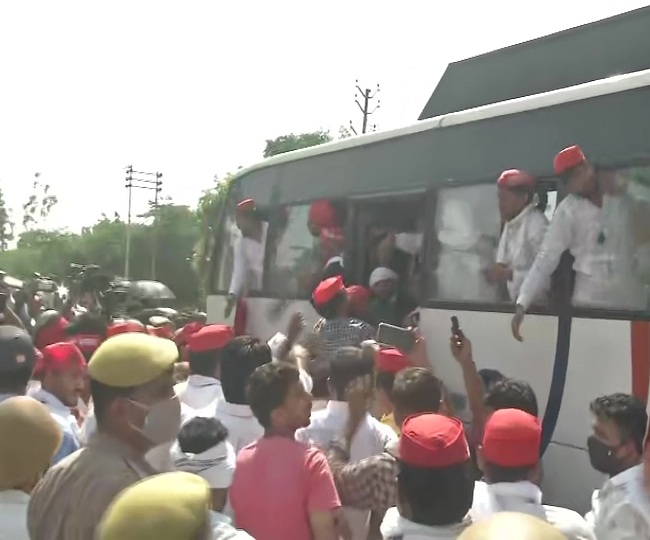 National Commission For Women (NCW) writes to DGP, Uttar Pradesh on Hathras alleged gangrape victim's body being cremated at midnight, seeking an explanation on the urgency to cremate the body of the victim in the absence of the family. NCW asks the administration to send their reply.

"Yogi Ji needs to take responsibility of the safety of women. The atrocities against women in UP have to stop. The accused need to be given the strictest of punishment. Same time last year we were fighting for the Unnao rape victim," Congress leader Priyanka Gandhi Vadra.

#WATCH "Yogi Ji needs to take the responsibility of safety of women. The atrocities against women in UP have to stop. The accussed need to be given the strictest of punishment. Same time last year we were fighting for the Unnao rape victim," Congress leader Priyanka Gandhi Vadra pic.twitter.com/oM550NgumI

Priyanka Gandhi Vadra along with Congress workers walks along the Yamuna Expressway, after her vehicle was stopped by the authorities. She is on her way to Harthras, to meet the family of the 19-year-old who was allegedly gang-raped. 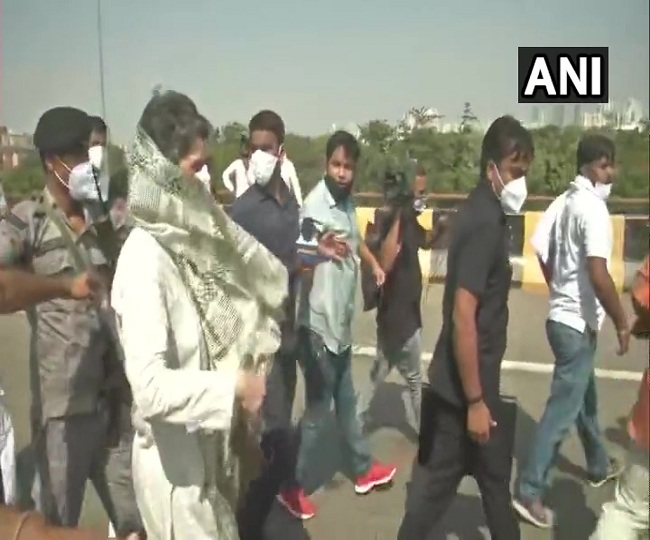 Congress workers greet & raise slogans in support of party leaders Rahul & Priyanka Gandhi who are on their way to Harthras where a 19-year-old woman was allegedly gang-raped, at the toll plaza on Delhi-Noida Direct Flyway. 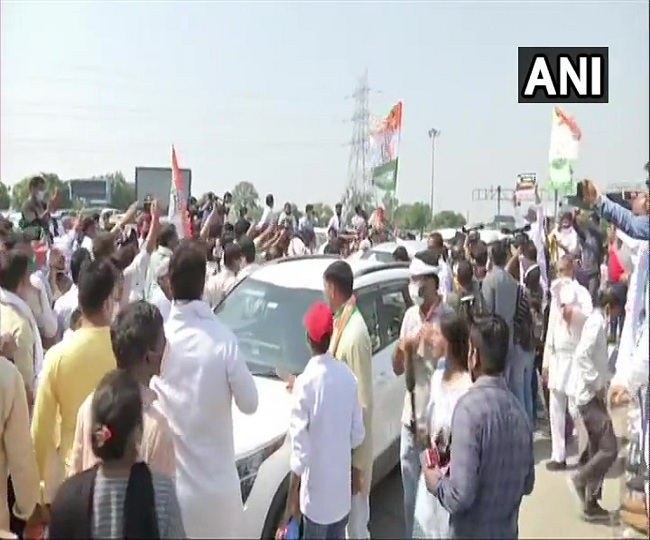 Congress leaders Rahul Gandhi and Priyanka Gandhi Vadra leave for Hathras in Uttar Pradesh where a 19-year-old woman was gang-raped. 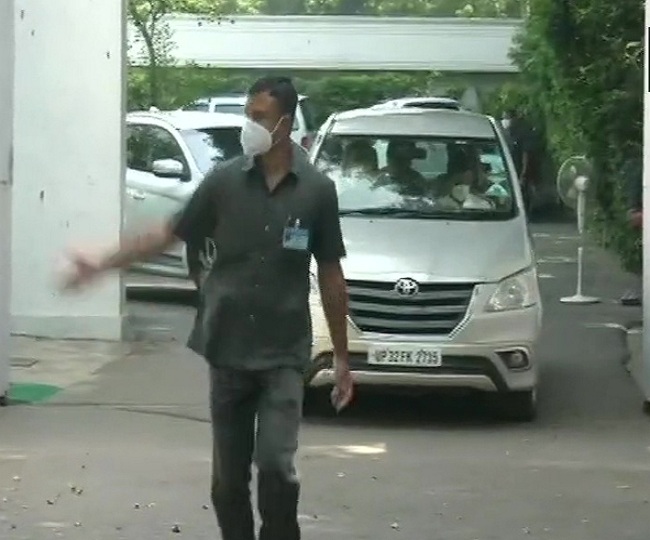 The autopsy report of the Hathras victim shows that the 19-year-old girl was strangulated by the culprits and suffered severe cervical spine injuries. The report has been released by the Delhi hospital where the 20-year-old died on Tuesday.

Earlier in the day, the Hathras Police said that the medical report of the victim mentioned injuries but did not confirm "forced sexual intercourse". Hathras SP Vikrant Vir, speaking to news agency ANI, said that the doctors have not confirmed rape and can only give a firm opinion based on the forensic report which is still awaited. He also said that the Special Investigation Team is in the city and also visited the crime scene and met the victim family on Wednesday.

Opposition corner UP government over the incident

Terming the Hathras gang-rape incident as "barbaric and shameful", West Bengal Chief Minister Mamata Banerjee on Thursday said the "forceful cremation" of the victim has exposed those who use lofty promise and slogans to seek votes.

"Have no words to condemn the barbaric & shameful incident at Hathras involving a young Dalit girl. My deepest condolences to the family. More shameful is the forceful cremation without the family's presence or consent, exposing those who use slogans & lofty promises for votes." Banerjee tweeted.

"After the Hathras incident, I hoped the Uttar Pradesh government will take action against people committing crimes against women. But a similar crime has been committed against a Dalit student in Balrampur. Under BJP's UP government, criminals, mafias and rapists are having a free run," Mayawati said as reported by ANI.

"The way Middle Class raised the "Nirbhaya rape" issue is missing this time. Is it because she is a Dalit or she is from a village? Or is it because the opposition parties of the day, lack the Organisational muscle of RSS/BJP to run such campaigns?" Singh said, adding that "a matter for all Opposition Parties to introspect. Would they? They should. Hathras Horror Shocks India".

Earlier yesterday Congress president Sonia Gandhi also attacked the Yogi Adityanath government over the death of Hathras gangrape victim, saying she "did not die but was murdered by the ruthless government" and "her body was consigned to flames forcibly".

"Crores of people in this country are sad and angry over the brutal incident of Hathras, which is a blot on our society. I want to ask, being a girl is a crime? Being a poor girl is a crime? What was UP government doing that they could not hear the voice of the family seeking justice? They tried to suppress the matter. Right medical facilities were not provided to the victim on time," Sonia Gandhi said in a video statement.

Samajwadi Party president and former chief minister Akhilesh Yadav also slammed the government and said, "Hathras victim's family severally beaten on the order of the government. Now the people will ensure the government is brought to justice. People are seeing the way BJP's misrule is revealing its true colours. The wicked will be unveiled soon," Yadav's tweet in Hindi reads.

UP Government's action on the incident

Amid the ongoing outrage, Chief Minister Yogi Adityanath on Wednesday said that a three-member panel has been set up to investigate the incident, directing the probe panel to submit the report in seven days. Adityanath also said that he had a conversation with Prime Minister Narendra Modi on the incident, and the latter said that strictest action be taken against the accused.

The woman's family will be given Rs 25 lakh and a house along with a government job for one member, the state government said. A senior government official also said the chief minister has also asked for conducting the trial of the case in a fast track court.

The National Human Rights Commission (NHRC) has taken suo motu cognizance of the Hathras incident of the rape and murder of a 19-year-old Dalit girl and has issued a notice to the Yogi Adityanath government. The Commission has directed the state government to provide adequate protection to the family of the deceased, keeping in view the gravity of the matter and also the aspect of the witness protection as there is an apparent rift between two communities. The government has been asked to respond to the notice within four weeks.

The woman was raped in a village in Hathras by four men on September 14. After her condition deteriorated, she was referred to Delhi's Safdarjung hospital where she breathed her last on Tuesday.

As news of her death spread, protests broke out in Delhi as well as in Hathras with all sections of society, including politicians, sports and cine stars and activists, expressing their anguish and demanding justice for her.