Srinagar | Jagran News Desk: Following the directions from Jammu and Kashmir Governor Satya Pal Malik, the administration will lift the restrictions imposed on tourists intending to visit the Valley today.

Malik, who reviewed the security situation in the Valley on Monday, directed the authorities to lift the security advisory for tourists with effect from today.

"The governor directed that the Home Department's advisory asking tourists to leave the Valley be lifted immediately. This will be done with effect from October 10," said an official spokesman on Monday.

Also Read | 'Not for other countries to comment on our internal affairs': India's retort to Jinping's remark on Kashmir

The government on August 2, three days before it ended the special status of Jammu and Kashmir, had issued a security advisory asking the tourists and pilgrims taking part in the annual Amarnath Yatra to leave the state as soon as possible. After that, the government imposed restrictions on movement and communication across the Valley.

Here are 10 things you need to know:

1. The National Conference (NC), however, called the administration’s move of lifting restrictions ‘half-hearted initiative’ and asked how would the tourists visit Kashmir when it remains under a ‘communication blockade’.

2. Meanwhile, the government has also announced that it will release three politicians detained since August 5. Yawar Mir, Noor Mohammed and Shoiab Lone will be released on various grounds which includes the signing of a bond, they said, explaining the reasons for ending their detention.

3. More than 1,000 people -- including former chief ministers of the state Farooq Abdullah, Omar Abdullah and Mehbooba Mufti -- were detained after the government ended the special status of Jammu and Kashmir.

4. However, the government on Saturday allowed a 15-member delegation of NC leaders to meet their party president Farooq Abdullah after two months. 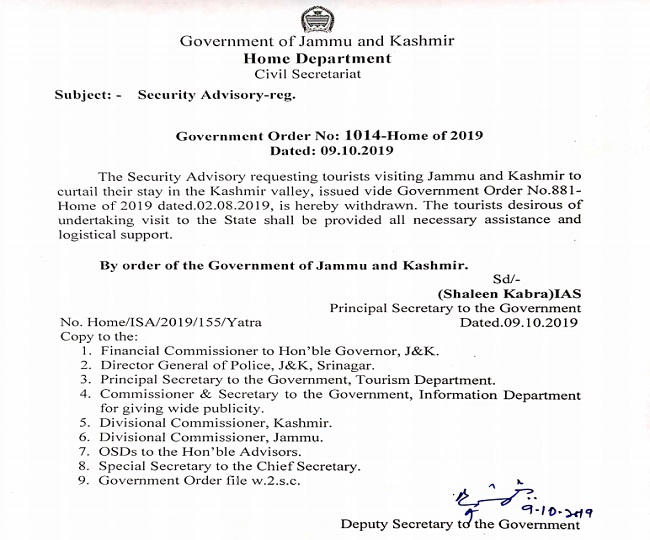 5. “We are happy that they are both well and in high spirits, of course, they are pained by the developments in the state. If the political process has to start then mainstream leaders have to be released,” NC leader Devender Rana was quoted by news agency ANI as saying.

6. Meanwhile, the Congress on Wednesday said that it won’t take part in the upcoming BDC elections -- which are expected to be held on October 24 -- in the state to protest against the detention of leaders post abrogation of Article 370.

7. State Congress chief Ghulam Ahmad Mir, who addressed a press conference on Wednesday, said that the Election Commission of India (ECI) should have consulted with political parties with several state leaders still under detention.

8. “We've come to realise that these elections (BDC elections) are being held to facilitate only one party - ruling party. Our leaders are under detention. We have no other option but to announce that we are boycotting the election,” he said on Wednesday.

9. The government’s effort to reopen colleges in the Valley on Wednesday also failed after most students did not attend classes. Divisional Commissioner (Kashmir) Baseer Khan had last week announced that schools would reopen on October 3 and colleges on October 9 in the valley.