Kanpur gangster Vikas Dubey had sought help from a BJP leader and demanded Rs 20 lakh after the Bikru ambush in which eight Uttar Pradesh policemen were killed.

New Delhi | Jagran News Desk: Kanpur gangster Vikas Dubey had sought help from a BJP leader and demanded Rs 20 lakh after the Bikru ambush in which eight Uttar Pradesh policemen were killed. A purported audio clip and WhatsApp chat of Vikas Dubey and BJP leader's conversation is going viral on social media. The dreaded gangster, who was killed in the encounter with the police, had also demanded a pair of shoes and blackcoat. 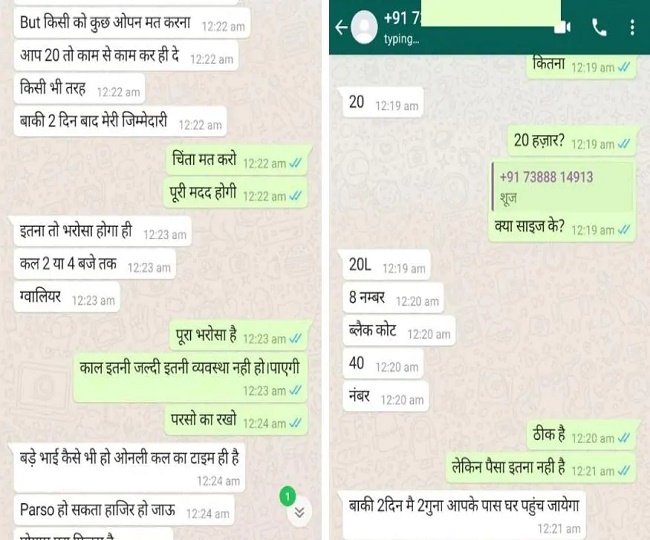 Dubey was killed in an encounter on the morning of July 10 when a police vehicle carrying him from Ujjain to Kanpur met with an accident and he tried to escape from the spot in the Bhauti area, the police had said. Prior to Dubey's encounter, five of his alleged associates were killed in separate encounters.

Earlier, another audio clip of the slain gangster threatening a police officer had also gone viral. In the purported audio clip, the slain gangster Vikas Dubey had allegedly threatened a Head Constable of Chaubeypur Police Station, asking him to make sure that a case is not registered against him.

In the purported audio which went viral on social media platforms, he is apparently threatening Rajeev Chaudhary, a Head Constable of Chaubeypur police station, that a case should not be registered against him.

As per the audio, Dubey is angry over a woman approaching the Chaubeypur police station to register a case against him on a land issue. He threatened Chaudhary of committing a big crime, even if he has to spend all his life in jail after that or remain absconding. Jagran English doesn't vouch for the authenticity of the viral audio and WhatsApp chat.