From Being Declared Extinct To A ‘Flight Back Home’; A Look At Journey Of Cheetahs In India

After the long-decade wait, India once again has Cheetahs in their national park as a special flight from Africa's Namibia landed in India carrying 8 Namibian Cheetahs. After 70 years of being declared extinct, these wild animals returned to India in Madhya Pradesh’s Kuno National Park. Under the 'Project Cheetah', PM Narendra Modi today (September 17), Which happens to be his birthday, released the eight Cheetahs into their designated sanctuary in Madhya Pradesh.

Around 8.5 million years back, these Cheetahs roamed freely across Asia and Africa in a large number. However, now these wild cats merely add up to about 7,000, which are mostly found in African savannas. For the unversed, these Cheetahs are the only exquisite animals that had been declared extinct from India since the country's independence.

Also Read
Rajasthan Crisis: Will Give Written Report By Tonight, Says Maken After..

Explaining how these animals went extinct, Indian forest service officer Parveen Kaswan took to the micro-blogging site Twitter and shared a video which is apparently from the year 1939, the video shows how these wild cats were hunted or domesticated for hunting parties in those times.

When #Cheetah are coming back to #India. A look at how the last of the lots were hunted, maimed and domesticated for hunting parties. Video made in 1939. 1/n pic.twitter.com/obUbuZoNv5

These wild cats were declared extinct in the year 1952, during the Jawahar Lal Nehru government. Cheetahs were used for coursing, sports hunting, overhunting, and habitat loss, due to which they slipped under the category of extinct animals.

According to the Indian forest service officer, these wild cats were in the least conflict with humans. However, they were used by hunting parties widely. Kings and Britishers played an important role in hunting Cheetahs. In the year 1947, the last three Cheetahs in India were hunted by Maharaja Ramanuj Pratap Singh Deo, King of Koriya (Chhattisgarh). The height of the wild cats was 6 feet 4-5 inches. All three Cheetahs were adults and were hunted during the night time.

Reproducing my 2019 tweet on cheetah and their extinction. https://t.co/vrbrjeC5ZR

In late 1972, the government of India passed the Wildlife Protection Act, in order to prevent most of Charismatic animals. However, by then, Cheetahs were already extinct in India.

Apart from videos, the IFS officer also shared pictures that showed these wild cats chained like dogs. Giving information on the paintings, Praveen said that they belonged to 1878 and are from Marriane North's book. 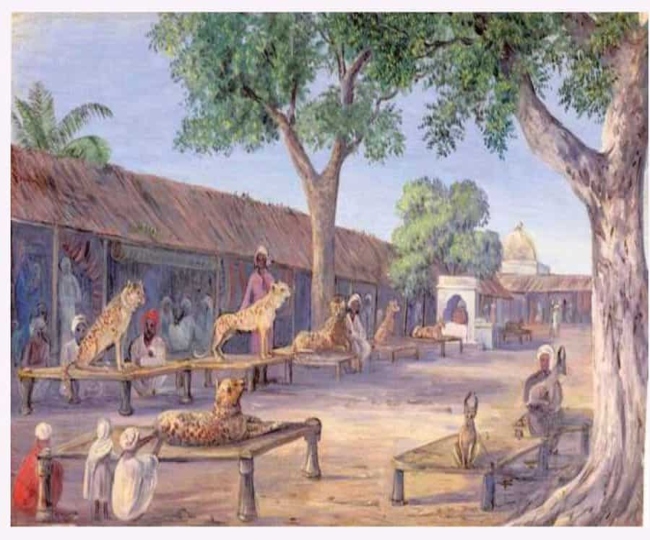 A total of eight Cheetahs were delivered to India, out of which five are female, and three are male. The wild animals were taken to Gwalior.