Farmers' Tractor Rally LIVE Updates: Internet services have been temporarily suspended in the areas of Singhu, Ghazipur, Tikri, Mukarba Chowk, Nangloi and their adjoining areas till 23:59 hours on January 26.

New Delhi | Jagran News Desk: One person was killed while several others were injured after violence broke out in parts of Delhi-NCR on Tuesday amid a clash between farmers and security officials. Following the clash, the Ministry of Home Affairs (MHA) suspended internet services in parts of NCR and held a high-level meeting to discuss the situation.

Meanwhile, the police have appealed the farmers to return to their pre-decided positions and maintain law and order. The police have also removed protesters from Red Fort premises where they had barged in after deviating from their planned route for the tractor parade and hoisted flags at the iconic monument in Delhi.

Here are the LIVE Updates from farmers' tractor rally:

18:25 pm: Additional companies of Paramilitary Forces are likely to be deployed in Delhi. These would be over and above 15 companies which were sent yesterday. 5 companies were on standby today: Govt sources

18:20 pm: Passengers who are not able to reach stations & catch trains in Delhi area stations due to Kisan agitation are requested to apply for full refund of all trains departing from all stations of Delhi area upto 2100 hrs today through TDR & e-TDR for e-tickets: CPRO, Northern Railway

18:15 pm: The time and the routes for the tractor rally were finalised after several rounds of meetings. But farmers drove tractors off the routes and before the fixed time, leading to vandalism in which many police personnel were injured: Delhi Police Commissioner SN Shrivastava to ANI

18:13 pm: Public properties have also been damaged. I appeal to the protesting farmers not to indulge in violence, maintain peace and return through the designated routes: Delhi Police Commissioner SN Shrivastava to ANI

17:57 pm: Nobody will support whatever happened today but the reason behind it cannot be ignored either. Those sitting calmly grew angry, the Centre didn't fulfill its responsibility. Govt should act maturely & take the right decision: NCP Chief Sharad Pawar on the tractor rally in Delhi

17:55 pm: Farmers from Punjab, Haryana, western Uttar Pradesh held protest in a disciplined manner but govt didn't take them seriously. As restraint ended, the tractor march was taken out. Centre's responsibility was to keep law & order in control but they failed: NCP Chief Sharad Pawar

17:19 pm: The Aam Aadmi Party has condemned today's violence and said that it is regrettable that the central government allowed the situation to deteriorate to such an extent.

"Farmer leaders have said that those who indulged in violence today were not part of the movement and were external elements. Whoever they were, the violence has certainly weakened the movement which was going on so peacefully and in a disciplined manner," it said in a statement.

16:31 pm: "The Red Fort is a symbol of the dignity of our democracy. The farmers should have stayed away from it. I condemn the violation of this dignity. It is sad and unfortunate," tweets Union Minister of Tourism and Culture Prahlad Patel.

Also Read
Cloudburst hits near Amarnath shrine in Jammu and Kashmir, no loss of life..

16:20 pm: Just In: The police has removed farmers from Red Fort premises.

15:59 pm: We thank farmers for the unprecedented participation in today's Farmers Republic Day Parade. We also condemn and regret the undesirable and unacceptable events that have taken place today and dissociate ourselves from those indulging in such acts, says Samyukta Kisan Morcha.

Despite all our efforts, some orgs and individuals violated route and indulged in condemnable acts. Anti-social elements had infiltrated the otherwise peaceful movement. We've always held that peace is our biggest strength and any violation would hurt the movement, it added.

15:58 pm: In the morning at Ghazipur border, two police officers - Additional DCP East Manjeet and a probationer IPS Officer — received injuries as they tried to stop the farmers from breaking the barricades: Delhi Police

15:13 pm: One of the protestors puts flags atop a dome at Red Fort. 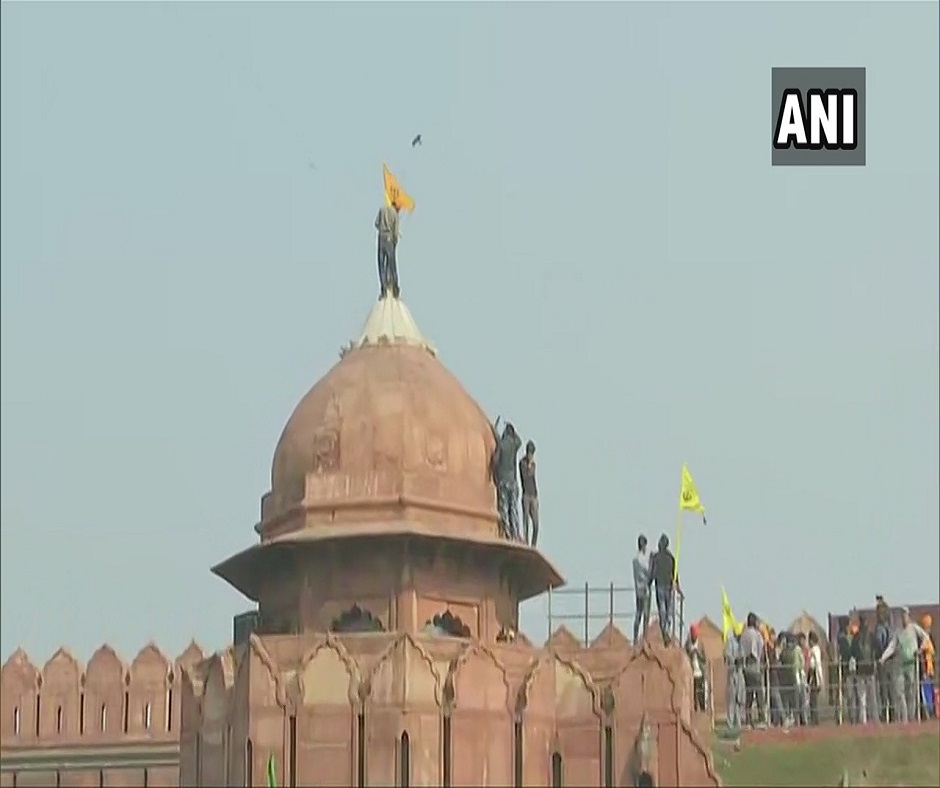 15:00 pm: "Since morning we had been appealing to farmers to go by pre-approved route but some of them broke police barricades, attacked police personnel. Appeal to farmer unions to help maintain peace. This isn't a peaceful protest on Republic Day," said Shalini Singh, Joint CP in Delhi's Nangloi, as reported by news agency ANI.

14:53 pm: Delhi Police appeals to protesting farmers to not take law in their hands, asks them to maintain peace and head back to their pre-decided routes for tractor parade

14:25 pm: Meanwhile, Congress leader Rahul Gandhi has tweeted that violence is not the solution, appealing people to calm down.

"Violence is not the solution to any problem. If anyone gets hurt, the damage will happen to our country," he said.

14:15 pm: Protesters enter Delhi's Red Fort and wave their flags from the ramparts. 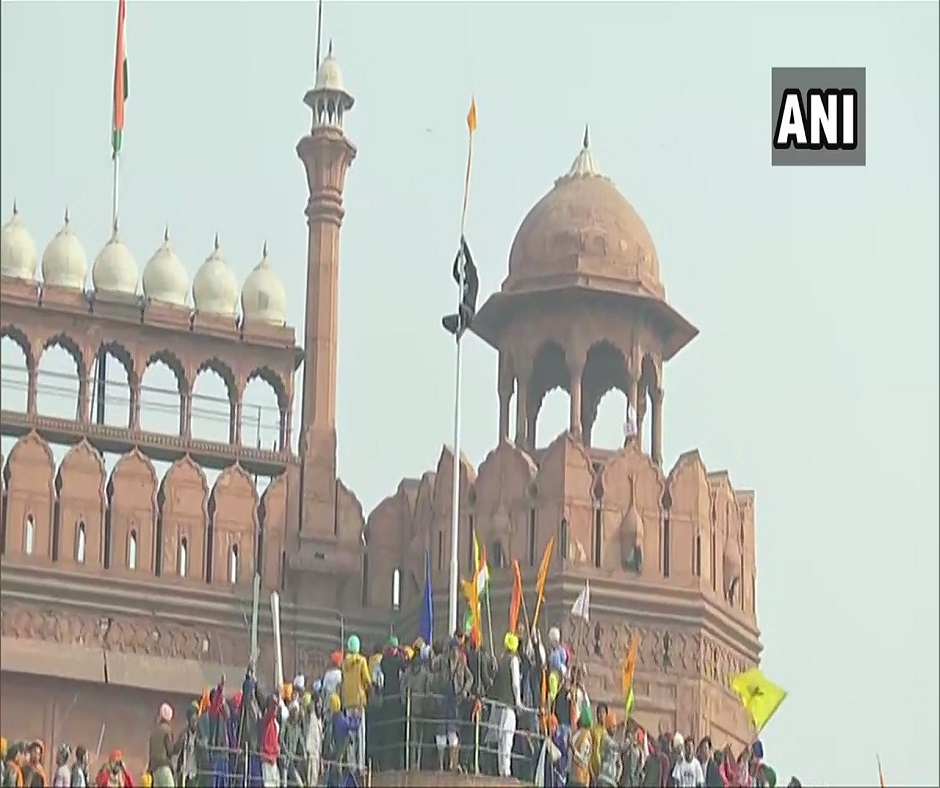 13:53 pm: A Delhi Police personnel was looked after by other Police personnel as he fell unconscious while on duty at Dilshad Garden, during the farmers' protest. He is now being taken to a hospital after regaining consciousness. 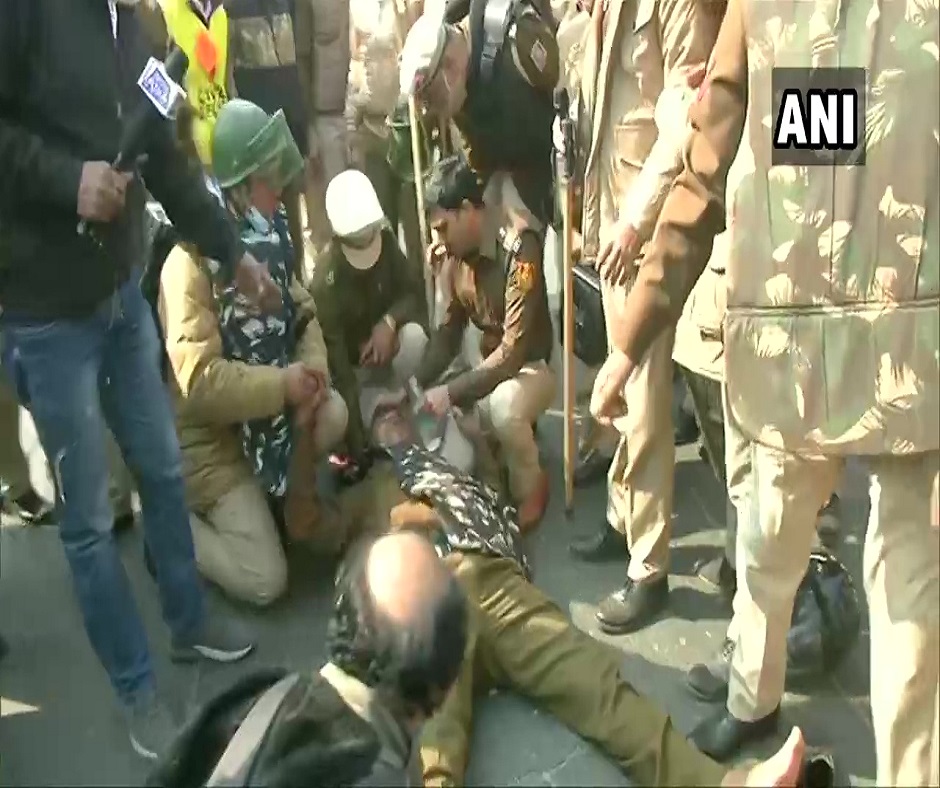 13:38 pm: Several police officials have also been injured in the clash. 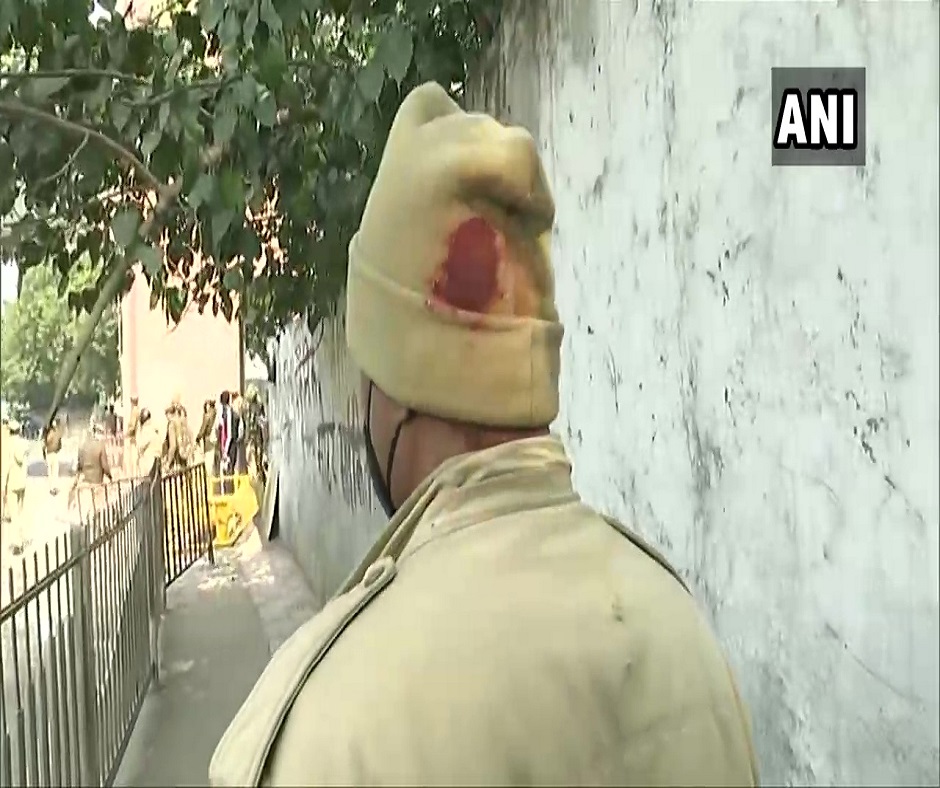 13:37 pm: Injuries during the clash between protesting farmers and Police. Visuals from ITO area in central Delhi. 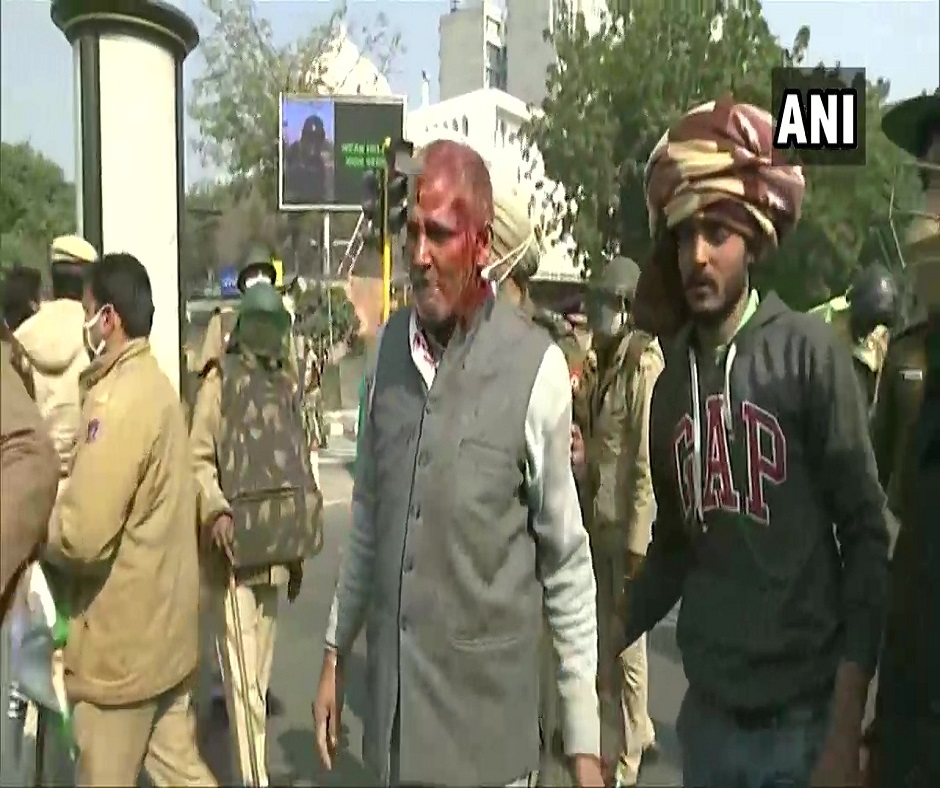 13:01 pm: Police use tear gas shells to disperse the protesting farmers at ITO in central Delhi. 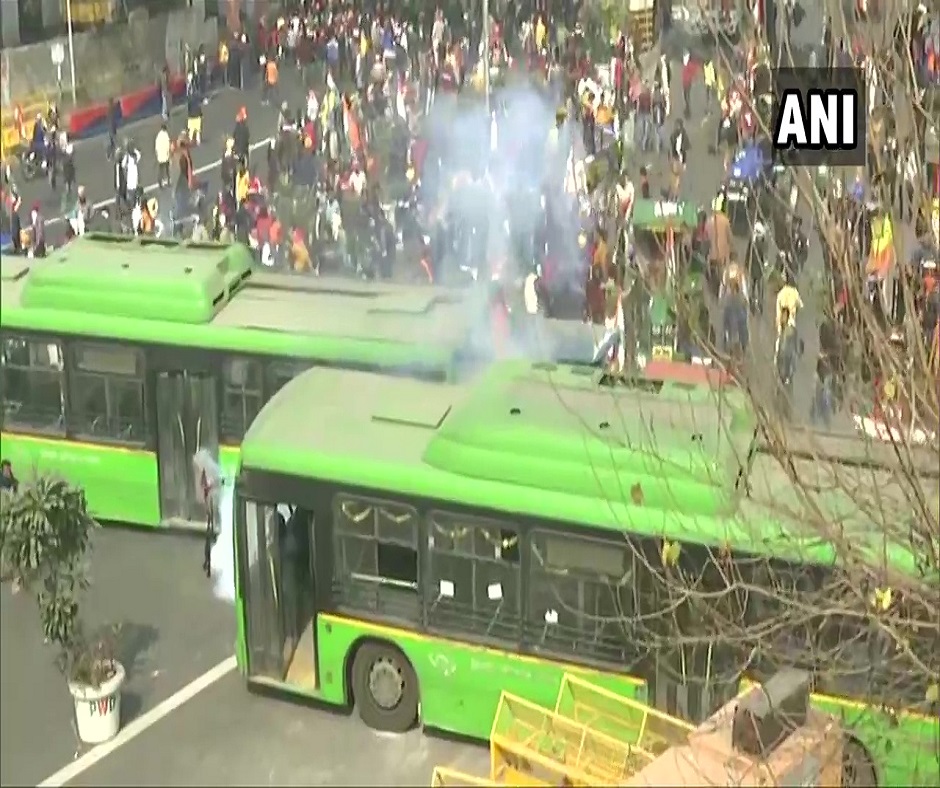 12:55 pm: Rally is going on peacefully. I don't have any knowledge of it. We are at Ghazipur and are releasing the traffic here, says Rakesh Tikait, Spokesperson, Bharatiya Kisan Union (BKU). 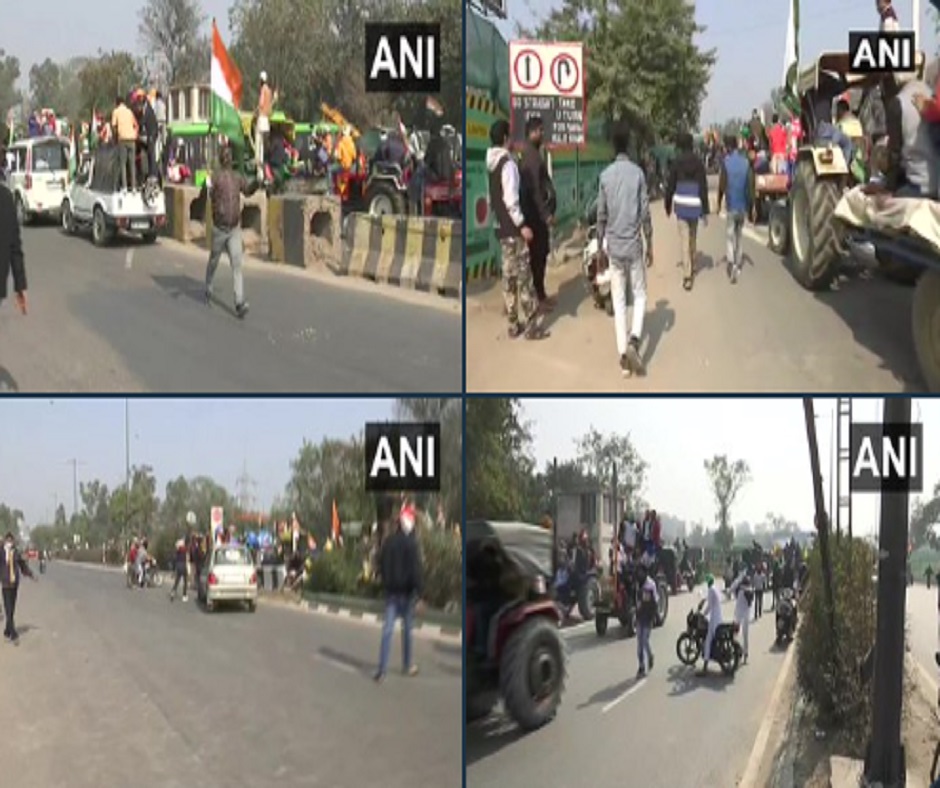 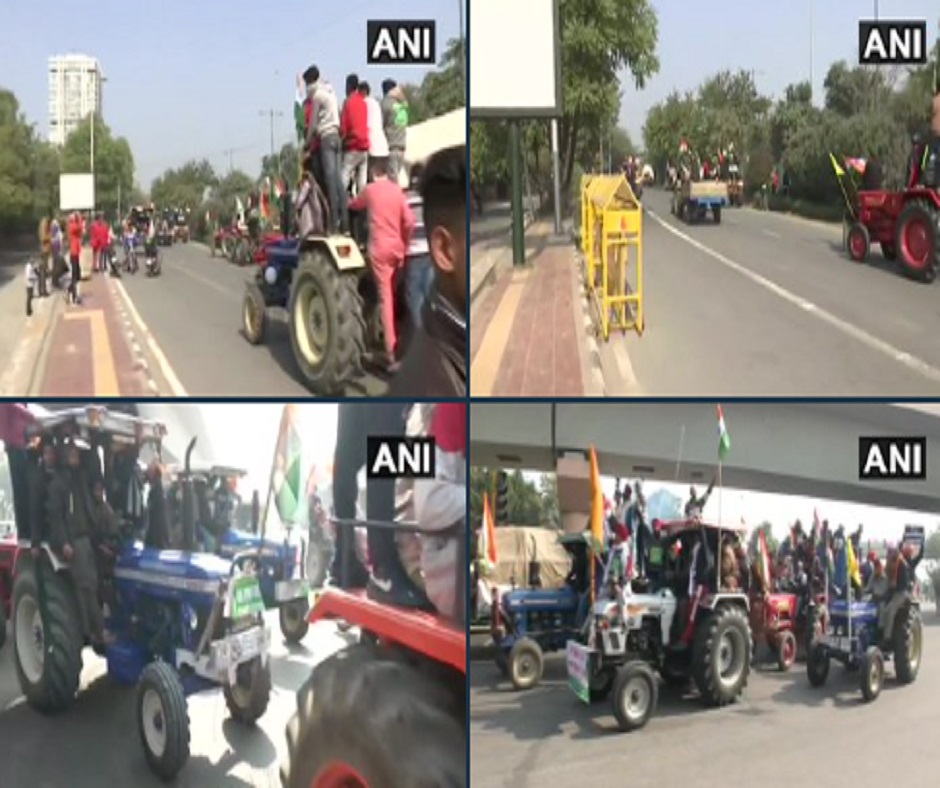 11:54 am: "It is our request that they continue to follow the route they are currently on," says SS Yadav, Joint Commissioner of Police at Singhu Border.

11:32 am: Police used tear gas shells after isolated incidents of scuffle between protestors and police took place at Sanjay Gandhi Transport Nagar and protestors took over a police vehicle.

#WATCH Police use tear gas on farmers who have arrived at Delhi's Sanjay Gandhi Transport Nagar from Singhu border#Delhi pic.twitter.com/fPriKAGvf9

11:07 am: We've to move towards Ring Road but police is stopping us. We've given them 45 mins to speak to their seniors. We're carrying out a peaceful parade. The route they are asking us to follow wasn't agreed upon, says Satnam Singh Pannu, Kisan Mazdoor Sangharsh Committee at Singhu Border.

10:46 am: Haryana: Drones put to use amid high security arrangements at Faridabad-Palwal border as farmers carry out tractor parade. 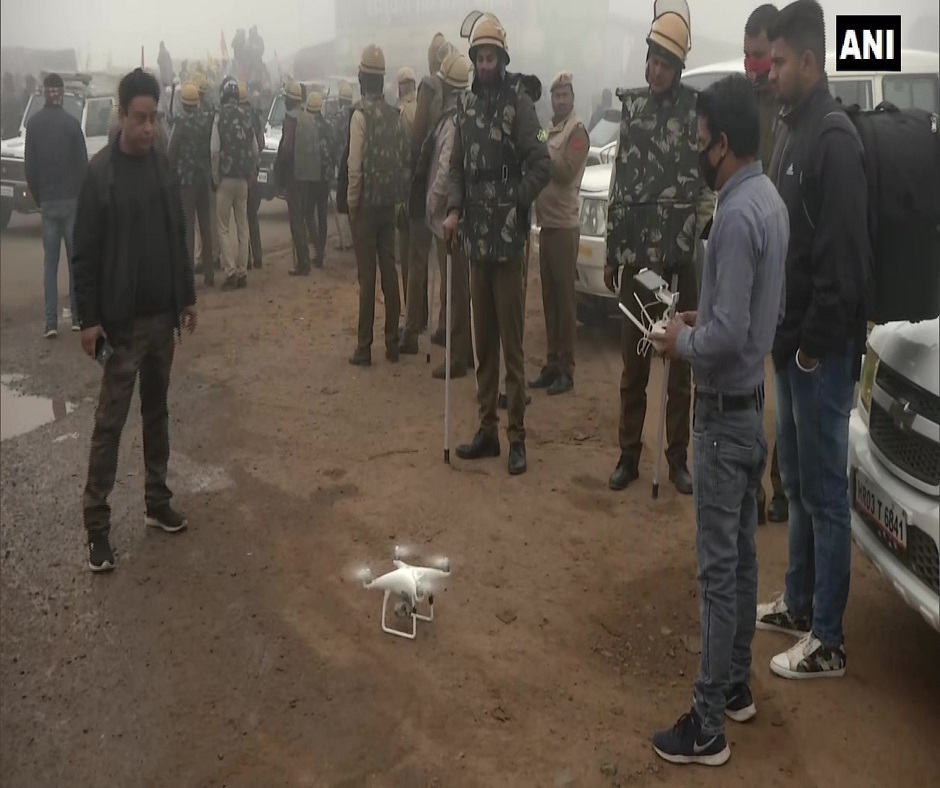 10:45 am: Locals in Swaroop Nagar shower flower petals on farmers as they carry out tractor parade. 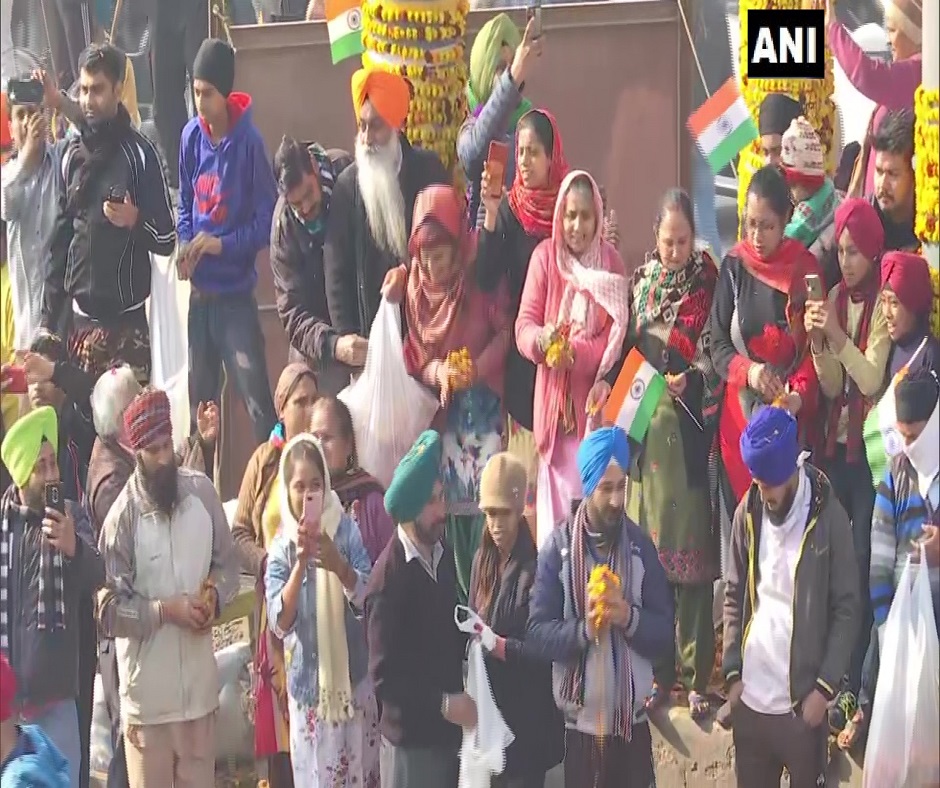 10:20 am: Meanwhile, Union Agriculture Minister Narendra Singh Tomar on Monday said that the agitation against the farm laws which has been going on for almost two months, will end soon.

While talking to ANI, Tomar said that the government which has so far held eleven rounds of talks with the farmers to break the impasse is still hopeful of a solution. He said that farmers could have chosen a different day for the tractor parade instead of holding it on Republic Day. 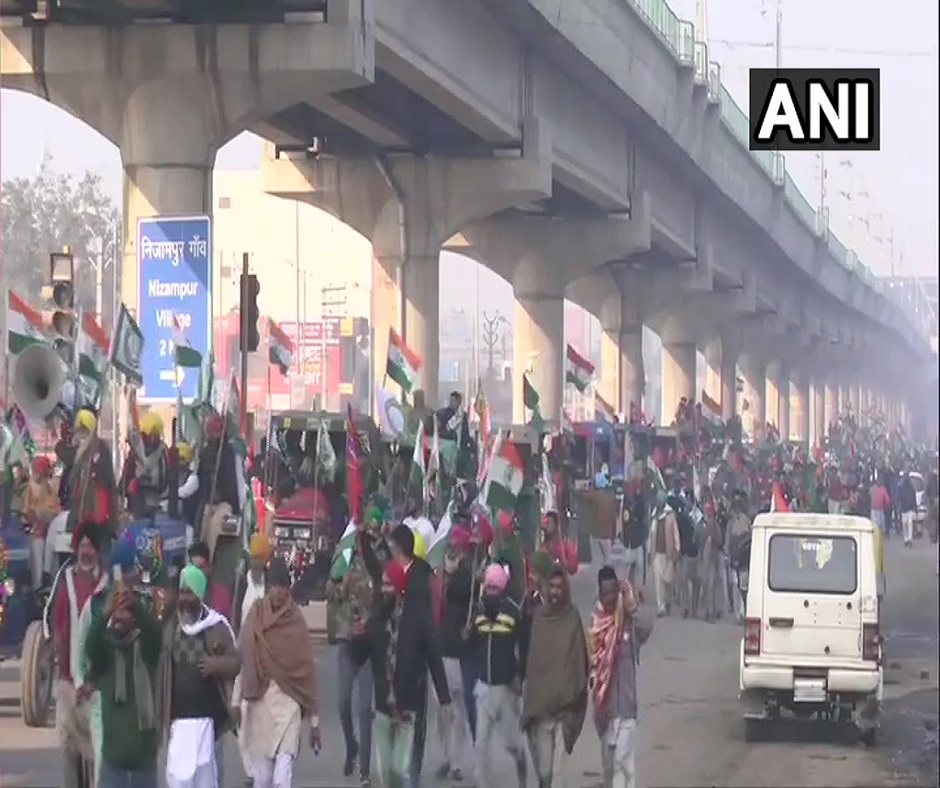 9:14 am: We are in touch with the Uttar Pradesh Police and farmer leaders. We have deployed drones for security surveillance during farmers tractor rally, says DCP East Delhi at Ghazipur border.

8:45 am: Recap: Only 5,000 people on as many tractors will be allowed to participate in the parade in Delhi, and it shall be held within the prescribed time slot of 12 pm to 5 pm on Tuesday, the NOC read.

8:45 am: Recap: The Delhi Police has given a No-Objection Certificate (NOC) to the protesting farmer unions for their proposed Republic Day tractor parade with 37 conditions, including capping the number of participants and allocating a fixed time slot.

According to the NOC, the parade has to be restricted to the permitted routes only, and no dharna, demonstration or sit-in protest should be held on the parade route.

8:43 am: A large number of farmers, along with their tractors, head towards Delhi.

#FarmersTractorRally | A large number of farmers, along with their tractors, head towards Delhi, as part of their tractor rally on #RepublicDay today.

8:33 am: Meanwhile, farmers leaders have appealed the protesters to ensure that the tractor rally remains peaceful.

"No one should carry any weapon or consume alcohol. Banners carrying inciting messages are not allowed," a leader said.

8:09 am: Also Read -- After tractor rally on Republic Day, protesting farmers to march towards Parliament on Union Budget day

8:07 am: Farmers head towards Delhi for their tractor rally.

#WATCH: A large number of farmers, along with their tractors, head towards Delhi, as part of their tractor rally on #RepublicDay today.

8:06 am: Farmers prepare for their tractor rally. Visuals from Delhi-UP Ghazipur border. 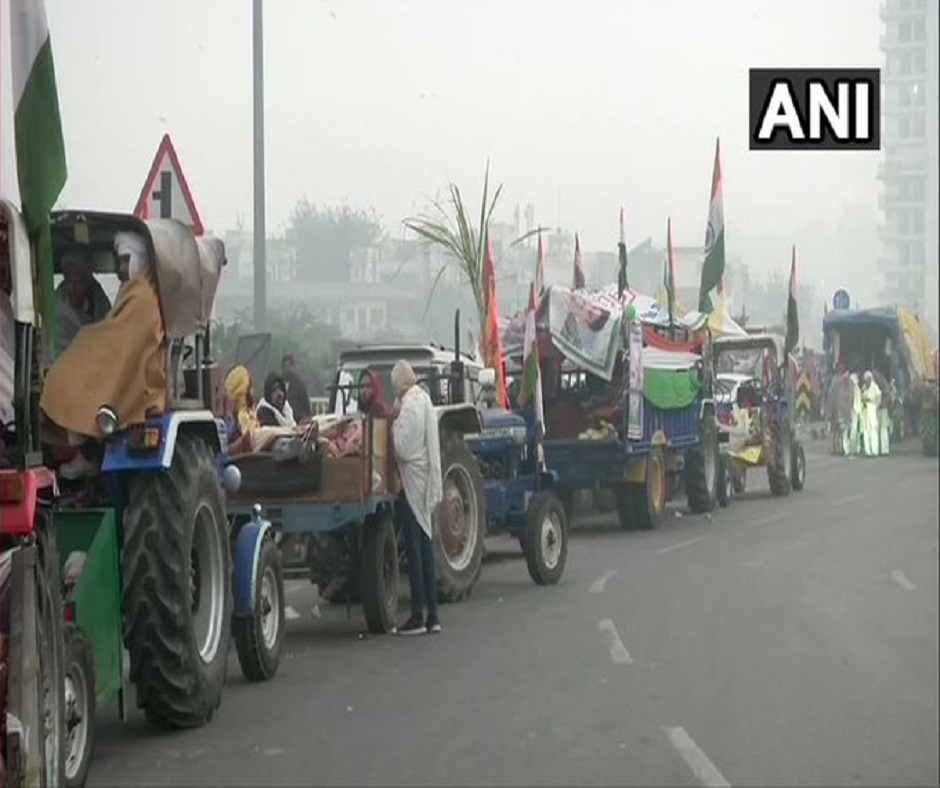 7:48 am: "From Tikri border, it will go to Nangloi and pass through Najafgarh and Western Peripheral Expressway. From Ghazipur border, the rally will go to 56-foot road and return to its originating point passing through Kundli-Ghaziabad-Palwal Expressway," he added.

7:47 am: The police has said that the rally will begin once the Republic Day parade officially ends, adding that farmers will not be allowed to enter the city-state.

"The tractor rally will enter Delhi from Tikri, Singhu, and Ghazipur borders and return to its originating points. From Singhu, it will pass through Kanjhawala, Bawana, Auchandi border, KMP Expressway and then return to Singhu," said Special Commissioner of Police (CP), Intelligence in Delhi Police Dependra Pathak.

7:46 am: Ahead of the farmers' rally, security has been tightened in Delhi with police barricading several important places in the city including ITO, Yamuna Bridge and other locations.

7:45 am: Protesting farmers will hold a tractor rally today as a part of their agitation against the three contentious farm laws that were passed in the Parliament last year.