Bharat Bandh LIVE: The Delhi Police have also tightened the security at the border areas in the wake of the Bandh.

New Delhi | Jagran News Desk: Intensifying their protests against the contentious agricultural bills passed by the Parliament, various farmers' organisations, including from Punjab, Haryana and Uttar Pradesh, have called a national shutdown today. The farmers' groups said they will be holding a "chakka jam" from 10 am to 4 pm.

A heavy police force has been deployed in Punjab and Haryana to deal with any untoward situation. A high alert has also been sounded in western Uttar Pradesh for today’s 'Bharat Bandh'. The Delhi Police have also tightened the security at the border areas in the wake of the Bandh.

Barricades have been put in areas bordering Uttar Pradesh and Haryana, and the vehicles entering Delhi are being checked. The Delhi Police and paramilitary forces have been deployed at the Singhu border and Karnal road (Haryana) as a precautionary measure.

Keeping in view the farmers' agitation in Punjab against agriculture bills, some trains operated by Northern Railway will remain cancelled or partially cancelled, as per Deepak Kumar, Chief Public Relation Officers (CPRO) of the zone.

Here are the LIVE Updates from Farmers’ ‘Bharat Bandh’:

4:00 pm: Farmers have opposed the Bills as they feel the Bills will not benefit them. NCP has also opposed it. What was the hurry to pass them? We are trying that these Bills aren't implemented in the State. We've held a meeting on it: Maharashtra Dy CM & NCP's Ajit Pawar on farm Bills

3:30 pm: Opposition parties stage protest against the new agriculture reform bills in Gaya, today "We're protesting anti-farmer laws which must be repealed by the Central Govt. It'll only benefit corporations & will lead to the closure of all mandis," says an RJD district worker

3:00 pm: We oppose #FarmBills passed by the Parliament. Maharashtra Vikas Aghadi is also against it. We will decide not to implement it in the State: Maharashtra Congress President and State Minister Balasaheb Thorat 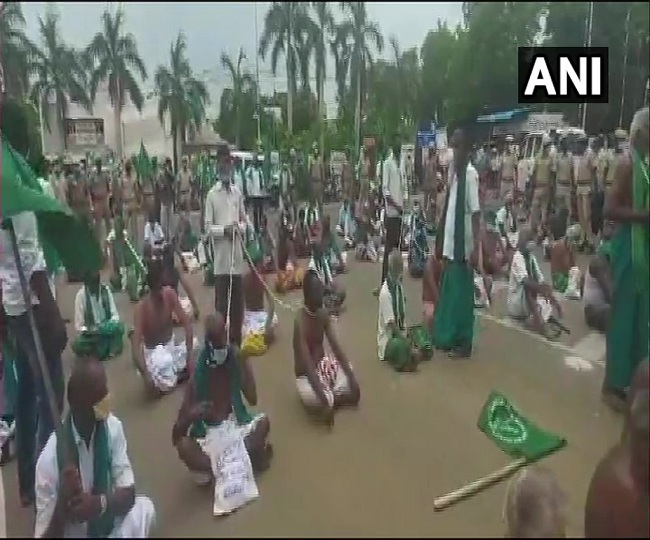 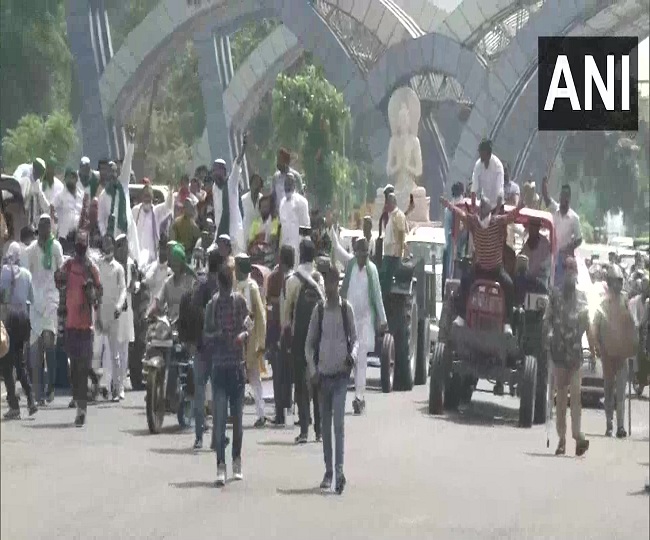 12:00 pm: All BJP Karyakartas should reach out to farmers on the ground & inform them in a very simplified language about the importance & intricacies of the new farm reforms, how these will empower them. Our ground connect will bust the lies & rumours being spread in virtual world: PM

11:50 am: In last few years, NDA govt made full efforts to connect farmers with banks. Over Rs 1 lakh crores transferred to over 10 crore farmers under PM Kisan Samman Nidhi Yojana. Our effort was to provide KISAN credit cards to more & more farmers so they can avail loans easily: PM Modi

11:45 am: Previous govts used to make a complicated web of promises and laws which farmers or labourers could never understand. But BJP-led NDA govt, has constantly tried to change this situation and has introduced reforms for the welfare of farmers: Prime Minister Narendra Modi 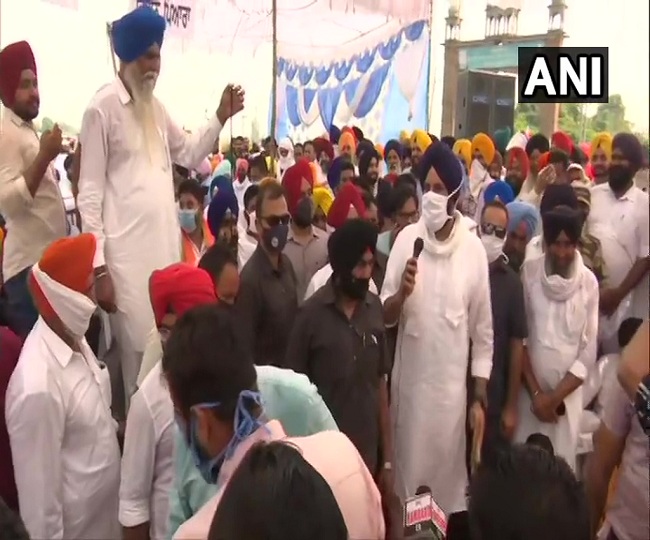 11:30 am: Rahul Gandhi on Friday sharpened his attack on the Centre over the agriculture bills passed by Parliament and said the contentious legislation would "enslave farmers."

The new agriculture laws will enslave our Farmers.#ISupportBharatBandh

11:15 am: Patna: Rashtriya Janata Dal (RJD) leader Tej Pratap Yadav sits atop a tractor while Tejashwi Yadav drives it, during the protest against #AgricultureBills passed in the Parliament.

#WATCH Patna: Rashtriya Janata Dal (RJD) leader Tej Pratap Yadav sits atop a tractor while Tejashwi Yadav drives it, during the protest against #AgricultureBills passed in the Parliament. #Bihar pic.twitter.com/kHEyuX9kmy

10:15 am: Patna: Rashtriya Janata Dal leader Tejashwi Yadav drives a tractor, as he takes part in the protest against #FarmBills passed in the Parliament.

#WATCH Patna: Rashtriya Janata Dal leader Tejashwi Yadav drives a tractor, as he takes part in the protest against #FarmBills passed in the Parliament. #Bihar pic.twitter.com/3CanJjtGo4

10:00 am: Govt has made our 'anndaata' a puppet through its 'fund daata'. #FarmBills are anti-farmer and have left them dejected. Govt had said that they'll double farmers' income by 2022 but these Bills will make them poorer. Agriculture sector has been corporatised: Tejashwi Yadav, RJD 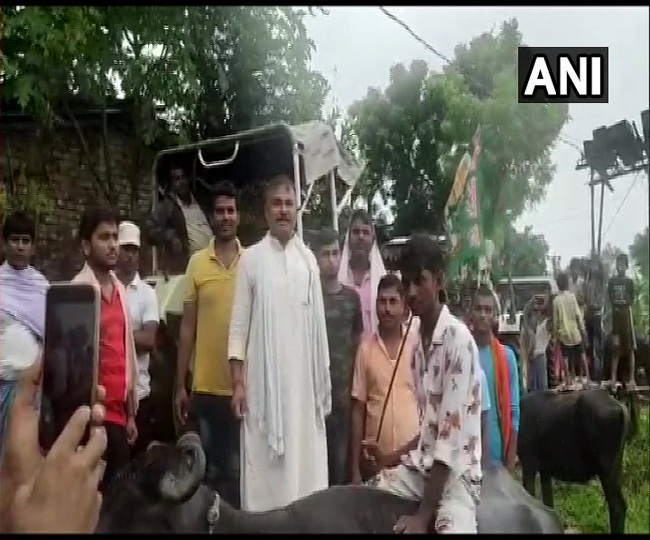 9:40 am: Police personnel deployed in Chilla area near Delhi-Uttar Pradesh border point, in wake of the nationwide protest called by farmers today against #AgricultureBills passed in the Parliament.

9:30 am: Members of Karnataka State Farmers' Association hold a protest near Bommanahalli on Karnataka-Tamil Nadu highway against #FarmBills passed in Parliament. Police personnel deployed in the area to ensure law & order is maintained & COVID safety norms are followed during the protest. 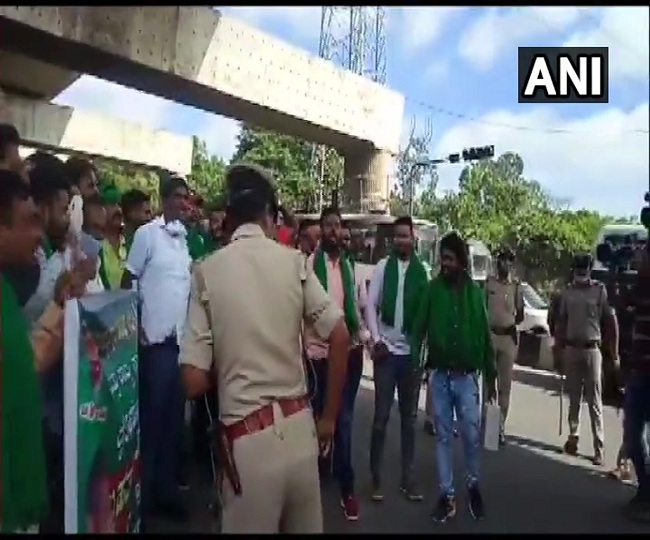 9:20 am: Farmers, under the aegis of Bharatiya Kisan Union and Revolutionary Marxist Party of India (RMPI), block Amritsar-Delhi National Highway near Phillaur in Jalandhar, in protest against #FarmBills passed in the Parliament. 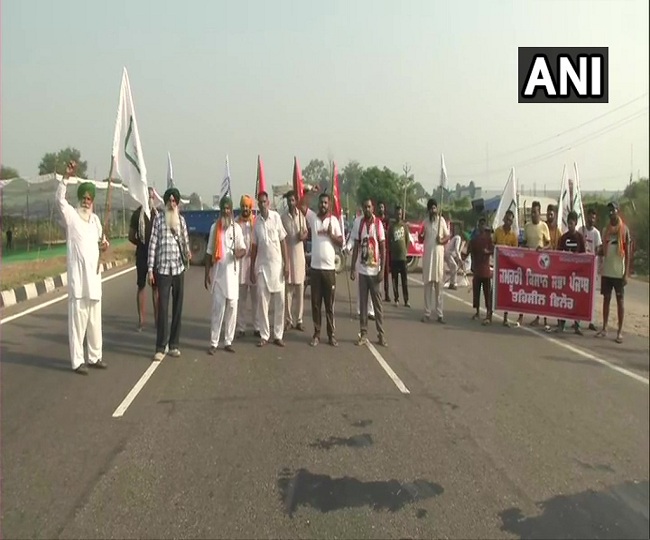 9:10 am: Punjab: Police personnel deployed in Amritsar city in the wake of farmers protest today, against #FarmBills passed in the Parliament. ACP says, "Security forces have been deployed at every crossroad and level crossing in the entire city so that no untoward incident takes place." 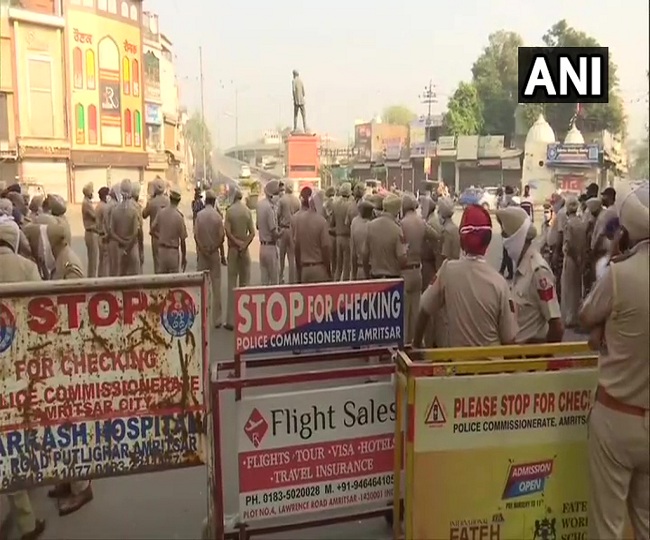 9:00 am: Punjab: Police personnel being deployed around Ladowal Toll Plaza in Ludhiana, in the wake of nationwide protest by farmers today, over #FarmBills. SHO Ladowal says, "All prepartions made, additional forces deployed. Farmer leaders have assured us that protest will be peaceful."