Farmers' Protest: Farmers ready to resume talks with govt on Dec 29; RLP quits NDA over legislations | As it happened

Farmers' Protest LIVE: Prime Minister Narendra Modi had virtually addressed the farmers on Friday and accused the opposition of misguiding them for "political gains".

New Delhi | Jagran News Desk: With protests against the three agri-marketing legislations completing a month, farmers unions on Saturday agreed to resume discussions with the Central government and proposed December 29 as the date for talks aimed at breaking the deadlock. Darshan Pal, President of Krantikari Kisan Union, said they will organise a tractor march from Singhu Border on December 30 if the government does not talk about repealing the laws during the sixth round of talks.

Yesterday, PM Modi, Union Ministers Amit Shah and Rajnath Singh had addressed the farmers in three different events on Friday and had accused the opposition of misguiding them. The Centre had even urged the farmers to try the three new farm laws as an "experiment" for a year or two and in case they are found not beneficial for the farming community, it will do all necessary amendments.

21:50: Rakesh Tikait, spokesperson of the Bhartiya Kisan Union, said he received death threats over phone. "It was a phone call from Bihar. They were threatening to kill me with arms. I have forwarded the recording to the police captain. They will do what is needed to be done next."

19:15: Rashtriya Loktanktrik Party (RLP) convener Hanuman Beniwal on Saturday announced his split from the Bharatiya Janata Party-led NDA over the three agri-marketing legislations passed by the Parliament in September. RLP is the second party after Akali Dal to quit the alliance over the farm laws.

18:20: Toll plazas in Punjab and Haryana will remain permanently open. On 30th December we will organize a tractor march from Singhu border: Darshan Pal, President of Krantikari Kisan Union

17:50: The first two points in our agenda for talks are- modalities to repeal the three farm laws, and mechanism & procedure to bring law for providing a legal guarantee on MSP (Minimum Support Price): Yogendra Yadav

17:50: Swaraj India chief Yogendra Yadav has said that farmers are ready to resume talks with the Central government at 11 am on December 29, ANI reported.

17:07 pm: Goa Chief Minister Pramod Sawant, meanwhile, has appealed to the farming community to accelerate and promote organic farming in the state resulting in the best quality of agricultural produce that would boost the state's economy.

16:53 pm: Just In: Former Lok Sabha MP Harinder Singh Khalsa resigns from BJP "in protest against the insensitivity shown by party leaders and the government towards the sufferings of the farmers, their wives and children protesting against the three agrarian laws".

16:40 pm: According to News18, the Sanyukt Kisan Morcha (SKM) has replied to Centre's invite for talks and proposed talks on Tuesday.

16:39 pm: Meanwhile, JD(S) leader and former Karnataka CM HD Kumaraswamy says "the ongoing farmers' protest in Delhi outskirts against three farm legislations of the Centre have started attracting the attention of not only the country, but the entire world. Close on the heels of concern expressed by the Canadian Prime Minister, parliamentarians from the US and Britain too have expressed their concern about the episode. The farmers' agitations have created an impression that some trouble is brewing in India".

16:29 pm: Some people are protesting over the reforms in the agriculture sector. I would like to appeal to them to come forward and discuss it with the government to find a solution: Union Home Minister Amit Shah

14:48 pm: Farmers of Haryana, Punjab, UP and Rajasthan are protesting against farm laws because PM Modi is doing injustice to them. Farmers of Madhya Pradesh are innocent but even Congressmen are sleeping. Wake up, join the stir and raise voices against these laws, Congress' Digvijaya Singh.

13:37 pm: Recap: Rahul Gandhi had on Thursday met President Ram Nath Kovind slammed the Centre for ignoring the farmers' demand to repeal farm laws, saying democracy is only in imagination in India.

"PM Modi is making money for the crony capitalists. Whoever will try to stand against him will be called terrorist - be it farmers, labourers and even Mohan Bhagwat," he said.

"NH-9 and NH-24 closed from Delhi to Ghaziabad due to farmers' protests. People are advised to take alternate route for Ghaziabad via DND, ITO and Wazirabad," tweets Delhi Traffic Police. 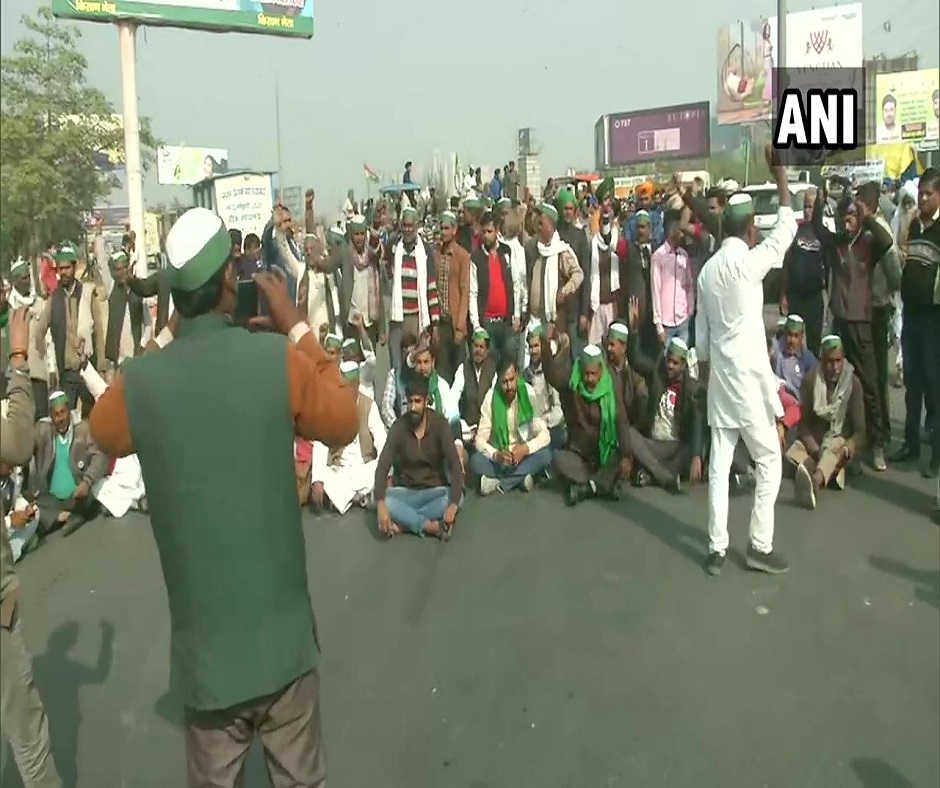 #FarmersProtest | Former CM @ShankersinhBapu today announced 'Challo Dilli' campaign in #Ahmedabad to support protesting farmers. While he is under detention at home, police stopped his supporters outside Gandhi Ashram & detained them.

12:08 pm: "Today, it has been a month since the farmers have been protesting. The Govt should repeal the three laws. As soon as that happens, we'll return to our homes," says a farmer from Punjab protesting at Delhi's Burari ground.

11:51 am: Recap: Amit Shah on Saturday called PM Modi farmers' "true well-wisher" and said asserted that the provision of MSP will continue.

11:10 am: Centre's 3 farm Laws have been implemented in Madhya Pradesh, and there's no confusion over it. In all 313 blocks of the state, we'll organise training on 3 farm aws, so our farmers can understand these laws & learn how to benefit from them: MP CM Shivraj Singh

10:46 am: There is no confidence in Modi government’s assurances for discussions with farmers since these bills were passed without any prior discussion and by preventing a vote in the House. No confidence in whatever they say, says Sitaram Yechury.

PM asking why no protests in Kerala! But there are big protests in Kerala. The state government’s decision to call a special session of the assembly to reject these bills is not being permitted by the governor. This is blatantly unconstitutional, he added.

10:10 am: Media reports suggest that farmer unions will meet around 2 pm today to discuss the government's offer of talks.

8:49 am: Meanwhile, seven US lawmakers have asked Mike Pompeo to raise farmers' protest with External Affairs Minister Dr S Jaishankar, saying it is affecting Sikh Americans linked to Punjab in the US.

"Many Indian Americans are directly affected as they have family members and ancestral land in Punjab and are concerned for the well-being of their families in India. In view of this serious situation, we urge you to contact your Indian counterpart to reinforce the United States' commitment to the freedom of political speech abroad," the lawmakers have told Pompeo.

8:01 am: Rahul Gandhi suddenly said you'll have to withdraw farm laws. I am giving him open challenge for a debate, whether the laws are good, in the interest of farmers or not. I am giving challenge to Rahul Gandhi and DMK to debate, says Union Minister Prakash Javadekar.

7:54 am: News18 quoted a farmer leader saying that unions' "demand for a legal guarantee on minimum support price will, however, remain the same".

7:50 am: The farmers had also held a meeting on Friday where most of the unions had hinted at "some positive" on Centre's invite for fresh round of talks.

7:45 am: The farmer unions will hold a crucial talk today and discuss Centre's invite for another round of talks.