Farmers Protest Highlights: 'Our movement will go on,' says farmers after meeting with Centre

Farmers' Protest Highlights: The Centre cited coronavirus pandemic and cold weather to expedite the talks with the protesting farmers on their concerns about the three new farm laws.

New Delhi | Jagran News Desk: The government on Tuesday expressed confidence that it will reach a solution after discussing issues raised by protesting farmers, as a meeting got underway between union ministers and representatives of over 30 farmer organisations. For the meeting at Vigyan Bhawan in Delhi, Union Agriculture Minister Narendra Singh Tomar was accompanied by Railways and Commerce and Industry Minister Piyush Goyal and Minister of State for Commerce Som Parkash, also an MP from Punjab.

"We are ready for a discussion to resolve their issues. Let's see," Tomar said as he arrived for the meeting. He further said the government will arrive at a solution after hearing the representatives of the farmer organisations. Hours before the meeting. Union ministers Rajnath Singh, Amit Shah, Narendra Singh Tomar and Piyush Goyal, along with BJP chief J P Nadda, had held marathon discussions over the farmers' protest against the Centre's new agriculture reform laws.

Meanwhile, extending his support to the protesting farmers across the country, Haryana Independent MLA Sombir Sangwan withdrew his support from the BJP-led Haryana government.

Here are the Highlights from the Big Story:

07:25 pm: Today's meeting was good & some progress was made. During our next meet on 3rd Dec with govt, we'll convince them that no clause of Farm law is pro-farmer. Our agitation will continue: Prem Singh Bhangu, President, All India Kisan Federation on meeting with Agriculture Minister

6:55 pm: Our movement against Farm Laws will continue & we'll definitely take back something from the Govt, be it bullets or a peaceful solution. We'll come back for more discussions with them: Chanda Singh, Member of Farmers' Delegation who met Union Agriculture Minister in Delhi today

06:50 pm: The meeting was good and we have decided that the talks will be held on 3rd December. We wanted a small group to be constituted but farmers' leaders wanted that the talks should be held with everyone, we do not have problem with it: Union Agriculture Minister Narendra Singh Tomar

06:10 pm: Many of the people in pictures do not appear to be farmers. What is in the interest of farmers has been done. It's not the farmers who have a problem with this (farm laws), but others. Besides opposition, people who get commission are behind it (protest): Union Minister VK Singh

5:15 pm: "You give names of 4-5 people from your organizations & constitute a committee in which there'll be representatives from govt as well as agricultural experts to discuss new agricultural laws", says Government. Meeting with farmers' leaders underway at Vigyan Bhawan

4:30 pm: Government leaders are giving statements that they will continue Minimum Support Price (MSP). What is the problem in incorporating this in the bill?: Ajay Chautala, Jannayak Janta Party (JJP) founder on #FarmersProtest

3:53 pm: Government has called the Punjab delegation at 3 pm. Later, the government will hold a meeting with delegations from Uttar Pradesh, Uttarakhand, Haryana, Delhi at 7 pm today. We all want a final decision on the matter: Naresh Tikait, President BKU at Ghazipur-Ghaziabad (Delhi-UP) border.

3:46 pm: There should be a proper dialogue & Centre should accept all demands proposed by farmers as they're being genuine. My purpose of visiting protest sites is to ensure basic facilities for protesting farmers: Delhi Cabinet Minister Kailash Gehlot during a visit to Burari protest site 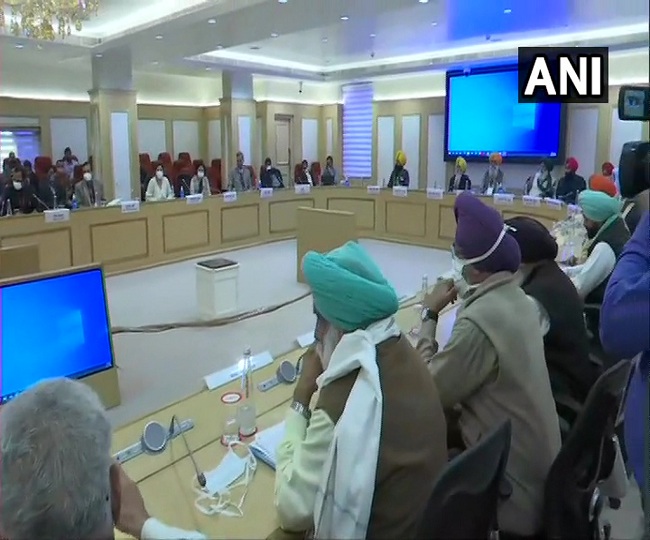 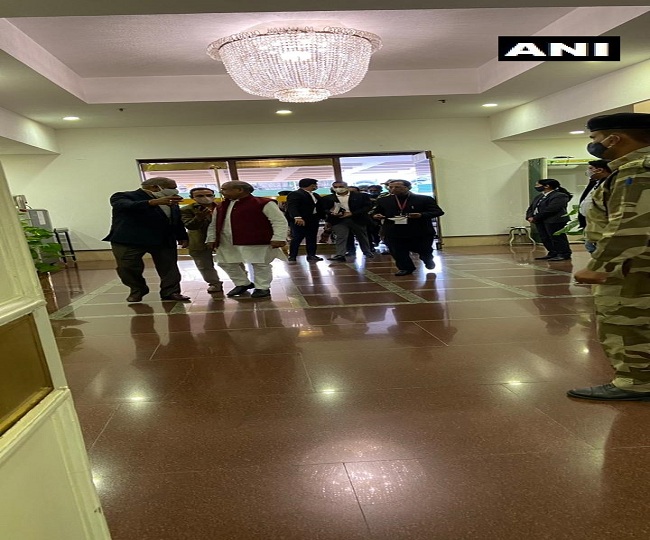 3:10 pm: Som Parkash ji, Piyush Goyal ji & I will be present in the meeting. The options which we will offer to them will depend on the exact demands which they present: Narendra Singh Tomar, Union Agriculture Minister on the meeting with farmers' leaders that will begin shortly

3:00 pm: We are daughters of farmers, we'll go to support farmers' protest today. We will raise our voice, the government should listen to us: Bilkis Dadi, Shaheen Bagh activist 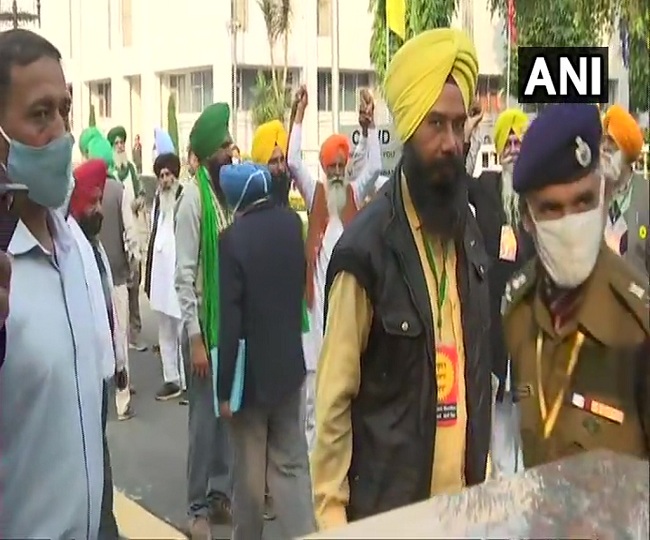 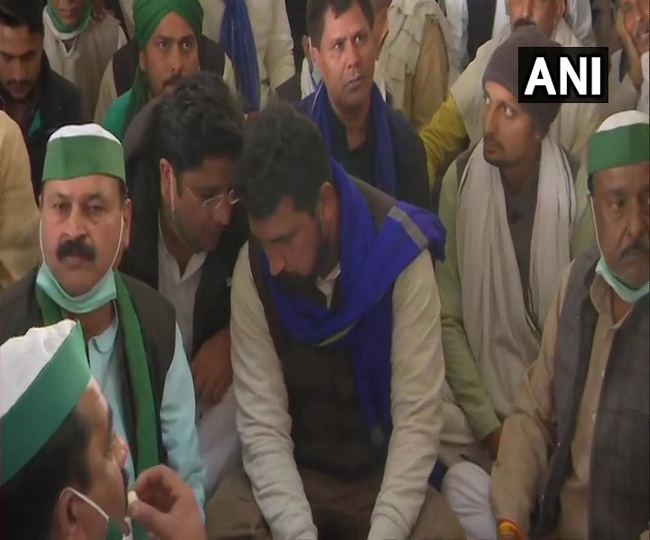 1:45 pm: Haryana: Independent MLA Sombir Sangwan withdraws his support from the Khattar led-Harayana govt. "In light of the atrocities committed on the farmers, I hereby withdraw my support to the current govt," he says, while in Charkhi Dadri

1:10 pm: Delhi: Union Agriculture Minister Narendra Singh Tomar leaves from the residence of BJP President JP Nadda. A meeting over farmers' protest was being held at the BJP President's residence 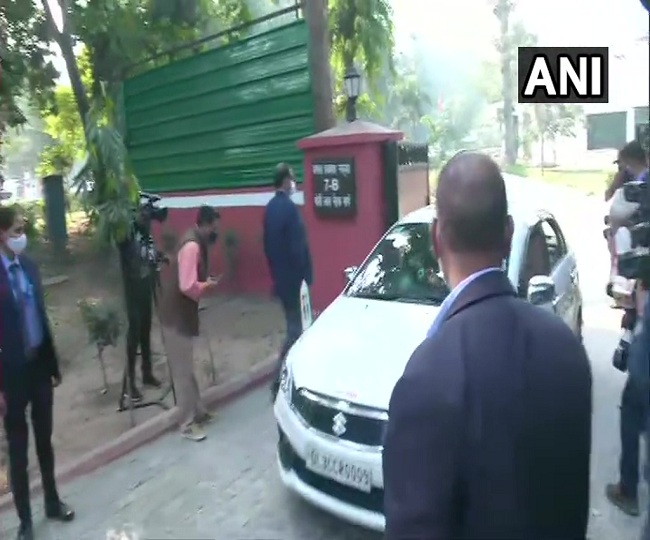 12:45 pm: I will attend the meeting called by the government at 3 pm today: RS Mansa, State President, Punjab Kisan Union

11:25 am: Delhi: Defence Minister Rajnath Singh arrives at the residence of BJP President JP Nadda, to hold a meeting over farmers protest

11:05 am: Farmer leaders have been invited for talks today at 3pm. The Government is always ready for talks: Union Agriculture Minister Narendra Singh Tomar

10:55 am: Singhu Border is still closed from both sides. Traffic has been diverted from Mukarba Chowk & GTK road: Delhi Traffic Police

10:45 am: Protesting farmers use a tractor to remove barricading done at Ghazipur-Ghaziabad (Delhi-UP) border

10:30 am: We're with protesting farmers like the entire country. But I'd like to clarify that Delhi autorickshaws & taxis won't go on strike. We've already been out of work for 4 months & can't afford strikes: Rajendar Soni, Mahamantri, Delhi Autorickshaw Union & Delhi Pradesh Taxi Union

9:15 am: Rahul Gandhi took to Twitter to express his solidarity with the protesting farmers and attack the prime minister. "The Modi government has persecuted the farmer - first it brought black laws and then used lathis against them, but it forgot that when the farmer raises his voice, it resonates throughout the country. You also raise your voice against the exploitation of farmers and join the #SpeakUpForFarmers campaign," Gandhi said in a tweet in Hindi.

9:00 am: There are more than 500 groups of farmers in the country, but the Govt has invited only 32 groups for talks. The rest haven't been called by the govt. We won't be going for talks till all groups are called: Sukhvinder S Sabhran, Jt Secy, Punjab Kisan Sangarsh Committee in Delhi 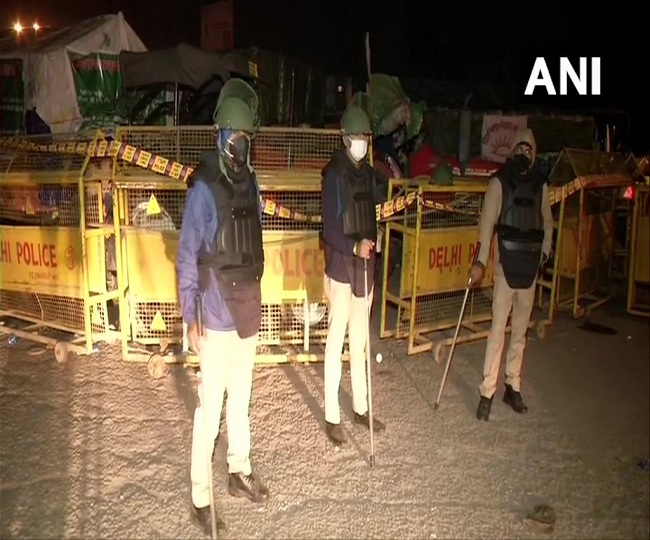 8:00 am: It was decided that next round of talks will be held on Dec 3 but farmers are agitating, it's winter & there's COVID. So meeting should be held earlier. So farmer leaders - present in 1st round of talks - have been invited at Vigyan Bhavan on Dec 1 at 3 pm: Agriculture Minister Narendra Singh Tomar said on Monday night.