Farmers' Protest: Agitators continue sit-in at UP Gate despite Yogi Govt's order to vacate | As it happened

New Delhi | Jagran News Desk: Farmers protesting against the three agri-marketing legislations refused to end the sit-in at the Ghazipur border on Thursday despite Yogi Adityanath-led Uttar Pradesh government's order to vacate the site. Spokesperson for the Bharatiya Kisan Union Rakesh Tikait said  he would commit suicide but won't end protest until farm bills are repealed.

Meanwhile, Union leaders at the Singhu border took out a rally to reinforce a sense of unity among the protesters after a tractor rally carried out in the national capital on the occasion of the Republic Day turned violent. Samyukta Kisan Morcha said the government was trying to put an end to movement against farm laws by blaming them for the January 26 violence.

10:33 pm: Farmer union leaders at the Singhu border took out a rally to reinforce sense of unity among protesters.

10:00 pm: 'It is time to pick a side. My decision is clear. I am with democracy, I am farmers and their peaceful protests', tweets Rahul Gandhi.

9:45 pm: Instead of taking action against real culprits, police arresting farmers who were protesting peacefully, Samyukta Kisan Morcha on violence

9:45 pm: The Government is trying to put an end to movement against farm laws by blaming us for January 26 violence; this is not acceptable, says Samyukta Kisan Morcha

9:45 pm: We will not be intimidated by notices sent by Delhi Police, Samyukta Kisan Morcha on police move following tractor rally violence.

9:30 pm: Bharatiya Kisan Union spokesperson Rakesh Tikait slaped a person at Ghazipur border. "He is not a member of our organisation. He was taking a stick and would have done something. He was misbehaving with media. All those who are here with ill intent should leave," Tikait said.

8:00 pm: The Delhi Police said that around 30 farmers from the DDA Ground in Burari have moved towards Singhu border and around 15 farmers have been detained for their possible involvement in violence on January 26 for violating laws.

19:28 pm: A notice has been served to them (farmers) under Section 133 of CrPC (conditional order for removal of nuisance), says Ghaziabad ADM City Shailendra Kumar Singh.

19:24 pm: We'll continue our sit-in protest and will not vacate site till talks with government are held. Administration has removed basic facilities including water and electricity supply. We'll get water from our villages, says Bharatiya Kisan Union spokesperson Rakesh Tikait.

18:58 pm: Uttar Pradesh government has ordered all DMs and SSPs to ensure the end of all the farmers' agitations in the state

18:26 pm: 33 FIRs have been registered at several police stations in Delhi in connection with Jan 26 violence. Nine of them have been transferred to the Crime Branch. Look Out Circulars have been issued against 44 people including farmer leaders in this matter: Delhi Police

18:02 pm: Ghaziabad officials have asked the farmers to end their protest at Delhi Gate.

Police barricading in place at Singhu border (Delhi-Haryana border), in order to restrict the protesters from coming to one side of the road from the other side. pic.twitter.com/yZZFBRVuWf

15:41 pm: I'll read the notice, they've given me 3-day time for reply...Farmers came here as responsibility of farmer unions and they take their responsibility. We had photographed the route given to us in writing. Police barricaded it and kept the route to Delhi free, says BKU leader Rakesh Tikait

Someone goes there and hoists a flag, why was no firing done? Where was the police? How did he go there? Police allowed him to leave and didn't arrest him. Nothing has been done even now. Who was the person who maligned an entire community and organisation, he added.

15:40 pm: Just In: Delhi Police Commissioner SN Shrivastava holds a meeting with the Special Commissioner of Police (Intelligence) and other senior police officers at the police headquarters, reports ANI.

15:01 pm: Meanwhile, Delhi Lieutenant Governor today also visited a hospital to enquire about the health of policemen injured in the violence during the farmers' tractor parade in the national capital on Republic Day.

15:00 pm: Members of Aam Aadmi Party (AAP) have protested against three black farm laws and will continue to do so which is why AAP will boycott President's speech. We continue to demand the repeal of three farm laws, this is the signature on death warrants of farmers, says AAP MP Sanjay Singh

We are with farmers and we want withdrawal of these laws. The farm laws have been passed forcibly. Modi government has badly handled the situation in Delhi and BJP is responsible for what had happened there. First tackle Delhi then think of Bengal, says West Bengal CM Mamata Banerjee.

Police could not tackle the situation in Delhi. If it would have Bengal then Amit bhaiya would have said, "kya hua?" We strongly condemn it. We want these three laws to be repealed. Either you withdraw the laws or leave the chair, she added.

#WATCH: Bharatiya Kisan Union (BKU) spokesperson Rakesh Tikait says that farmers will head to the local Police stations around Ghazipur border if the electricity is cut in the area, warns that the onus of what happens next would lie on the govt. (27.01.2021) pic.twitter.com/tFeDPkoSth

13:54 pm: We're issuing a statement from 16 political parties that we're boycotting President's Address that will be delivered at Parliament tomorrow. The major reason behind this decision is that the Bills (Farm Laws) were passed forcibly in House, without Opposition, says Congress' Ghulam Nabi Azad. 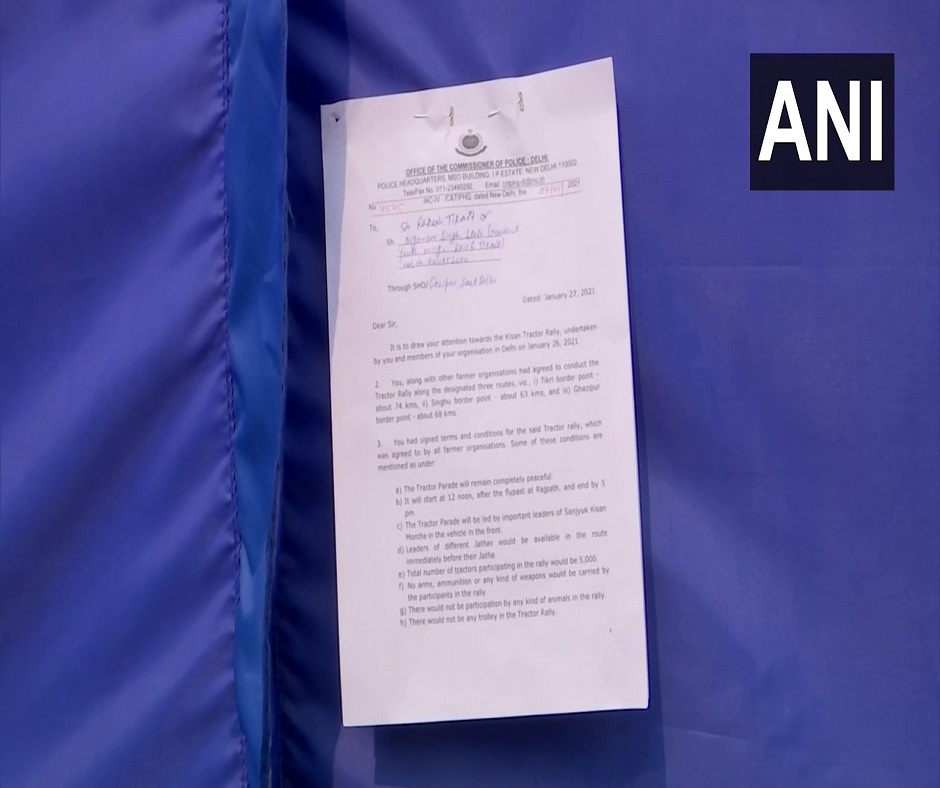 13:09 pm: Delhi Police issues notice to Bharatiya Kisan Union spokesperson Rakesh Tikait asking to explain as to why legal action should not be taken against him for breaching the agreement with police regarding the tractor rally on January 26.

"You are also directed to provide names of the perpetrators of such violent acts belonging to your organisation. You are directed to submit your response within 3 days," the notice reads.

12:31 pm: Delhi Chief Minister and AAP supremo Arvind Kejriwal today said that the violence that erupted on January 26 is "unfortunate" and strict action should be taken against anyone who is actually responsible for it.

"Whatever happened on that day cannot stop this movement. We all should support farmers but in a peaceful manner," he said. 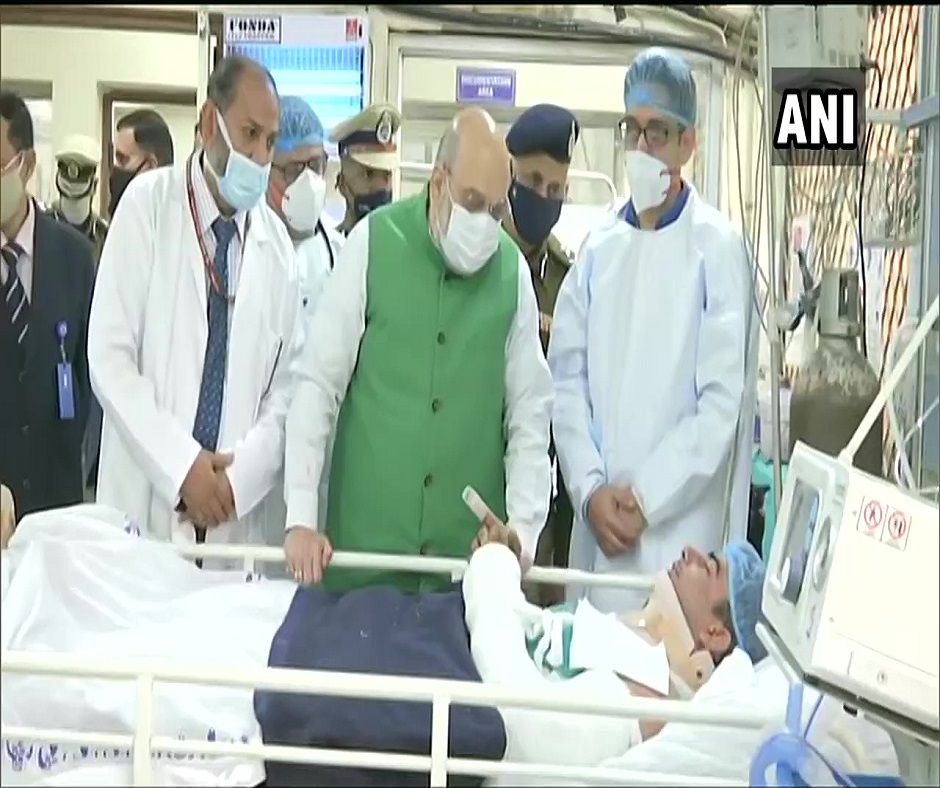 12:15 pm: Passports of the farmer leaders against whom a Lookout Notice has been issued will be seized as a part of the process, says Delhi Police

11:27 am: Just In: Delhi Police issues Lookout Notice (LOC) against farmer leaders with the help of immigration.

11:26 am: Farmers continue their protest at Tikri border. 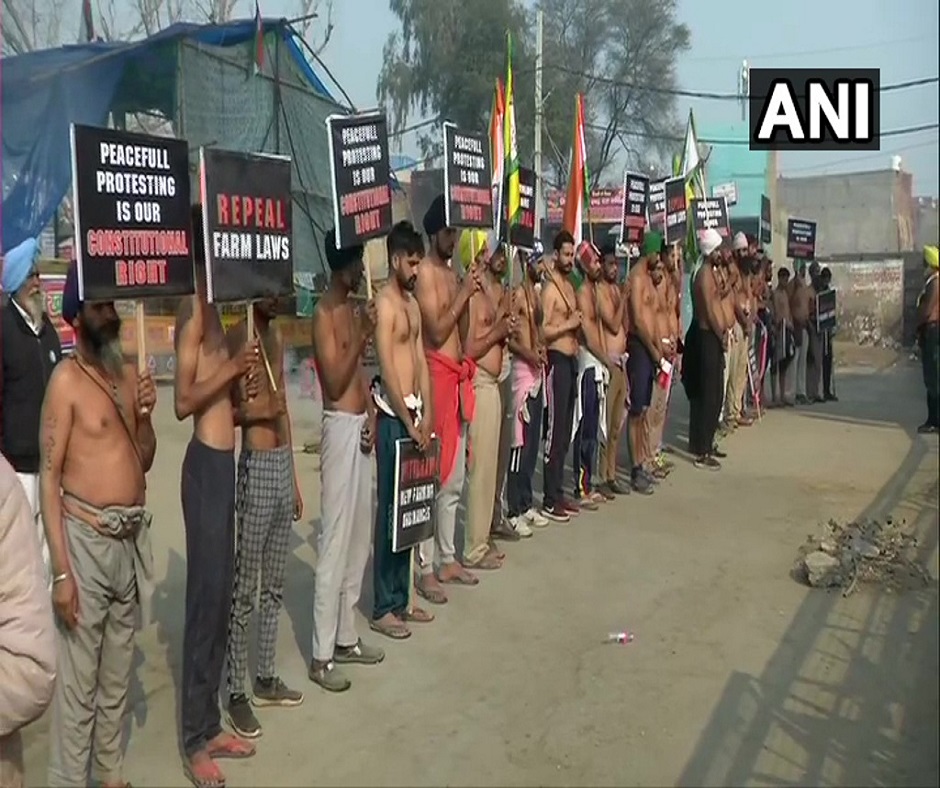 11:02 am: Latest visuals from Ghazipur border where farmers are protesting against farm laws. 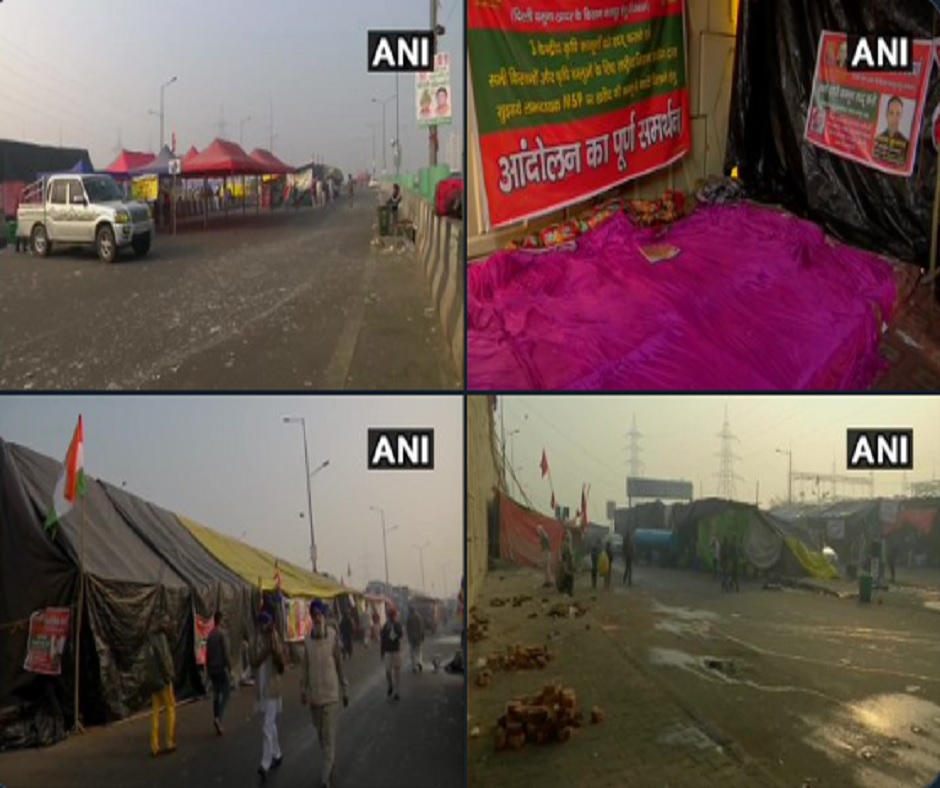 10:36 am: The Delhi Police today said that it has issued notices to at least 20 farmer leaders including Yogendra Yadav, Baldev Singh Sirsa, Balbir S Rajewal for breaching the agreement with police regarding the tractor rally.

"They have been asked to reply within 3 days," it said.

10:31 am: Also Read -- All you need to know about Deep Sidhu, the Punjabi actor blamed for Red Fort violence, and his Sunny Deol connection

10:30 am: The security forces, meanwhile, have decided to close the Red Fort till January 31 in aftermath of the Republic Day violence.

10:25 am: Amid this, the farmers have cancelled their Budget day march to Parliament. Two farmer unions -- Rashtriya Kisan Mazdoor Sangathan and Bharatiya Kisan Union (Bhanu) -- have withdrawn their support from the ongoing farmers' protests against three new farm acts.

10:20 am: Meanwhile, Deep Sidhu has gone missing. Media reports suggest that Sidhu's mobile phone is switched off and he is untraceable.

10:15 am: Union Home Minister Amit Shah to visit two hospitals where police personnel injured in the violence during farmers' tractor rally on January 26 have been admitted in north Delhi.