Farmers' Protest: 'Consensus reached on 2 out of 4 issues', says Tomar; 7th round of talks to be held on Jan 4 | As it happened

LIVE Farmers' Protest: Ahead of the crucial sixth round of talks after a three-week hiatus, Narendra Singh Tomar and Piyush Goyal met Home Minister Amit Shah to discuss and finalise the government's position for the meeting.

New Delhi | Jagran News Desk: The sixth round of talks between farmer unions and the central government held on Wednesday to end the deadlock on the three agri-marketing legislations, ended on a positive note, with both sides reaching consensus on two out of four issues, Union Agriculture Minister Narendra Singh Tomar has said. The next round of talks will be held on January 4, with focus on MSP guarantee and three laws.

Earlier in the day, the ministers joined farm leaders to share 'langar' food arranged by protesting farmers during their sixth round of talks. The 'langar' (community kitchen) food arrived in a van at the meeting venue, Vigyan Bhawan, after around two hours of discussions had taken place and the two sides took a break for tea and snacks.

The fifth round of talks was held on December 5. The protesting farmer unions are sticking to their hardline position that the discussions will only be on the modalities of repealing the three new Agri laws and giving a legal guarantee on the MSP among other issues.

7:40 pm: Union Agriculture Minister Narendra Singh Tomar has said the seventh round of talks between the government and union leader will be held on January 4.

7:40 pm: Farmers feel that if reform is introduced in the Electricity Act, they'll suffer loss. Unions wanted that electricity subsidy given to farmers by states for irrigation should continue. The consensus was reached on this issue also: Union Agriculture Minister Narendra Singh Tomar

7:40 pm: First issue was an ordinance related to the Environment. Unions were apprehensive about farmers being included along with Parali ones. Both sides agreed to farmers' exclusion: Union Agriculture Minister Narendra Singh Tomar on 6th round of talks with farmers' unions

7:35 pm: Union Agriculture Minister Narendra Singh Tomar said that the sixth round of talks ended on a positive note, with government and farmer unions reaching consensus on two out of four issues.

5:30 pm: During discussions, the government tells farmer leaders that a committee could be formed to deliberate on the farmers' demands regarding the three farm laws.

5:00 pm: As farmers' protest against three new farm laws continues, union leaders on Wednesday said peasants in some parts of the country are being forced to sell crops including paddy below the Minimum Support Price as market rates have fallen and asserted that the agitation will continue till the government agrees to their demands.

4:45 pm: Taking a dig at Prime Minister Narendra Modi on Wednesday, Congress leader Rahul Gandhi said the farmers do not trust the prime minister due to his "long history of asatyagraha".

4:30 pm: The Shiromani Akali Dal and the Congress on Wednesday urged farmers protesting against the Centre's farm laws to talk directly with Prime Minister Narendra Modi, saying otherwise the dialogue will not yield any result.

4:00 pm: Delhi: Union Ministers Piyush Goyal & Narendra Singh Tomar having food with farmers leaders during the lunch break at Vigyan Bhawan where the govt is holding talks with farmers on three farm laws. 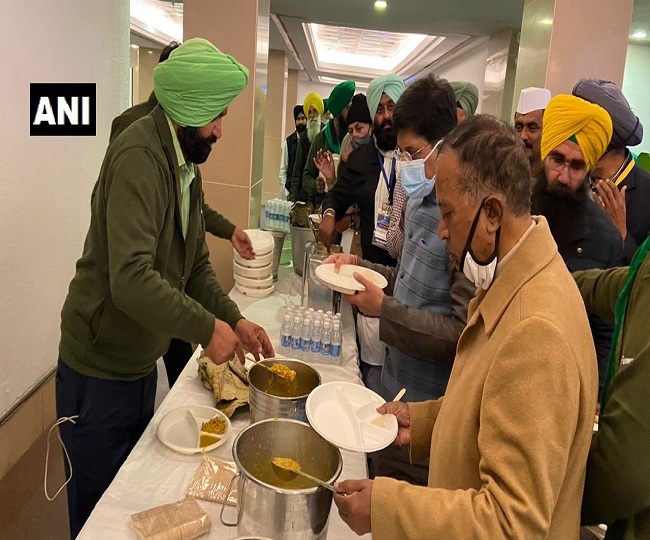 3:00 pm: Farmers leaders demand justice and compensation for the families of the farmers who died during the protest

1:45 pm: Bharatiya Kisan Union spokesperson Rakesh Tikait, who is a part of the delegation holding talks with the Union Government over farm laws, leaves for Vigyan Bhawan in Delhi from Ghazipur border (UP-Delhi border) for today's talks between farmers and government

1:15 pm: Delhi: A delegation of farmer leaders arrives at Vigyan Bhawan for talks with the Union Government. A farmer leader says, "Our stand is clear that the three farm laws should be taken back."

12:20 pm: A delegation of farmers leaders leave Singhu border to hold talks with Centre over three farm laws Union Government will hold sixth round of talks with the protesting farmers today. 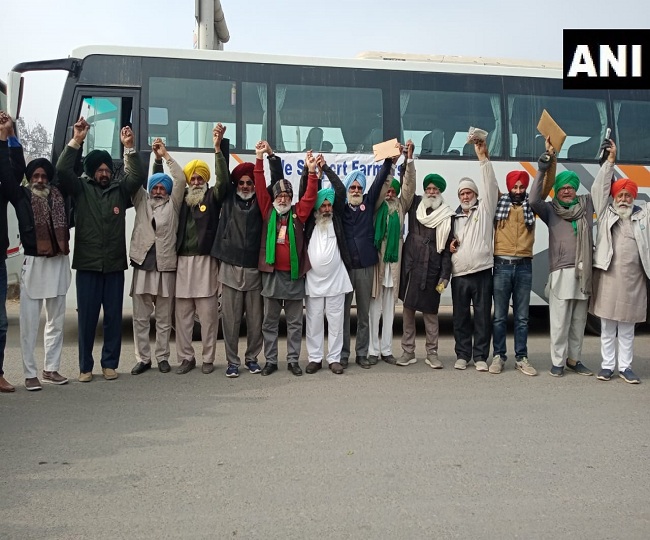 12:00 pm: Reliance Jio Infocomm has written to Punjab CM and Punjab DGP seeking their intervention into "incidents of sabotage and vandalism at Jio Network sites" in Punjab by unknown persons

11:30 am: Such things should not happen. Our farmers from Punjab should think about this. The acts of vandalism should stop: Defence Minister Rajnath Singh on being asked about mobile towers vandalised in Punjab

11:00 am: We hope that the talks will be decisive. Talks will be held on all issues including MSP with an open heart. I hope that farmers' agitation ends today: Som Prakash, Minister of State for Commerce & Industry on govt-farmers' talks today

10:20 am: Five rounds of talks between farmers and govt have taken place. We don't think we will reach a solution even today. The three farm laws should be repealed: Sukhwinder Singh Sabra, Joint Secy, Kisan Mazdoor Sangharsh Committee, Punjab ahead of the sixth round of talks with govt

10:00 am: It's essential to have strong opposition in the country whom the govt fears but here they don't. This is why farmers had to come on roads. Opposition should sit in pitched tents& stage protest on roads against the farm laws: Rakesh Tikait, Bharatiya Kisan Union at Ghazipur border

9:25 am: With a ray of hope, farmers protesting against the new farm laws are set to hold talks with the Centre. They are expected to reiterate the four-point agenda for talks including modalities to repeal farm laws and a mechanism to bring a law for providing a legal guarantee on Minimum Support Price (MSP).

9:00 am: At the Chilla border, Bharatiya Kisan Union (Bhanu) supporters, hailing from various districts of western Uttar Pradesh, also practised march-past, saying they are preparing to hold a parade on the Republic Day if their protest extends till January 26.

8:45 am: Farmers burnt copies of the three new agri-marketing laws at the Delhi-Noida border on Tuesday, even as they remained resolved in their demand for withdrawal of the contentious legislation for the 29th day.

8:30 am: The farmer associations have demanded that today's talks should only focus on modalities of repealing the three new agri laws and giving a legal guarantee on the MSP

8:15 am: Farmers continue their hard stand on farm laws and demand repeal of the legislation before ending their protest at Delhi borders.

8:00 am: Ahead of the crucial talks today, Home Minister Amit Shah met Narendra Singh Tomar and Piyush Goyal on Tuesday to discuss the proposals Centre will give to the farmers in today's talks.