LIVE Farmers' Protest: The protesting farmer unions, who have stuck to their demand for a complete repeal of all three agri-laws, have not yet conveyed their decision on the central government's offer for fresh talks.

New Delhi | Jagran News Desk: Union Minister Prakash Javadekar on Thursday accused Congress of ignoring farmers' interest and challenged Rahul Gandhi for an open debate on what the party did for farmers when they were in power for ten years between 2004 and 2014. "I will prove how the Congress always ignore farmers' interests and how Modi empowered them. Farmers always demanded remunerative price for their produce but the Congress never did so," Javadekar said, as quoted in a report by news agency PTI.

The stalemate between the government and the farmers over the new farm laws entered its 29th day today with more farmers reaching Delhi borders to join the massive agitation by farmers of mostly north Indian states, including Punjab, Haryana, Rajasthan and UP. The government is trying to break the deadlock with Agriculture Minister Narendra Singh Tomar reiterating his hope that protesting farmers will soon come forward to resume their dialogue with the Centre to resolve the issue. The minister said any agitation can be resolved only through dialogue as has been the case always in history and urged the protesting unions to fix a date and time for the next round of talks.

The protesting farmer unions, who have stuck to their demand for a complete repeal of all three agri-laws, have not yet conveyed their decision on the central government's offer for fresh talks. Thousands of farmers have been camping on various borders of the national capital for almost four weeks now. The government has already sent a draft proposal to unions offering at least seven amendments to the three legislations that were enacted in September.

7:05 pm: I want to thank you all for supporting 3 Farm laws & coming here for a direct dialogue with us. I got to know that Kisan Sena farmers were coming to Delhi to protest in support of Farm Laws, but then upon intervention, you decided to come here & talk to us: Agriculture Minister

6:24 pm: Meanwhile, Rajya Sabha MP Sonal Mansingh has accused Delhi Chief Minister Arvind Kejriwal of "blatant contempt" of the Upper House during his speech in Delhi Assembly on the contentious farm bills and has filed a breach of privilege notice against him.

In a notice filed with Rajya Sabha Chairman M Venkaiah Naidu, the nominated MP, who is affiliated to the BJP, has objected to Kejriwal's claim that the presiding officer in the House announced the passage of three agri reform bills while opposition members kept demanding a division of votes.

4:40 pm: We demand that the present Agri Laws be repealed along with the Electricity (Amendment) Bill 2020. Following this, discussions on agrarian reforms must be held by the Central government with the farmers and all stakeholders: Joint statement by Opposition parties

4:20 pm: We register our strong protest against baseless allegations being made by PM accusing opposition parties of “repeatedly lying” to farmers about new farm laws& “using them for their politics”. PM's accusations are a complete travesty of truth: Joint statement by Opposition parties

4:10 pm: If Rahul Gandhi was so worried, then he could have done something for farmers, when his govt was in power. Congress' character has always been anti-farmer: Union Agriculture Minister Narendra Singh Tomar on Congress leader Rahul Gandhi meeting President today over Farm Laws

4:00 pm: Whatever Rahul Gandhi says, even Congress doesn't take it seriously. Today when he went to register his protest with President with signatures, these farmers told me that no one from Congress came to them to get their signature: Union Agriculture Minister Narendra Singh Tomar

3:45 pm: Farmers from Baghpat have given me a letter in support of Centre's Farm Laws. They've told me that govt shouldn't buckle under any pressure to make amendments to Farm bills: Union Agriculture Minister Narendra Singh Tomar after meeting Kisaan Mazdoor Sangh members from Baghpat

3:00 pm: Delhi: Basketball player Satnam Singh joins farmers' protest at Singhu border. "We stand with farmers. We have come to offer our services so they don't face any problems," he says.

1:00 pm: Govt writes to agitating farmers, asking them to decide the date and time for the next round of talks. "Govt is committed to reaching logical solutions of the issues raised by you," it reads

12:30 pm: PM Modi is making money for the crony capitalists. Whoever will try to stand against him will be called terrorist - be it farmers, labourers and even Mohan Bhagwat: Congress leader Rahul Gandhi 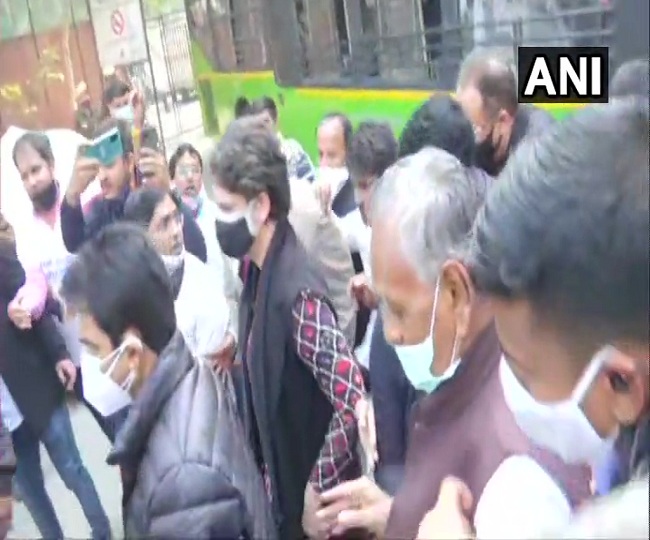 12:18 pm: I want to tell the PM that these farmers are not going to go back home until these farm laws are repealed. Govt should convene a joint session of Parliament and take back these laws. Opposition parties stand with farmers & labourers: Congress leader Rahul Gandhi

12:13 pm: Delhi: Congress leaders Rahul Gandhi, Ghulam Nabi Azad & Adhir Ranjan Chowdhury visit Rashtrapati Bhavan. Gandhi says, "I told the President that these farm laws are anti-farmer. The country has seen that farmers have stood up against these laws".

12:05 pm: I feel the government is stuck on the farm laws issue because of its ego. They have called farmers Khalistani, Naxals, terrorists, and whatnot. The delay tactics of the govt are not working anymore: Delhi Minister Gopal Rai on farmers' protest

11:55 am: Sometimes they say we are so weak that we don't qualify as Opposition and sometimes, they say that we are so powerful that we have made lakhs of farmers camp at the border (of Delhi) for a month. They should first decide what we are: Congress leader Priyanka Gandhi

11:50 am: It is a sin to use the kind of names they (BJP leaders & supporters) used for farmers. If Govt is calling them anti-nationals, then the govt is a sinner: Congress leader Priyanka Gandhi

11:45 am: We're living in democracy & they are elected MPs. They have the right to meet the President & they should be allowed. What is problem with that? Govt is not ready to listen to voices of lakhs of farmers camping at borders: Congress' Priyanka Gandhi after being stopped by police

11:42 am: Delhi Police take Priyanka Gandhi and other Congress leaders into custody. They were taking out a march to Rashtrapati Bhavan to submit to the President a memorandum containing 2 crore signatures seeking his intervention in farm laws issue. 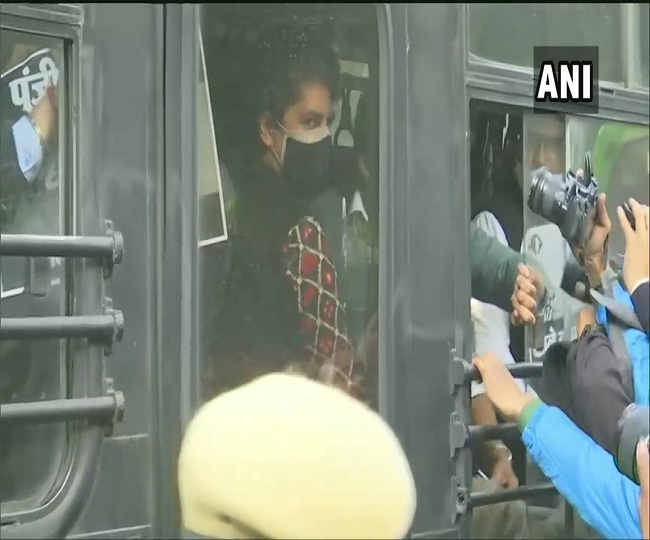 11:35 am: Delhi: Congress' march to Rashtrapati Bhavan stopped by police. "Any dissent against this govt is classified as having elements of terror. We are undertaking this march to voice our support for the farmers," says Congress leader Priyanka Gandhi. 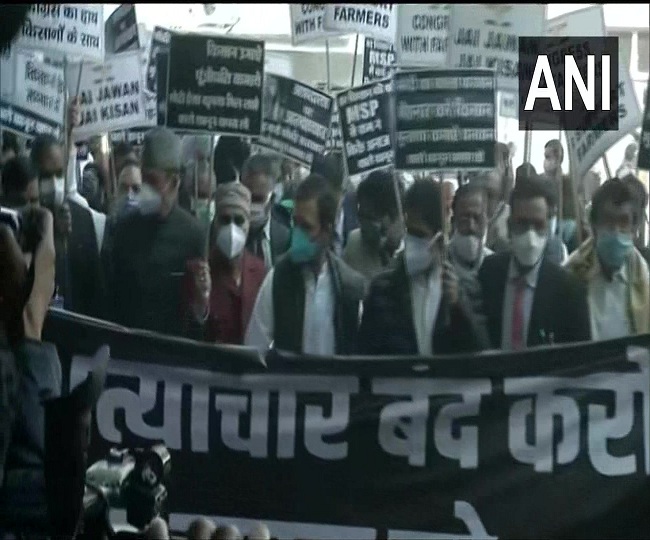 11:10 am: Delhi: Congress leader Rahul Gandhi meets senior party leaders & MPs at party headquarters. He is scheduled to lead a march from Vijay Chowk to Rashtrapati Bhavan to submit to the President a memorandum containing 2 crore signatures seeking his intervention in farm laws issue. 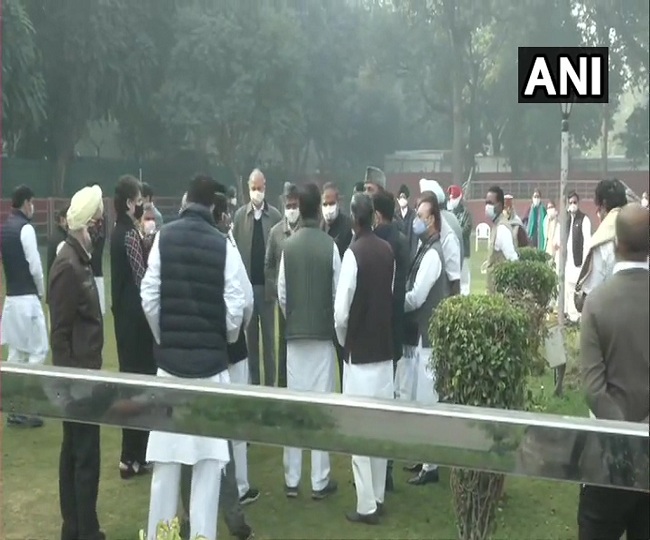 11:00 am: Only the leaders, who have permission, will be allowed (to go to Rashtrapati Bhavan): Chanakyapuri ACP Pragya

10:50 am: BJP chief JP Nadda has instructed party MPs, MLAs & other party leaders to attend tomorrow's programme at block level, which will be held for farmers to listen to PM Modi's address on the occasion of the transfer of 18,000 crores in accounts of 9 crore farmers under PM-KISAN

10:35 am: We will march to Rashtrapati Bhavan. We want govt to atone for their complete lack of consulting farmers before passing these bills. I think President has an important moral role in encouraging & guiding govt to not stand on their legislative pride: Congress leader Shashi Tharoor

10:10 am: No permission has been granted for Congress' march to Rashtrapati Bhavan today. However, three leaders, who have appointment at Rashtrapati Bhavan, will be allowed to go: Additional DCP (New Delhi) Deepak Yadav

9:30 am: The Haryana Police booked 13 farmers on charges of attempt to murder and rioting on Wednesday, a day after a group of people protesting against the Centre's farm laws allegedly blocked Chief Minister Manohar Lal Khattar's convoy and hurled sticks at it.

9:15 am: Asserting that the ball is in the Centre's court, protesting farmer unions on Wednesday asked it to come up with a new concrete proposal for resumption of talks, even as Agriculture Minister Narendra Singh Tomar underscored that dialogue was the only way to reach a resolution and the government was committed to reforms in the farm sector.

9:00 am: Union Agriculture Minister Narendra Singh Tomar said any agitation can be resolved only through dialogue as has been the case always in history and urged the protesting unions to fix a date and time for the next round of talks.

8:40 am: Farmer union Kisan Sena said thousands of its members from western Uttar Pradesh will march to Delhi on Thursday in support of the Centre's new agriculture laws. The march will have members joining from the Braj area, which includes districts like Mathura, Agra, Firozabad, Hathras and also have supporters joining from Meerut and Muzaffarnagar in western UP, the union said.

8:20 am: The Congress held protests across Uttar Pradesh on Wednesday against the contentious farm laws by clapping, and clanging of pots and pans in an attempt to wake up the government from "deep slumber".

8:00 am: Vice President M Venkaiah Naidu on Wednesday emphasized that dialogue is the way forward to resolve the issues raised by farmers. Interacting with a group of progressive farmers on the occasion of Kisan Diwas at his residence in Hyderabad, Naidu said that any issue could be resolved through talks and added that the government has already declared that they are always ready to hold a dialogue with the farmers' organizations.