Farmers' Protests LIVE: The farmer leaders are expected to meet today to discuss the next plan of action amid efforts by the unions to draw support from farmers in other states like Bihar for their demand to enact a law assuring MSP.

The farmer leaders are expected to meet today to discuss the next plan of action amid efforts by the unions to draw support from farmers in other states like Bihar for their demand to enact a law assuring Minimum Support Price. The opposition too stepped up the pressure with the Shiromani Akali Dal demanding an emergency Parliament session to annul the new laws, while the Left Democratic Front government in Kerala has decided to convene a special session on Wednesday to pass a resolution against the Acts. Meanwhile, thousands of farmers from Maharashtra on Monday left for Delhi from Nashik to join the ongoing agitation by cultivators seeking the repeal of three agri laws passed by the Centre.

Here are the LIVE Updates from the BIG Story:

7:30 pm: Around 2 crore signatures from across India, urging the withdrawal of the three farm laws have been collected. It will be submitted to the President of India by a delegation of Congress leaders led by Rahul Gandhi on 24th Dec: Congress leader KC Venugopa

7:15 pm: We are keeping a good working relationship with the farmer leaders so as to see that everything goes well. This is helpful for us to get regular information: Delhi Police Commissioner SN Srivastava

6:45 pm: Kerala: Governor Arif Mohammed Khan has refused to give assent to the special assembly session of the state legislative assembly. The special session of the assembly to be held on December 23 was to discuss and reject the Centre's new farm laws.

6:30 pm: Some farmer leaders (from UP) met me today to extend their support to the farm laws. They said that no amendments should be made in the three laws: Union Agriculture Minister Narendra Singh Tomar in Delhi

6:15 pm: The UK PM is scheduled to visit India on 26th January. We are writing to British MPs asking them to stop the UK PM from visiting India till the time farmers' demands are not met by the Indian government: Kulwant Singh Sandhu, farmer leader from Punjab at Singhu border

5:30 pm: In today's meeting, it was decided what decision will be taken on the proposal sent by the Centre: Kulwant Singh Sandhu, farmer leader from Punjab at Singhu border

5:00 pm: Farmers agitating at Ghazipur (Delhi-UP) Border open one way of the road for the commuters. "Reopening of this road is convenient for us as we are able to save some time," says a commuter travelling from Delhi to Ghaziabad

4:30 pm: This is not a step forward by the govt but a way to trick farmers. A normal person would think that farmers are stubborn but the fact is that we don't seek amendments in farm laws, we want them to be completely shunned: Sarwan Singh Pandher, Kisan Mazdoor Sangharsh Committee

4:00 pm: Govt has decided its position regarding the farm laws that they'll not be withdrawn. They released a letter stating that if farmers want amendments in these laws, they must provide date & time for discussion: Sarwan Singh Pandher, Kisan Mazdoor Sangharsh Committee at Singhu border

3:45 pm: Commuters on Tuesday faced difficulty due to the closure of both carriageways on the Delhi-Meerut Expressway as protesting farmers blocked the Ghazipur (Delhi-Ghaziabad) border completely.

3:30 pm: The All India Trade Union Congress (AITUC) and its associate unions will observe December 23 as "Skip Lunch" day to express solidarity with the relay hunger strike by farmers.

3:15 pm: Protesting farmers on Tuesday showed black flags to Haryana Chief Minister Manohar Lal Khattar in Ambala where he went for canvassing of party's mayoral and ward candidates.As his convoy was passing from Aggarsain Chowk in Ambala, the farmers tried to block it. However, the police prevented them and ensured a safe passage for the Chief Minister.

3:00 pm: The Delhi High Court Women Lawyers' Forum (DHCWLF) on Wednesday decided to observe a fast in solidarity with the farmers who are protesting against the three new farm laws, at various borders of the national capital. "We lawyers have decided to fast in solidarity with the ongoing farmers 'Satyagrah' on December 23, which is also celebrated as 'Kisan Diwas', demanding a repeal of the hastily enacted farm laws," said a member.

1:30 pm: The Indian government is ready to hold further talks with farmers protesting for the repeal of agricultural reform laws, Agriculture Minister Narendra Singh Tomar said on Tuesday. Prime Minister Narendra Modi's government has been urging the farmers to engage in talks to end the deadlock over the three reform laws introduced in September but the farmers will not relent on their demands, saying the laws would hit them economically while benefiting big retailers.

1:00 pm: Protesting farmers on Tuesday has blocked Delhi's Ghazipur border completely, as the farmers' protest against new farm laws has entered day 27. "Ghazipur border has been closed for traffic from Delhi to Ghaziabad. It was already closed for traffic from Ghaziabad to Delhi. Traffic has been diverted from Nizammudin Khattha, Akshardham and Ghazipur Chowk for onward journey via Anand Vihar, Apsara, Bhopra, and Delhi Noida Direct (Flyway) (DND)," said Additional Commissioner of Traffic Police, Outer Range, Delhi.

12:30 pm: The Central Government must shun its ego and agree to the demands of the farmers that are reasonable and the farm laws must be repealed with immediate effect, said Raghav Chadha, Aam Aadmi Party (AAP) leader. "Centre must let go of this ego and agree to all demands of farmers. No resolution seems to be in sight. The government must repeal three black laws with immediate effect," said Chadha.

12:00 pm: Armed with hope and a revolutionary poem by noted Punjabi poet 'Pash', a farmer cycled nearly 400 km from Fardikot to the Tikri border here to join the massive protest by peasants against the new farm laws.

11:00 am: Delhi: Protesting farmers block Ghazipur (Delhi-Ghaziabad) border completely. Traffic from Delhi towards Ghazipur & Ghaziabad on Delhi-Meerut Expressway affected as both side carriageways closed for traffic. 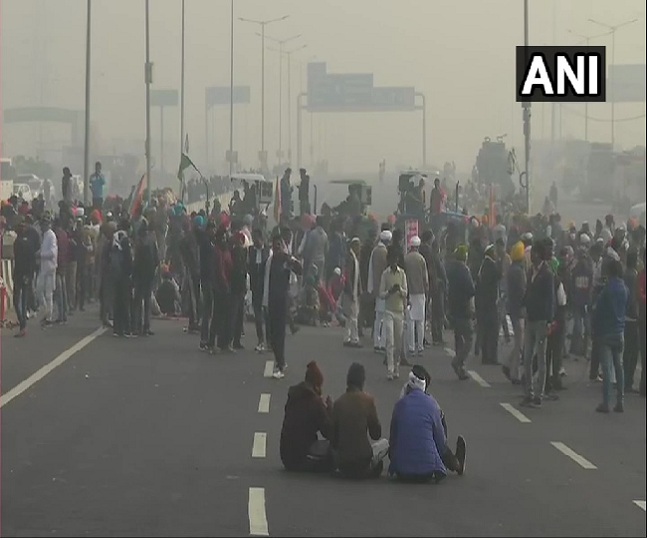 10:25 am: We're not causing inconvenience to anyone. Yesterday, farmers were only talking to commuters for a few minutes on Delhi-Ghazipur road and didn't block any road. Farmers told commuters that they should discuss farmers' issues at their home too: Rakesh Tikait, Spokesperson, BKU

10:00 am: We have not received any meeting invitation from Agriculture Minister yet. Farmers have decided they won't go back till govt takes back all 3 Farm laws. It will take more than a month to resolve all issues. Govt will come to us: Rakesh Tikait, Spokesperson, Bhartiya Kisan Union 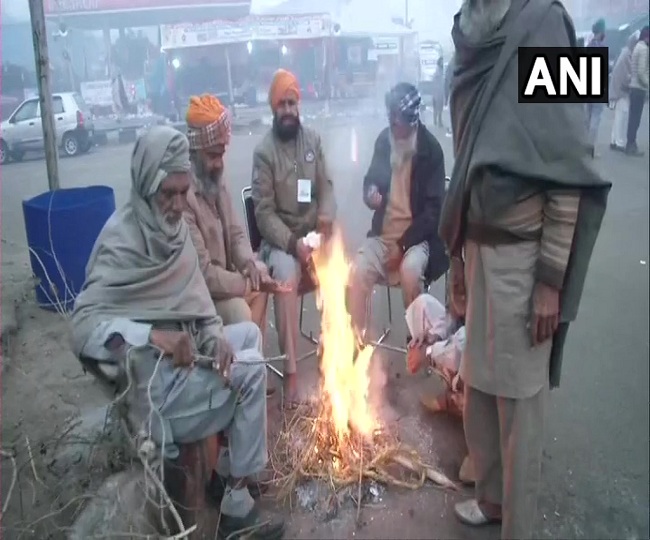 9:25 am: Thousands of farmers from Maharashtra on Monday left for Delhi from Nashik to join the ongoing agitation by cultivators seeking the repeal of three agri laws passed by the Centre. The farmers, who started off in private vehicles, were led by leaders of the Kisan Sabha. Before proceeding to Delhi in the afternoon, the farmers burnt effigies of Central leaders. A Kisan Sabha leader said farmers from 21 districts in Maharashtra are on their way to Delhi.

9:15 am: Farmers protesting against agriculture laws on Jaipur-Delhi highway in Alwar's Shahjahapur on Monday accused the Centre of not looking into their demands despite a threat to their livelihood.

8:45 am: Shiromani Akali Dal chief Sukhbir Singh Badal on Monday accused the Centre of the bid to “defame” agitating farmers by raising the “bogey of talks” to create an impression that it is reasonable and farmers are wrong.

8:30 am: Bharatiya Kisan Union demanded a new law for punishing those who buy farmers' crops at rates below the minimum support price. The BKU (Lok Shakti) raised the new demand over and above the farmers' existing demand to repeal the three recent farm laws of the Centre.