Farmers' Protest: However, the farmers will not be blocking roads in Delhi, Uttar Pradesh and Uttarakhand during the nationwide 'chakka jam' today.

New Delhi | Jagran News Desk: Around 50,000 personnel of Delhi Police, Paramilitary and Reserve Forces deployed in Delhi-NCR region to maintain law and order situation here on Saturday, amid 'chakka jaam' call by the protesting farmers' representatives. At least 12 metro stations have also been put on alert, police said. Meanwhile, security across Delhi tightened on Saturday with the deployment of extra forces, putting up multi-layered barricades and barbed wires on the roads ahead of the proposed 'chakka jam' by farmer unions.

Heavy deployment of police personnel seen at Red Fort, as a preventive measure to dispel actions resulting from the calls for 'Chakka Jaam.' Police along with the barricading measures at the Minto Bridge area deployed. The area has been blockaded as a peremptory counter-measure to thwart the calls. Barbed wires placed over police barricades seen in Delhi's ITO area.

4:15 pm: Wherever we had inputs that some groups or people can execute some incidents (during #ChakkaJam), preventive detentions were made in public interest. Some people had reached Shaheedi Park. They were removed from the road so that traffic movement could resume: Delhi Police PRO

4:00 pm: No incidents took place in Delhi. Traffic movement is normal and the life is going on as usual here: Chinmoy Biswal, Delhi Police PRO

3:50 pm: Delhi: Internet services to remain suspended in Singhu, Ghazipur and Tikri, and their adjoining areas till 11:59 pm today "in the interest of maintaining public safety and averting public emergency".

3:45 pm: We have given time to the government till 2nd October to repeal the laws. After this, we will do further planning. We won't hold discussions with the government under pressure: Rakesh Tikait, Bharatiya Kisan Union

3:30 pm: We are in touch with farm leaders & have requested for smooth traffic flow. 'Chakka Jaam' will be for a limited time, so we will see there is no traffic hazard anywhere. Neither farmers nor commuters should be affected: Karnataka Home Minister Basavaraja Bommaih

3:15 pm: Haryana: Farmers blocking Palwal-Agra Highway at Atohan Chowk near Palwal as part of their country-wide 'Chakka Jaam' make way for an ambulance.

2:55 pm: Punjab: Protesters block roads as part of 'Chakka Jaam' call given by farmers from 12 pm to 3 pm today; visuals from Golden Gate on Delhi-Amritsar National Highway in Amritsar. 2:45 pm: Farmers are on streets for 71 days, they're struggling. On one hand, govt is ready for talks, while on other hand they're withdrawing water connection, electricity connection. They're harassing farmers, how can a democratic govt act like this?: KC Venugopal, Congress MP

2:35 pm: Delhi: Personnel of Security Forces including that of Rapid Action Force deployed at Ghazipur border (Delhi-Uttar Pradesh). Around 50,000 personnel of Delhi Police, Paramilitary & Reserve Forces have been deployed in Delhi-NCR region, as per Delhi Police. 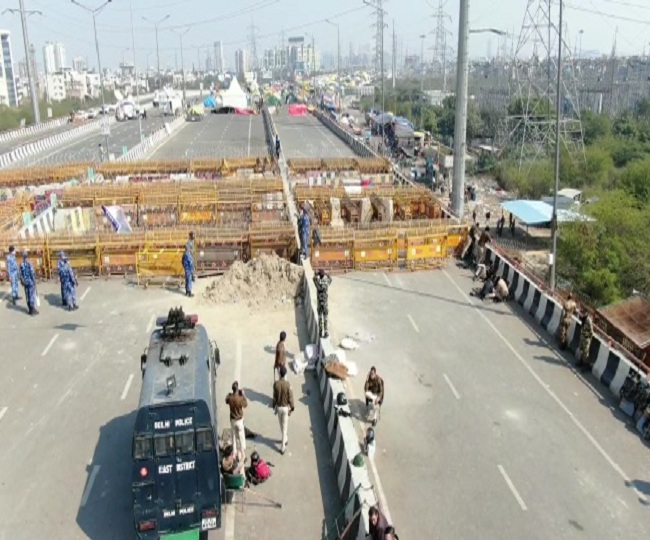 2:10 pm: Telangana: Police removed the protesters who were agitating on a highway on the outskirts of Hyderabad as part of the countrywide 'chakka jaam' called by farmers today. 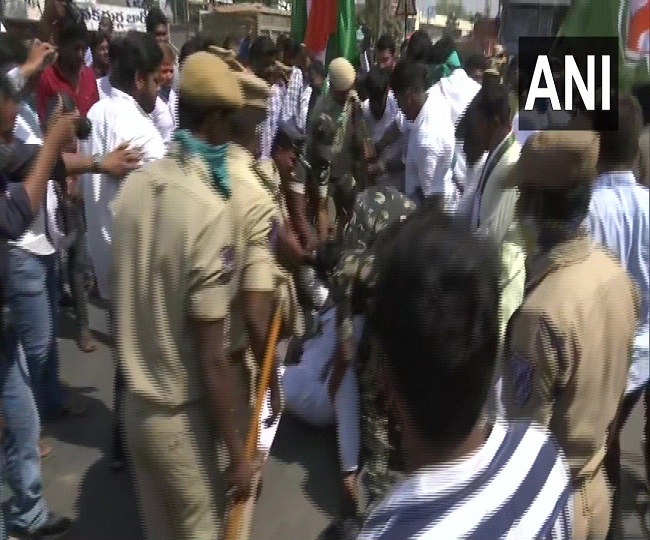 1:25 pm: Delhi: Police detain the protesters in Shahidi Park area who were protesting against farm laws as part of the countrywide 'chakka jaam' called by farmers today 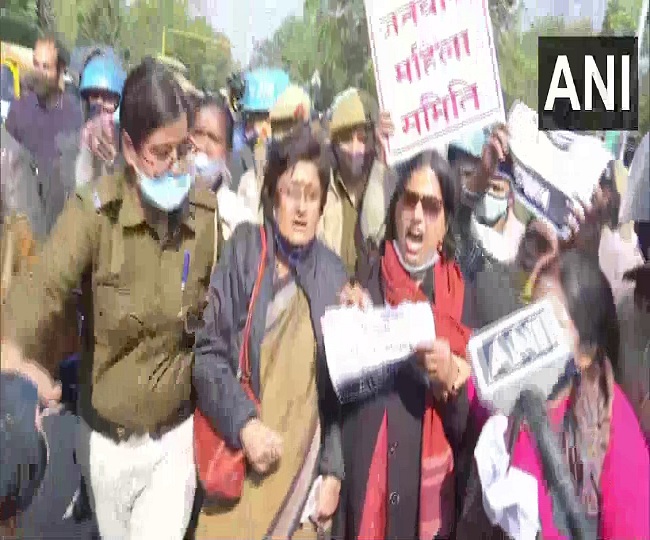 1:05 pm: Haryana: Protests being held at Atohan Chowk near Palwal as part of countrywide 'Chakka Jaam' call given by farmers. 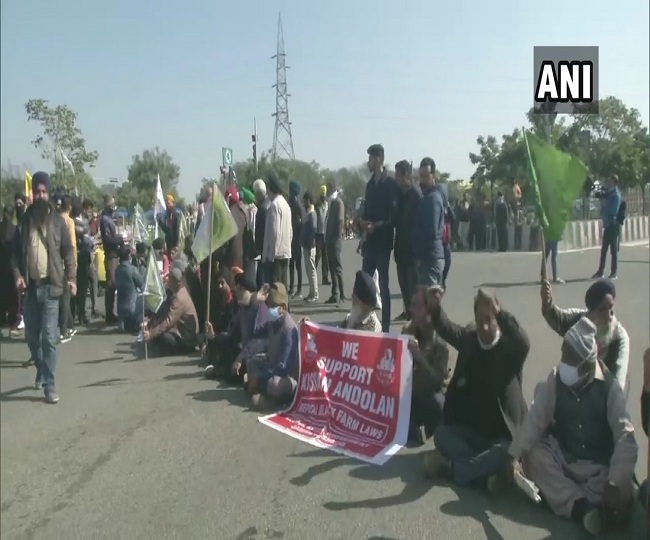 12:58 pm: J&K: Farmer organisations in Jammu stage protest on Jammu-Pathankot highway as part of the nationwide 'chakka jaam' called by farmers today. "We appeal to the govt to repeal these laws. We support the farmers protesting on the borders of Delhi," says a protester 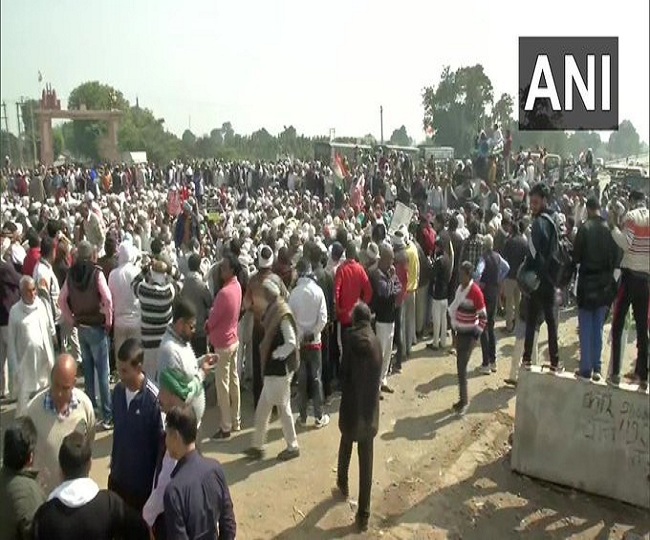 12:50 pm: UP Police & administration have maintained security since farmers' protest began. We've got support from farmer organisations, with their cooperation & our effort no untoward incident has happened so far. Today also we've deployed adequate security force: UP ADG, Law & order

12:45 pm: I appeal to all those protesting against farm laws to come to the streets and join today's 'dharna' between 12 pm and 3 pm: Congress leader Digvijaya Singh in Gwalior, Madhya Pradesh

12:30 pm: Bengaluru: Police detain the protesters who were agitating outside Yelahanka Police Station against the farm laws as part of the countrywide 'chakka jaam' called by farmers today.

12:15 pm: Punjab: Protesters block roads as part of 'Chakka Jaam' call given by farmers from 12 pm to 3 pm today; visuals from Amritsar and Mohali 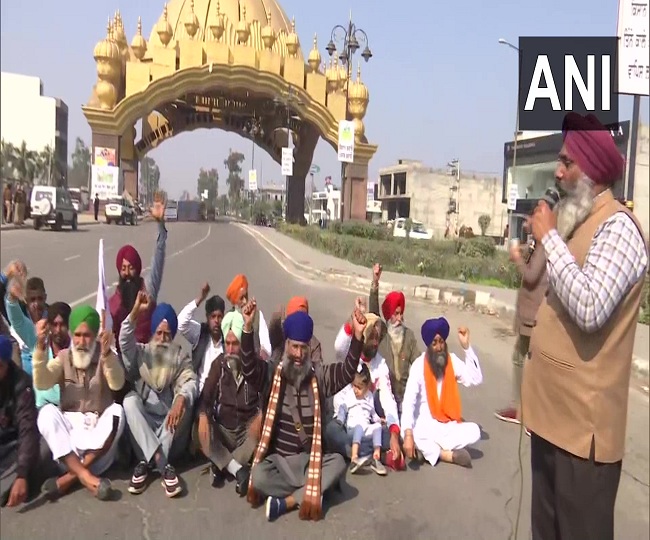 12:00 pm: Protesters block national highway near Shahjahanpur border (Rajasthan-Haryana), as part of 'Chakka Jaam' call given by farmers from 12 pm to 3:00 pm today. 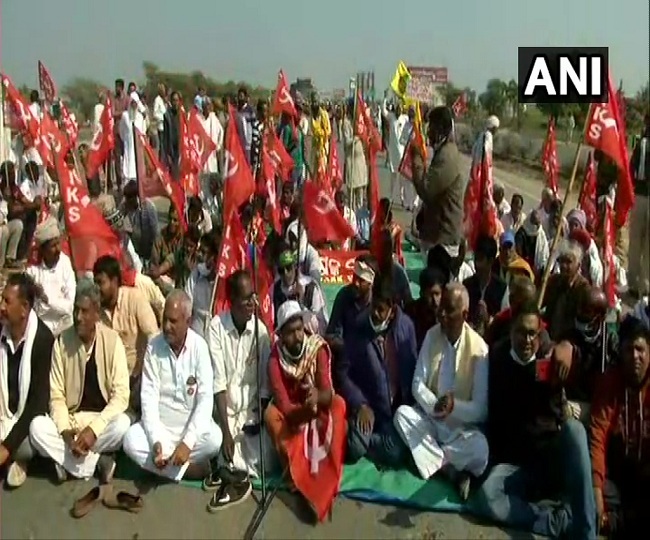 11:45 am: Entry/exit gates of Khan Market and Nehru Place are closed: DMRC

11:30 am: Police personnel are deployed at strategic locations such as Road number 56, NH-24, Vikas Marg, GT Road, Jirabad Road, since it's a call for nation-wide 'chakka-jam'. Barricading has been done in a way that there is no intrusion in Delhi: Alok Kumar, Joint CP, Delhi Police

11:15 am: The arrangements have been strengthened since January 26 to avoid any law and order situation. We are hoping that it will be a peaceful situation. Drones have been arranged for an aerial view, CCTV cameras have been installed in sensitive areas: Alok Kumar, Joint CP, Delhi Police

10:55 am: Govt. of India has a misunderstanding that only Punjab is agitating. The entire country is protesting, farmers from all states are sitting at protest sites. If they still want to turn a blind eye claiming only Punjab is protesting, then one can't do anything: Harsimrat Kaur Badal, SAD

10:10 am: It's CM Amarinder Singh's responsibility to go to Delhi & ensure that cases registered against innocent youths of Punjab are withdrawn. They've been imprisoned without any FIR. It's Punjab govt's responsibility to help them, what're they doing?: Harsimrat Kaur Badal, SAD

#WATCH I Delhi: Drone cameras deployed in the national capital to monitor the situation in the wake of 'Chakka Jaam' call by farmers; visuals from Tikri border. pic.twitter.com/fQNfd0CNN3

9:15 am: Security tightened in Delhi-NCR in view of 'Chakka Jaam' call by farmers; visuals from Loni border (Ghaziabad) where drone is being used to monitor the situation. Around 50,000 personnel of Delhi Police, Paramilitary & Reserve Forces deployed in Delhi-NCR, as per Delhi Police 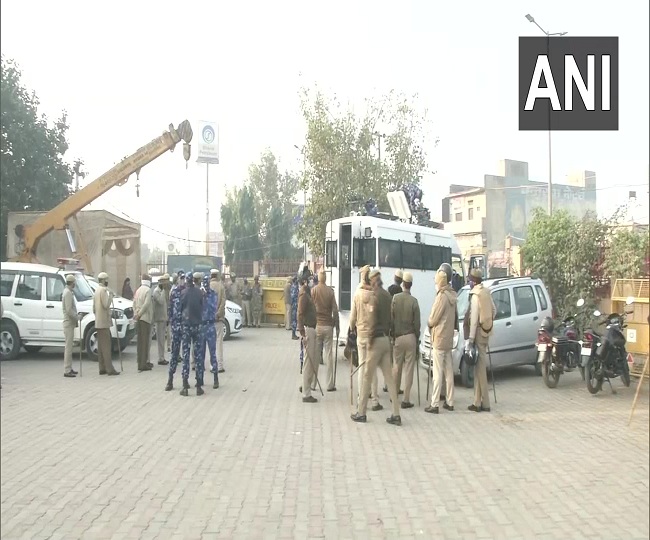 8:45 am: Around 50,000 personnel of Delhi Police, Paramilitary & Reserve Forces deployed in Delhi-NCR region. At least 12 metro stations in the national capital have been put on alert for closing the entry & exit, in view of any disturbance: Delhi Police

8:30 am: To assist Delhi Police in maintaining law and order situation amid 'Chakka Jaam' call by farmers, Paramilitary Forces have been deployed at various parts of Delhi-NCR including borders. 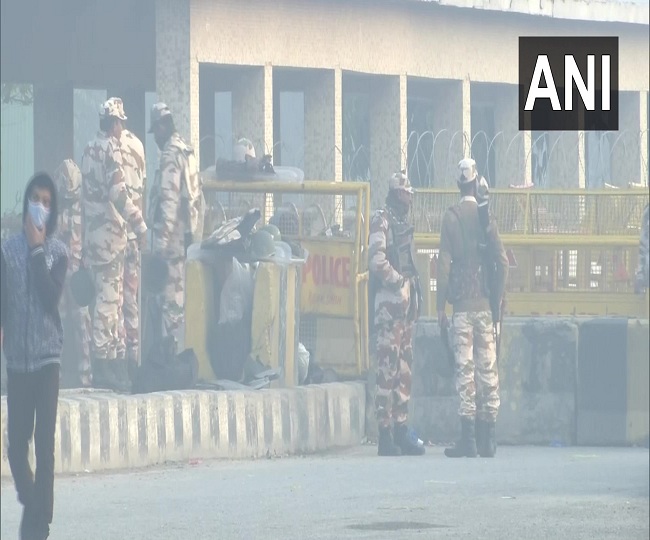 8:15 am: We call on authorities & protesters to exercise maximum restraint in ongoing #FarmersProtests. The rights to peaceful assembly & expression should be protected both offline & online. It's crucial to find equitable solutions with due respect to Human Rights for all:UN Human Rights

8:00 am: Delhi: Extensive barricading measures undertaken at Ghazipur border with water cannon vehicles deployed, as a preemptive measure to deal with possible disturbances resulting from 'Chakka Jaam' calls by farmer unions protesting farm laws. Visuals from the Delhi side of the border 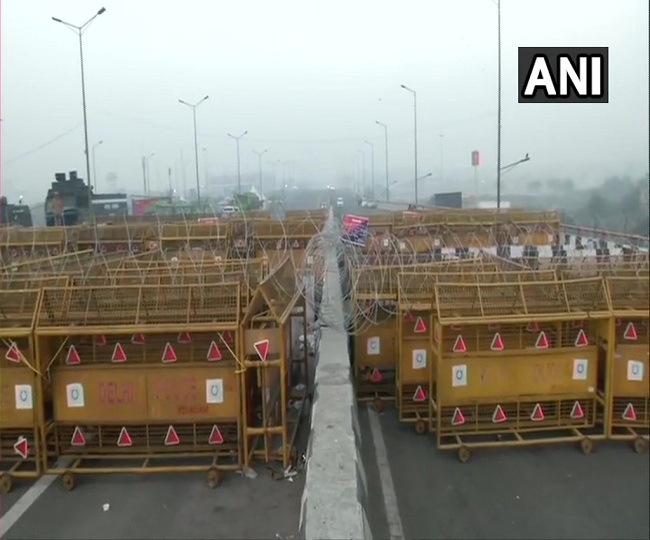 7:45 am: Delhi: Heavy deployment of police personnel at the Red Fort as a preventive measure to dispel actions resulting from calls for 'Chakka Jaam' by farmer unions protesting the farm laws 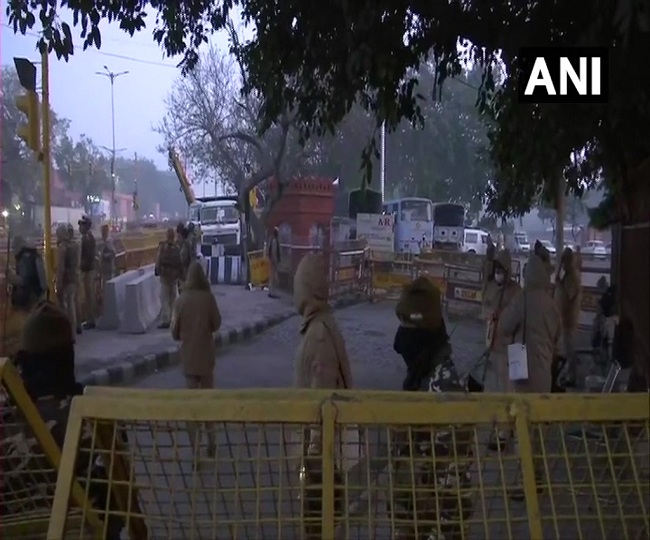 7:30 am: New Delhi: Security personnel deployed along with barricading measures at the Minto Bridge area. The area has been blockaded as a preemptory counter-measure to thwart 'Chakka Jaam' calls announced by farmer unions which are protesting the new farm law 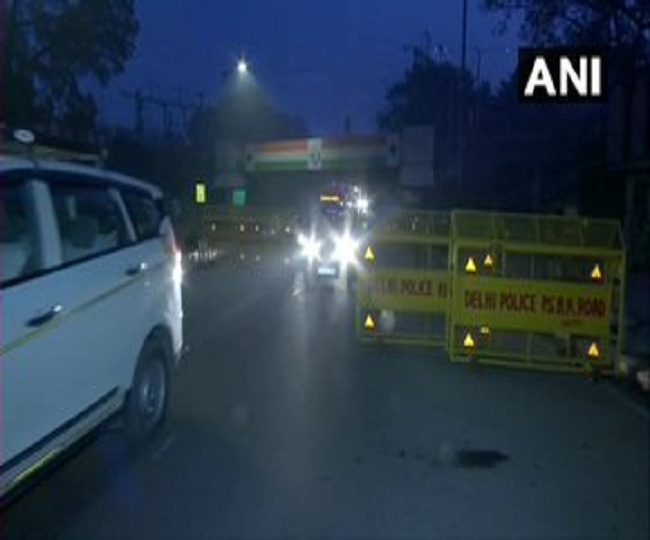 7:15 am: Delhi: Security tightened, in the light of 'Chakka Jaam' appeals by farmer unions protesting the farm laws. Visuals from the ITO area with barbed wires placed over police barricades 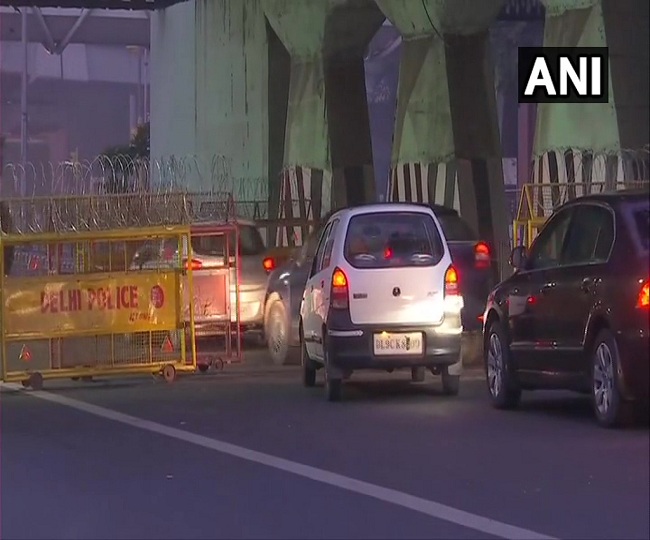 7:00 am: Protesters demonstrating against the farm laws continue their agitation at the Ghazipur(Delhi-UP) border.

The protesting farmers announced a chakka jam today across the country in a peaceful way to mark their protest against the Internet ban in areas near their agitation sites, harassment allegedly meted out to them by authorities and other issues. However, there will no road blockade in Uttar Pradesh and Uttarakhand on Saturday, but added that farmers in these two states can be called to the national capital any time and that they have been kept on standby.