Farmers' Protest: Next meet on Jan 19 as 9th round of talks ends without any outcome; stalemate continues | Highlights

Farmers' Protest: Ahead of the talks, Agricultural Minister Narendra Singh Tomar has expressed hopes of a positive outcome, saying the Centre is "ready to hold talks with farmers' leaders with an open mind".

New Delhi | Jagran News Desk: Three central ministers and farmers unions on Friday committed to continuing holding direct talks to resolve the over-one-month-long deadlock over three agri laws, with Agriculture Minister Narendra Singh Tomar urging farmer leaders to be flexible in their approach as has been done by the government. The ninth round of talks between protesting farmer unions and three central ministers got underway here on Friday afternoon and discussions were held on all the three laws before the lunch break.

Besides Tomar, Railways, Commerce and Food Minister Piyush Goyal and Minister of State for Commerce Som Parkash are holding the talks with the representatives of around 40 farmer unions at the Vigyan Bhawan here.

Ahead of the commencement of the ninth round of talks between farmer leaders and the Centre here on Friday, farmer leader Rakesh Tikat warned that they would walk out of the meeting in case the government remained stuck on its earlier position on the three farm laws. On Thursday, Agriculture Minister had said that the government's ninth round of negotiations with protesting farmer unions would take place as scheduled and the Centre was hopeful of positive discussions.

5:30 pm: The government will present its side before the committee constituted by the Supreme Court when asked: Union Agriculture Minister Narendra Singh Tomar

5:25 pm: Today's talks with farmers unions were not decisive. We will hold talks again on 19th January. We are positive to reach a solution through talks. The government is concerned about the farmers protesting in cold conditions: Union Agriculture Minister Narendra Singh Tomar

5:20 pm: Our demands of repealing of the three farm laws & MSP guarantee remain. We will not go to the Committee constituted by the Supreme Court. We'll talk to Central Government only: Rakesh Tikait, BKU spokesperson 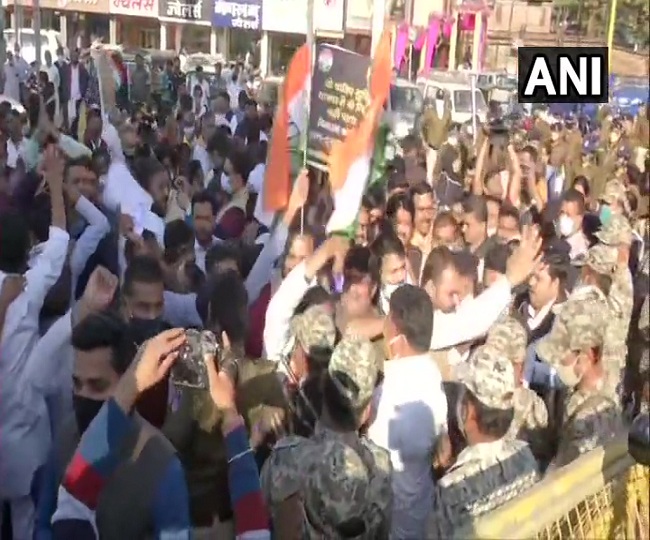 5:00 pm: The next round of talks between farmers and Central Government over the #FarmLaws, to be held on 19th January.

4:45 pm: The ninth round of talks between farmers and the Central Government concludes in Delhi.

4:15 pm: The ongoing meeting discussing three agricultural laws between Union Govt and farmers did not come to a resolution before the lunch break. The MSP Guarantee act will be discussed after the break.

#WATCH Chandigarh: Police used water cannon to stop the members and workers of Congress, who were marching to Punjab Raj Bhawan in protest against the three #FarmLaws by Central Government. They were later detained by Police. pic.twitter.com/HF4ADYwmUg

3:40 pm: Prime Minister Narendra Modi does not respect farmers and wants to tire out those protesting against the Centre's new agri laws, Congress leader Rahul Gandhi alleged on Friday. He also said that the talks that are being held with the protesting farmer leaders are part of the government's delaying tactics.

3:20 pm: Ahead of the ninth round of talks between the government officials and the farmers at Vigyan Bhavan here on Friday, the national spokesperson of Bhartiya Kisan Union (BKU) Rakesh Tikait on Friday said the farmers would withdraw the Republic Day tractor parade if the Supreme Court orders.

2:45 pm: The three (farm) laws have been brought to finish the farmers. If we don't stop this now, it will continue to happen in other sectors too. Narendra Modi does not respect the farmers. The farmers will neither deter nor fear: Congress leader Rahul Gandhi in Delhi

2:30 pm: Delhi: The talks between farmer leaders and the government at Vigyan Bhawan temporarily halted for the lunch break. 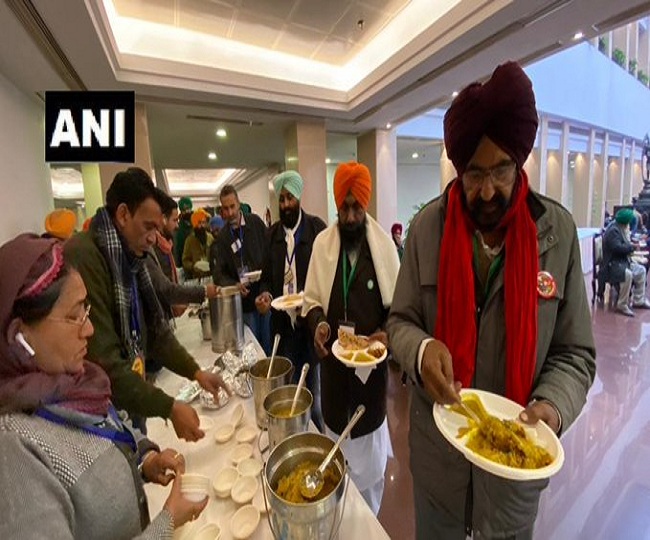 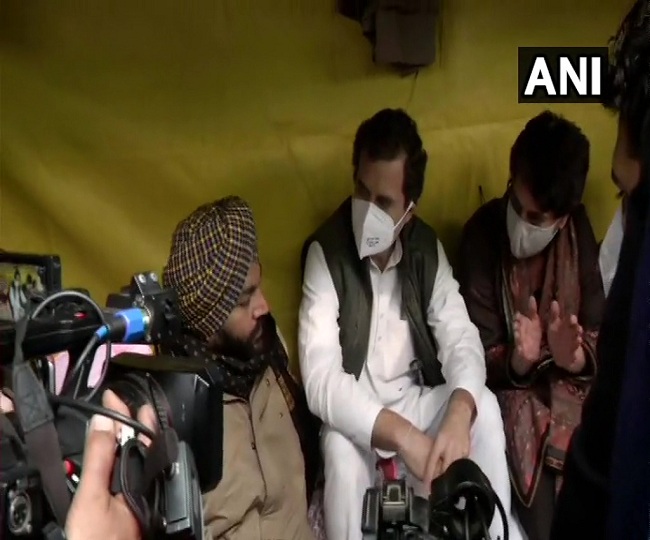 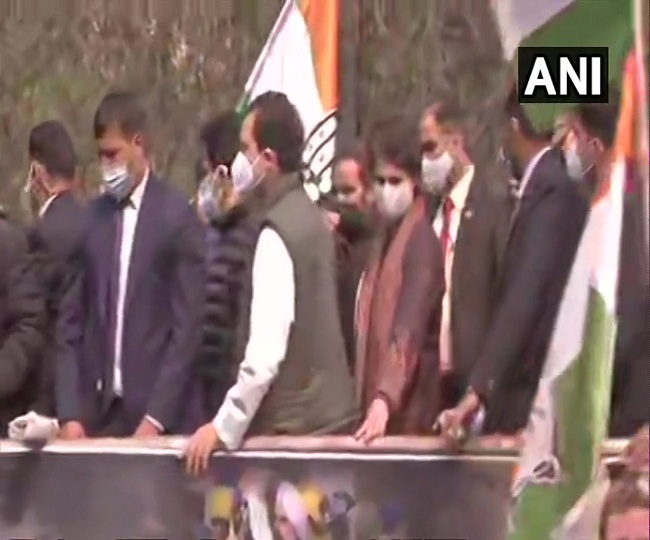 1:25 pm:  The ninth round of talks between protesting farmer unions and three central ministers got underway here on Friday afternoon to break the over-a-month-long deadlock on the three new agri laws.

1:00 pm: Ahead of farmers' 9th round of meeting with the government on Friday, Kailash Choudhary, Minister of State for Agriculture said the farmer unions should not be adamant and change their demand of repealing the farm laws. He asked the farmers not to boycott the Supreme Court-mandated committee.

12:30 pm: Ahead of the commencement of the ninth round of talks between farmer leaders and the Centre here on Friday, farmer leader Rakesh Tikat warned that they would walk out of the meeting in case the government remained stuck on its earlier position on the three farm laws

11:15 am: Government welcomes the Supreme Court order regarding the farmers' agitation. The government will put forth its views before the committee (appointed by the court). We are trying to resolve the issue through dialogue: Union Agriculture Minister Narendra Singh Tomar

10:45 am: We don't expect much, last round of talks with govt failed & now they've got the opportunity to get help from court. I think govt is not going to advance the discussions. There is no chance of further improvement on 3 farm laws: Hannah Mollah, General Secy, All India Kisan Sabha

10:30 am: Delhi: Farmer leaders reach Vigyan Bhawan to hold ninth rounds of talks with the Central government over the new farm laws. "Govt needs to devise a plan to scrap the three laws and give legal guarantee for MSP," says BKU Spokesperson Rakesh Tikait. 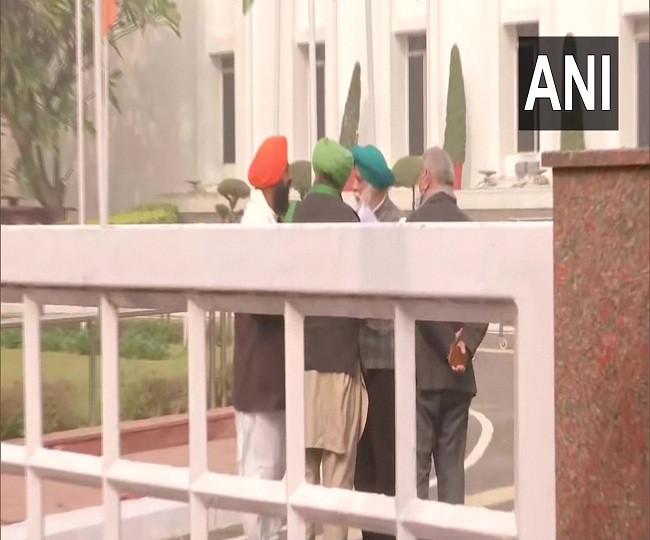 9:55 am: Protesting farmer leaders on Thursday said they will attend the ninth round of talks with the government amid indication that it may be last such meeting with the Centre, but added that they don't have much hope as they will not settle for anything less than the repeal of the contentious farm laws.

9:40 am: The Supreme Court-appointed panel on farm laws is likely to hold its first meeting on January 19 at Pusa campus here, one of its members Anil Ghanwat said on Thursday and asserted the committee will have no "ego or prestige issue" if it has to go to farmers' protest sites to talk to them.

9:30 am: Protesting farmers will take out a procession from Red Fort to India Gate and hoist the national flag at Amar Jawan Jyoti on Republic Day, said the Bharatiya Kisan Union (BKU).

9:15 am: Eight rounds of talks have been held between the protesting farmers and government over their demand for the repeal of new farm laws, but no outcome has been reached yet. Today, both the parties will hold a ninth round of talks to resolve the issue.

9:00 am: Farmers have been protesting on the different borders of the national capital since November 26 against the three newly enacted farm laws - Farmers' Produce Trade and Commerce (Promotion and Facilitation) Act, 2020; the Farmers Empowerment and Protection) Agreement on Price Assurance and farm Services Act 2020 and the Essential Commodities (Amendment) Act, 2020.

8:45 am: The Supreme Court had on Tuesday stayed the implementation of three farms laws until further orders and formed a four-member committee.

8:30 am: Krantikari Kisan Union chief Darshan Pal on Thursday said that they will take part in the scheduled meeting with the central government on Friday concerning their demands on new farm laws. He said they will decide on their next course of action on the government's response.

8:15 am: Members of the committee appointed by the Supreme Court to resolve farm laws deadlock should follow the suit of Bhupinder Singh Mann and not be on the "wrong side of history", a farmers' union said here on Thursday.

8:00 am: The IMF believes the farm bills passed by the Indian government have the potential to represent a significant step forward for agricultural reforms, but a social safety net is needed to protect those who might be adversely impacted during the transition to the new system, a spokesperson of the global lender said here.

7:45 am: The central government and the farmer unions will hold the ninth round of talks today.