Farmers' Protest Highlights: With stir against the three agri-marketing legislations entering the second month, Delhi Chief Minister Arvind Kejriwal visited the Singhu protest site for the second time on Sunday and urged the Central government to repeal the laws.

New Delhi | Jagran News Desk: With stir against the three agri-marketing legislations entering the second month, Delhi Chief Minister Arvind Kejriwal visited the Singhu protest site for the second time on Sunday and urged the Central government to repeal the laws. Addressing the agitating farmers, Kejriwal threw an open challenge to ministers at the Central government to debate the laws in public with the protesters.

Defence Minister Rajnath Singh on Sunday assured the protesting farmers that minimum support price (MSP) and APMCs will continue and said that no "Mai ka Lal" can snatch their lands. This comes a day after the farmer unions have accepted the government's proposal for talks and have proposed December 29 as the next date. Though the farmers have agreed for the talks, they have warned that they will hold a tractor march on December 30 at the Delhi-Singhu if the government fails to hold talks on repealing the new agricultural laws. Amid this, Union Minister of State for Agricultural and Farmers' Welfare Kailash Chaudhary said that talks scheduled on December 29 will resolve issues "if they're conducted from farmers' perspective, not from the perspective of politicians".

Here are the highlights from farmers' protest:

19:00: I challenge those from the Central government who know the most about the farm laws to debate with the farmer leaders in public. They say that farmers do not know enough, it will be proven who knows more: Kejriwal

18:40: Our farmers are forced to sleep on streets in open amid cold since last 32 days. Why? It pains me that over 40 people have lost their lives here. I appeal to the Centre to listen to them and repeal the Farm Laws: Delhi CM Arvind Kejriwal

18:40: Our CM has been working 24 hours to make efforts to reduce the troubles faced by the farmers. Despite all the pressure, the stadiums weren't converted into prisons. It would have been a black spot in history if we had done that: Delhi Dy CM Manish Sisodia, at the Singhu border

17:02 pm: Recap: 'No democracy in India, it's only in imagination': Rahul Gandhi after meeting President over agri laws

"Any mishandling of this issue takes place in Delhi, either through misdirected action or bad policy then don’t blame Punjab Police or Punjab government for the aftermath it may lead to. Punjab Police is doing a commendable job. We have always stood for peace and peaceful protests," he said in a tweet.

15:41 pm: Problems can only be resolved by talking. I firmly believe talks scheduled on December 29 will resolve issues if they're conducted from farmers' perspective, not from perspective of politicians who're politicising the issue: Union Minister of State for Agriculture and Farmers' Welfare Kailash Chaudhary

15:34 pm: It's unfortunate that those who don't even know about farming, are misleading innocent farmers. This government never intended to stop MSP, neither it will in future. Mandis will also be maintained. No 'Mai Ka Lal' (mother's son) can take away land from farmers, says Rajnath Singh.

15:05 pm: The income of farmers will double with the enactment of farm laws. It takes some time to see the impact of comprehensive reforms. I appeal to farmers to see changes in the next one and a half years. Otherwise, we can improve them (laws) through talks: Union Minister Rajnath Singh

14:54 pm: Kerala Finance Minister Thomas Isaac says, "why doesn’t Kerala have Mandi system? Elementary bakht -more than 80 per cent of our cropped area are under commercial crops for which there are separate Commodity Boards with independent marketing regulations. (Coconut exempted.) Yet we intervened with MSP to protect the farmers".

"I congratulate Hanuman Beniwal ji of RLP for following in the footsteps of Akali Dal by quitting NDA to stand in solidarity with farmers. RLP has sent a strong msg that those parties who are pro-farmers and respect 'annadata' are ready to sacrifice everything for our peasantry," she tweeted.

12:56 pm: "Farmers will respond to government after they send us a proposal. If the PM is saying laws are good, he has already given an impression that the government is not going to change their stance. A bigger stage has been set at the protest site for long haul since number of protesters are growing," says farmer leader Sarwan Singh Pandher. 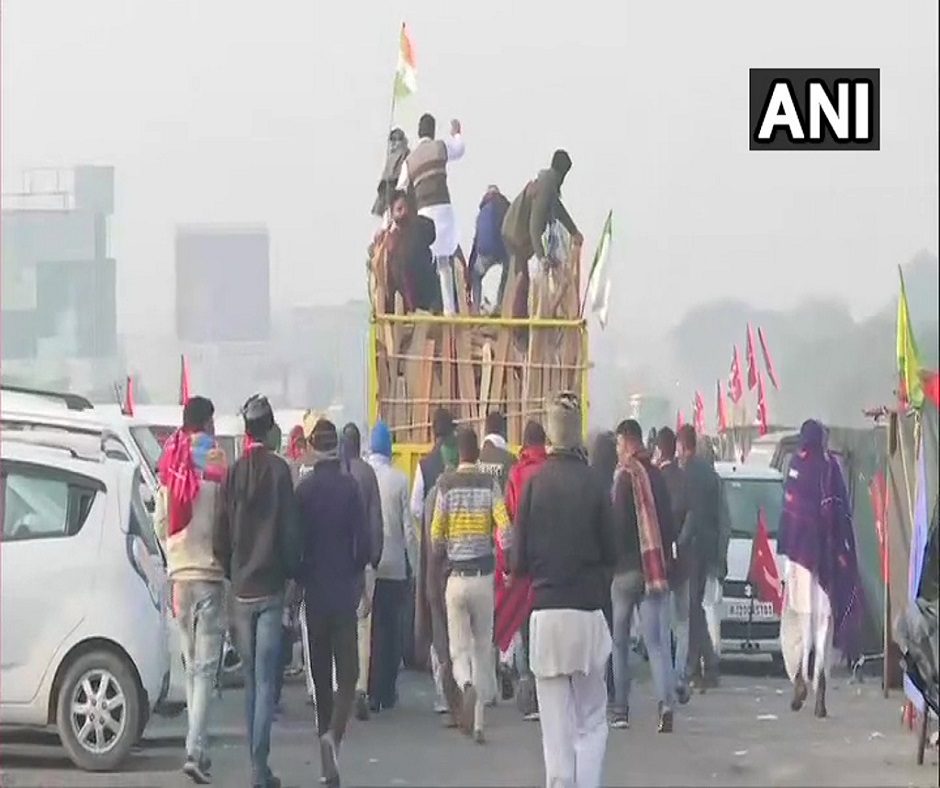 11:52 am: According to a media report, Delhi Chief Minister Arvind Kejriwal will visit farmers protesting at the Singhu Border today around 6 pm.

11:38 am: People reverently remember the supreme sacrifice of the family of Sri Guru Gobind Singh Ji. This martyrdom gave a new lesson to the entire humanity and the entire country. This martyrdom did a great work of protecting our civilization. We are indebted to this martyrdom: PM Modi during Mann Ki Baat

"Since we've been sitting idle for a month during protests, we thought of growing onions as we can use it for our daily cooking. We'll grow more crops on Burari ground," says a farmer. 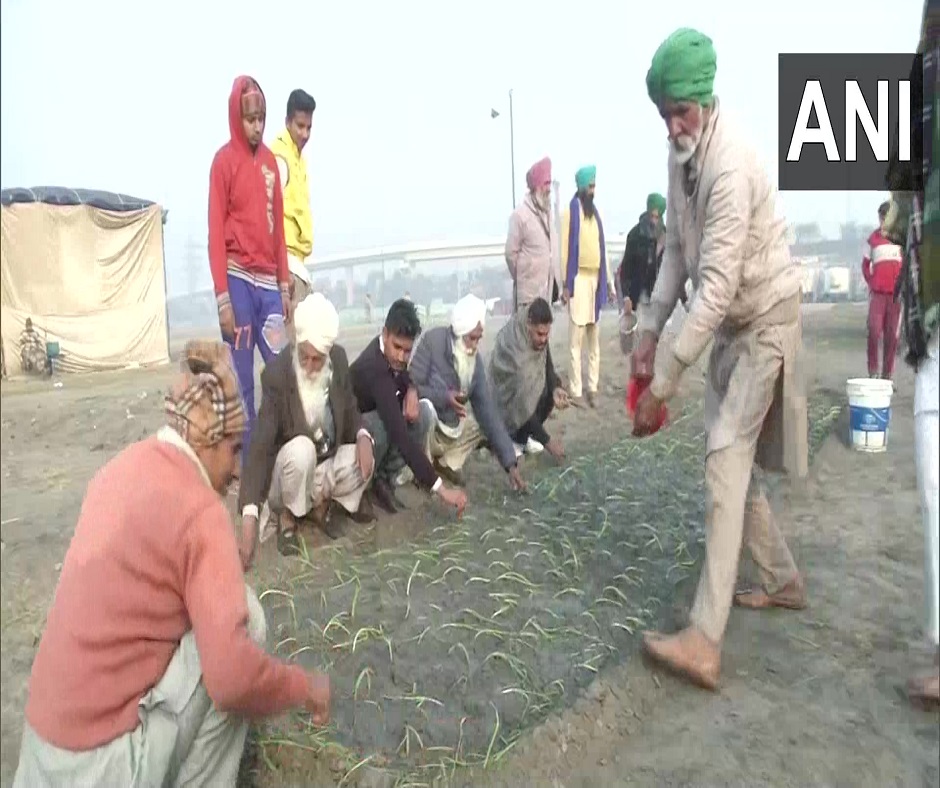 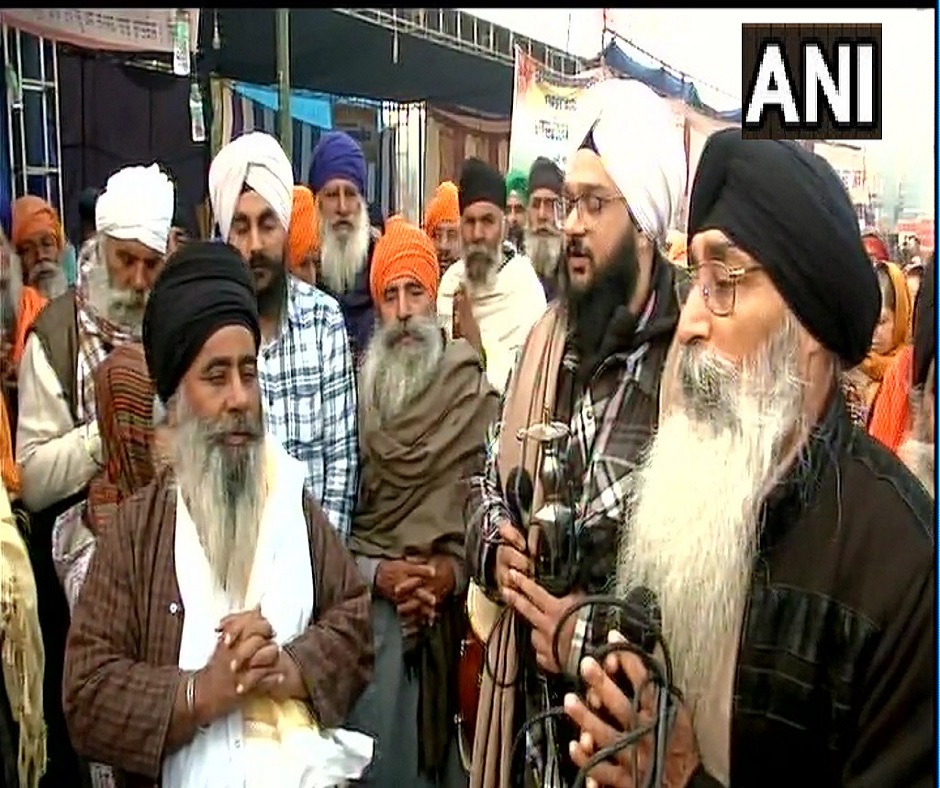 9:12 am: According to a report by News18, couple of farmers were killed in the last 24 hours at the Tikri-Bahadurgarh Border due to the extreme cold and weather.

9:09 am: Meanwhile, the Yogi Adityanath-led BJP government in UP has beefed-up the security along the borders of Delhi in wake of the farmers' protest.

9:05 am: Meanwhile, Rashtriya Loktantrik Party has quit from the BJP-led NDA alliance over farm laws. It has now become the second BJP ally after Akali Dal to leave the NDA over the farm laws.

"I have left the NDA in protest against the three farm laws. These laws are anti-farmer. I have left NDA but won't forge alliance with the Congress," said RLP chief Hanuman Beniwal.

8:25 am: Though the government has not responded to the proposal, media reports suggest that the Centre has accepted the farmers' suggestion to hold talks on December 29.

8:20 am: The farmers, however, have warned that they will hold a tractor march at the Delhi-Singhu border on December 30 if the Centre does not talk of repealing the farm laws during the talks on Tuesday.

8:15 am: The farmers have accepted government's proposal for talks and have proposed December 29 as the next date to hold discussions.