Farmers' Protest: Govt-farmers meeting concludes as Agriculture Minister assures no change in MSP, next round on Dec 5 | As it happened

Farmers' Protest: Union Agriculture Minister Narendra Singh Tomar on Thursday assured farmers protesting against the agri-marketing legislators that the centre will not make any changes in the Minimum Support Price.

New Delhi | Jagran News Desk: Union Agriculture Minister Narendra Singh Tomar on Thursday assured farmers protesting against the agri-marketing legislators that the centre will not make any changes in the Minimum Support Price. The discussion in this regard was held during the fourth round of talks between the representatives of protesting farmers and the central government. The fifth round will be held on December 5.

"People have reservations on MSP. I would like to reiterate that the MSP system will continue and we will assure farmers about it," Tomar told media after the talks, as reported by news agency ANI.

During the meeting, the farmer leaders suggested the government that a special session of the Parliament be called and the new farm laws be abolished.

8:30 pm: Harjinder Singh Tanda from the Azaad Kisan Sangharsh Committee told media after the meeting that the talks have made a little progress and should be concluded on December 5.

"Talks have made little progress. In the half time it seemed that today's meeting would yield no result. In the second half, it seemed that there is pressure on farmers agitation on the government. Talks were held in a conductive atmosphere,' Tanda said, adding, "We are hopeful. Laws are wrong. In the next meeting, we will put pressure on the government. They will have to say that they will take back the laws. In my opinion, it will be finalised in the meeting day after tomorrow."

8:00 pm: Agriculture Minister Narendra Singh Tomar said that during the meeting, the farmers also expressed their concerns over an Ordinance on stubble burning and the Act on electricity. He said the government is open to consider and discuss these issues with the farmers as well.

7:45 pm: The meeting of farmer leaders with the central government has concluded. Next meeting will be held on December 5

7:20 pm: Minimum Suppor Price for crops will not be changed, Union Agriculture Minister Narendra Singh Tomar said in his reply to farmer unions' leaders at the Vigyan Bhawan meeting.

7:00 pm: Farmer leaders who attended the Vigyan Bhawan meeting have suggested the government that a special session of the parliament be called and the new farm laws be abolished.

6:31 pm: Nihang Sikhs have reached Singhu border to support the farmers protesting against Central Government's farm laws. They said they stand with the farmers and will continue to remain at the border until the central government rolls back the farm laws.

17:38 pm: The farmers on Thursday put five-point set of demands, one of the key demands is the repeal of three contentious farm laws passed in September during the Monsoon Session of Parliament. It also raises objections about the upcoming Electricity (Amendment) Act, 2020.

16:31 pm: Madhya Pradesh Chief Minister Shivraj Singh Chouhan says "Congress has always opposed farmers. They're distressed, they're looking for some chaos. It was the same Congress that instigated farmers in Neemuch and Mandsaur and fanned violence. We will not let Congress do this at any cost in Madhya Pradesh".

16:09 pm: All India Power Engineers Federation (AIPEF) on Thursday said that it fully supports farmers' protest against the farm acts and has urged the Centre to scrap the laws immediately.

16:07 pm: Adhir Ranjan ji's demand for winter session of Parliament is valid. Not holding session and evading questions isn't right for democracy. Opposition and farmers are demanding that even it's for 2 days, Parliament session should be held, says Maharashtra Minister and NCP leader Nawab Malik.

15:45 pm: Parkash Singh Badal (former Punjab CM) fought for farmers for his entire life. He returned his award to send a strong message to the government. Farmers don't need these laws so why the Govt of India is forcing them on farmers?, says Shiromani Akali Dal chief Sukhbir Badal.

15:22 pm: Odisha: Members of All India Kisan Sangharsh Coordination Committee protest in front of the state assembly in Bhubaneswar in support of farmers' protests in Delhi. "We want Centre to withdraw Farm laws that can destroy farmers and agriculture," says Farmers Leader Praful Samantaray. 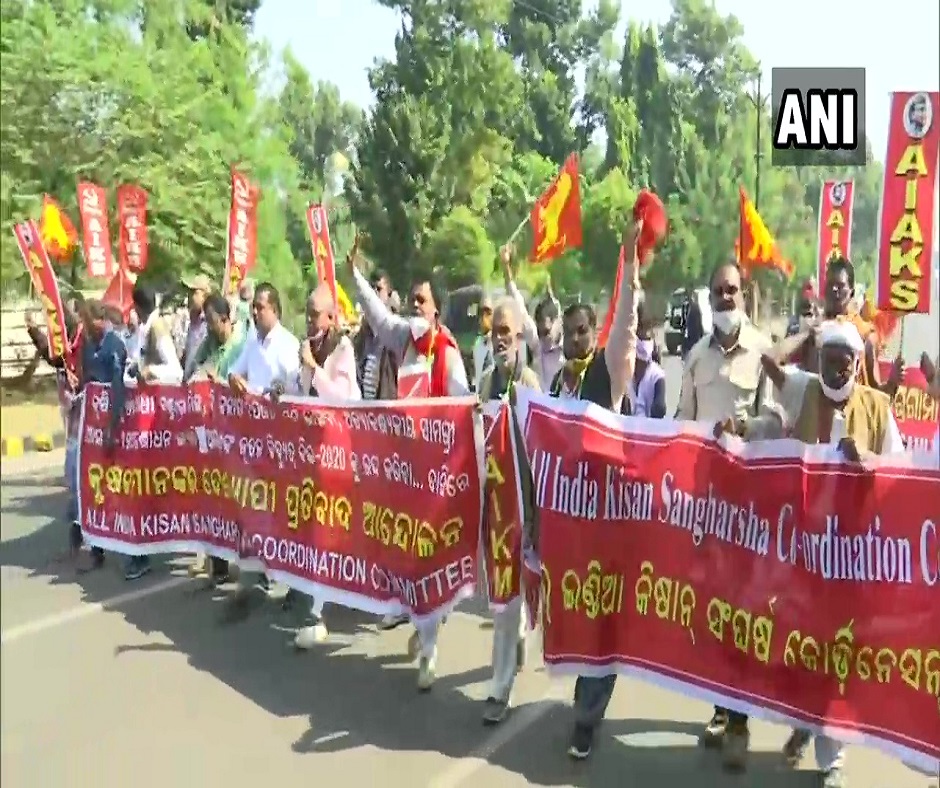 13:54 pm: Punjab CM stressing the need to protect MSP and continue with the APMC based Mandi system, urged Home Minister to listen to the farmers with an open mind to resolve the standoff quickly so that farmers can return to their homes: Chief Minister's Office after Singh's meeting with Shah

In a series of tweets, she said, "I am very much concerned about the farmers, their lives and livelihood. GOI must withdraw the anti-farmer bills. If they do not do so immediately, we will agitate throughout the state and the country. From the very start, we have been strongly opposing these anti-farmer bills. We have called a meeting of the All India Trinamool Congress on Friday, December 4. We will discuss how the Essential Commodities Act is impacting common people and resulting in skyrocketing prices. The central government must withdraw this anti-people law".

13:18 pm: Bhim Army Chief Chandra Shekhar meets protesting farmers at Singhu border. "If government becomes dictator then people should come out on the streets. Government should stop shaming this movement. We're here to support our farmers and will stand by them till the end," he said.

13:12 pm: Just In: Maharashtra Congress passes a resolution to support the farmers protesting in Delhi against Centre's farm laws

12:45 pm: Discussion is going on between farmers and Centre, there's nothing for me to resolve. I reiterated my opposition in my meeting with Home Minister and requested him to resolve the issue as it affects the economy of my state and security of the nation: Punjab CM Captain Amarinder Singh

11:48 am: 40 farmer leaders are present at Vigyan Bhawan for talks with the government on farm laws.

11:45 am The farmers have arrived at Vigyan Bhawan for their meeting with the government. 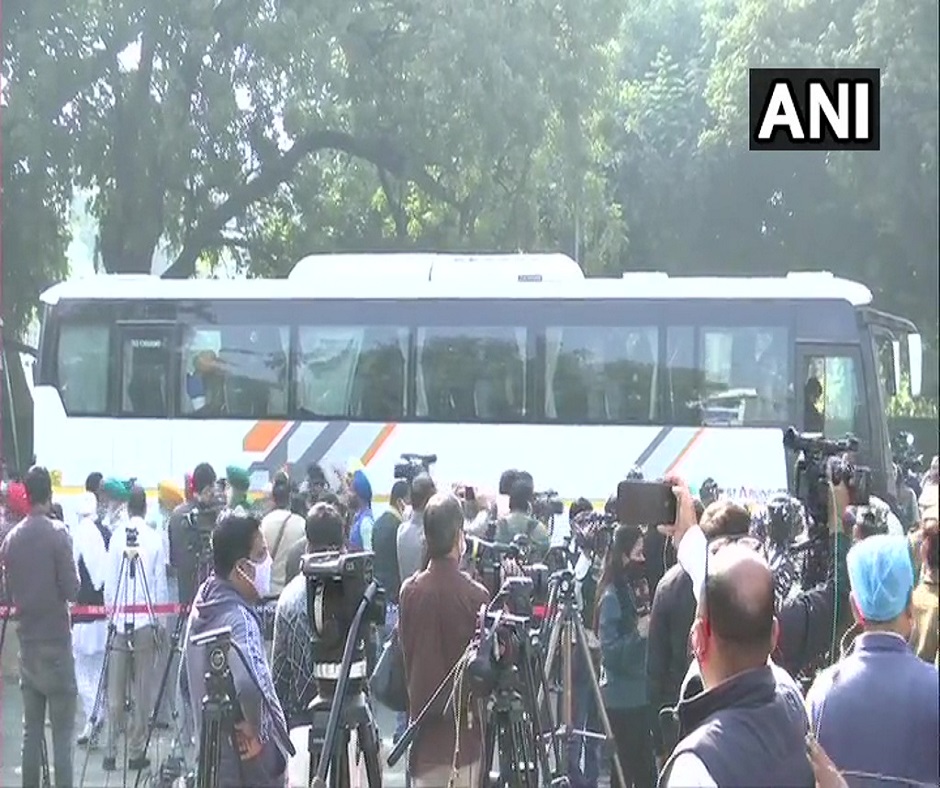 11:10 am: We are talking to the farmers to end the blockade here as this is a major route to Delhi. We are hopeful that the roadway will be opened soon, says Abhishek Verma, SP City at Delhi-Ghazipur border

10:50 am: Noida: Slow traffic movement seen on a road near Sector 16 amidst blockades in wake of farmers protest. 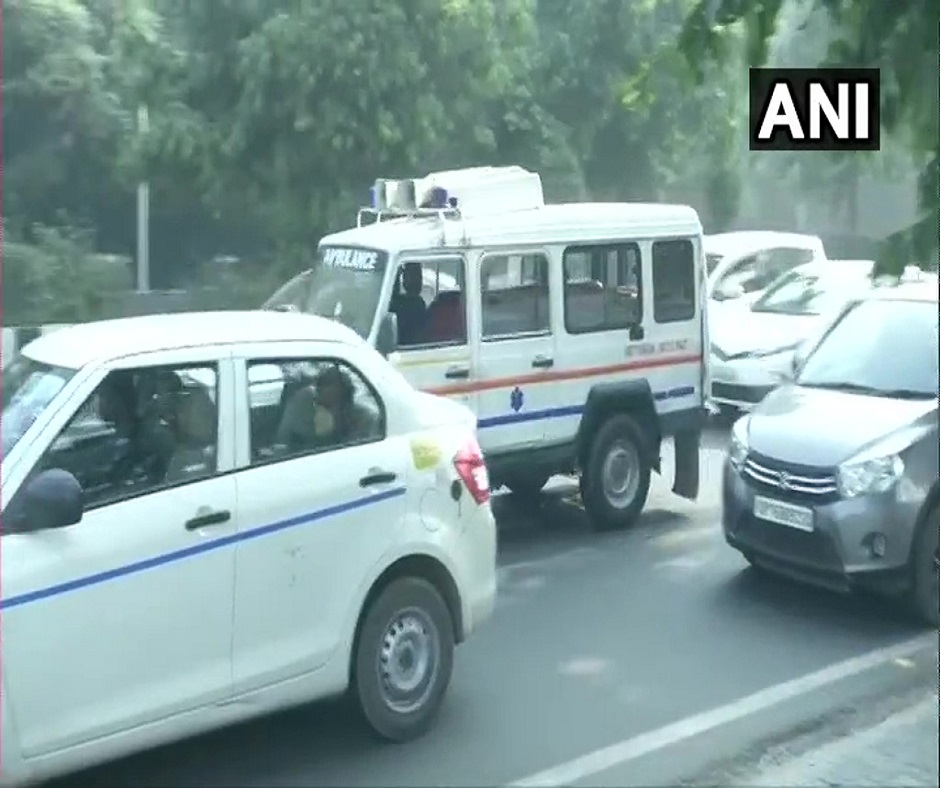 10:49 am: Just In: Union Agriculture Minister Narendra Singh Tomar has left from his house. He will meet farmer leaders later today.

10:16 am: Deeply anguished at the death of Gurjant Singh and Gurbachan Singh, farmers from Mansa and Moga respectively during their participation in the protests at Delhi. The government will provide full monetary and other assistance to their families, says Punjab CM Captain Amarinder Singh

10:15 am: We are hopeful that the meeting will be successful. The aim of holding a dialogue is to find a solution, says Som Prakash, Minister of State for Commerce and Industry

The Government will hold point by point discussion with the farmers to reach a solution. Govt will hold talks with farmers with an open heart in the interest of the nation, he added.

10:00 am: Meanwhile, traffic snarls at Delhi borders are leading to chaos once again. Thousands of commuters are left stranded at key entrances to Delhi for hours.

9:57 am: Farmers' leaders depart from Singhu border for their meeting the government on farm laws. "35 leaders are going to meet the government. We are educated farmers, we know what is good for us. We want these laws to be withdrawn," says a farmer. 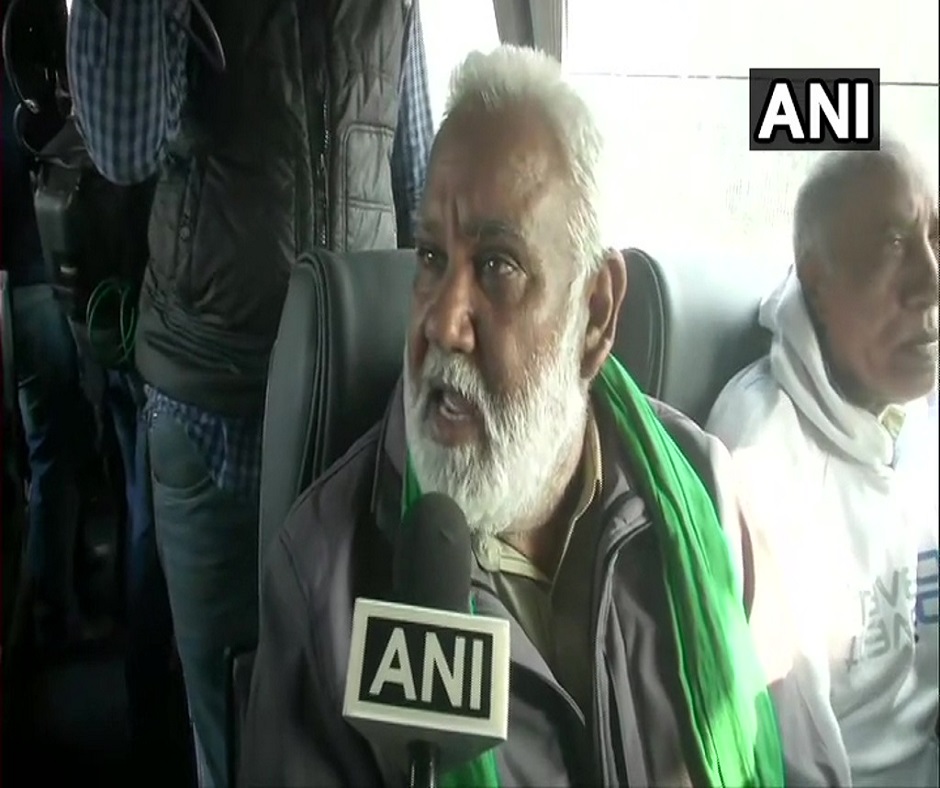 9:19 am: The Centre is trying to divide the farmers. We won't attend any meeting called by the government until PM Modi doesn't hold a meeting with leaders of all 507 farmers' unions, says SS Subhran, Joint Secy, Kisan Mazdoor Sangharsh Committee, Punjab, at Singhu border. 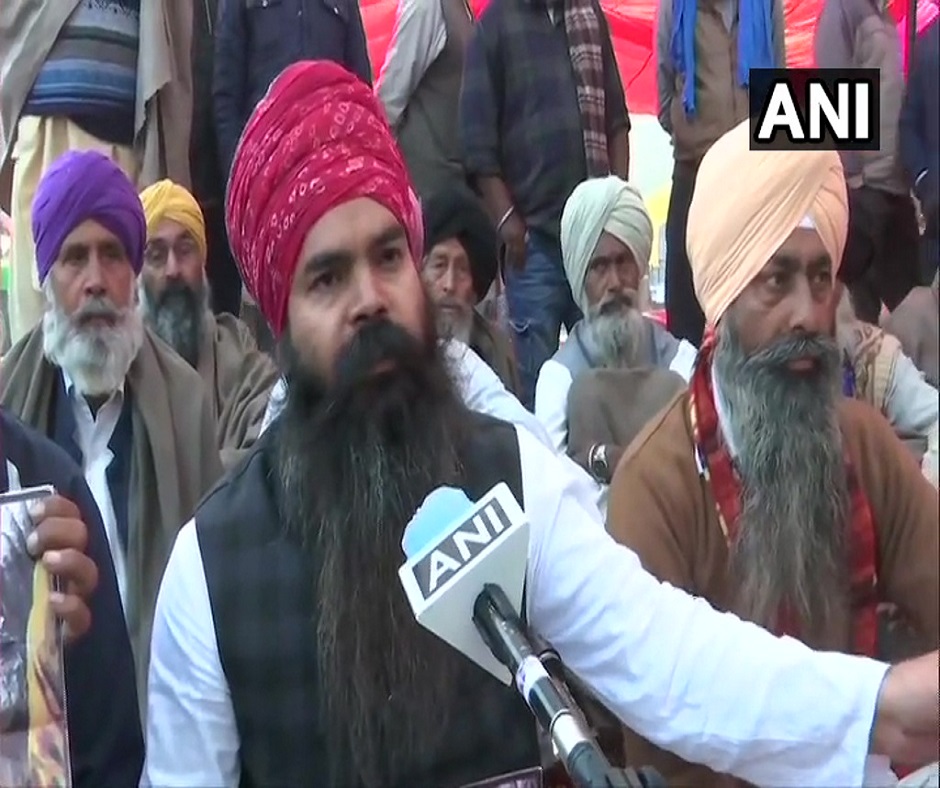 8:28 am: Volunteers from a gurudwara in Ghaziabad distribute tea to protesting farmers at Delhi-Ghazipur border. 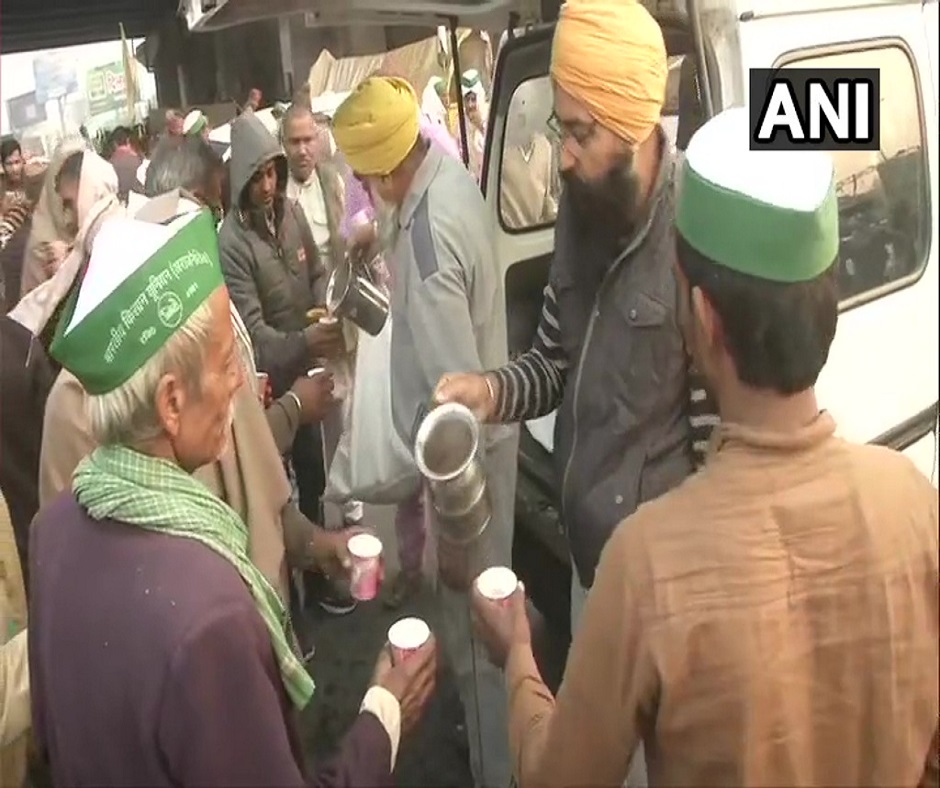 8:25 am: The chilla border on Noida link road is closed for traffic due to farmers protests near Gautam Budh Dwar. Tikri border, Jharoda Border, Jhatikra Border are closed for any Traffic Movement. Badusarai Border is open only for two-wheeler traffic: Delhi Traffic Police