Raj Kundra Arrest: Shilpa Shetty said that she and her husband do not "deserve a media trial". She also appealed to everyone to stop attributing false quotes on her behalf.

New Delhi | Jagran News Desk: Bollywood actress Shilpa Shetty, whose husband -- Raj Kundra -- has been arrested in connection with the alleged pornography case, on Monday issued a statement, saying she has not commented over the issue and "would continue to refrain from doing so as the matter is subjudice".

Noting that she has full faith in the Mumbai Police and judiciary, the Bollywood actress said that she and her husband do not "deserve a media trial". She also appealed to everyone to stop attributing false quotes on her behalf.

"Yes! The past few days have been challenging, on every front. There have been a lot of rumours and accusations. A lot of unwarranted aspersions on me cast by the media and (not so) well wishers as well," she said.

"As a family, we are taking recourse to all our available legal remedies. But, till then I humbly request you - especially as a MOTHER - to respect our privacy for my children’s sake and request you to refrain from commenting on half-baked information without verifying the veracity of the same," she added. 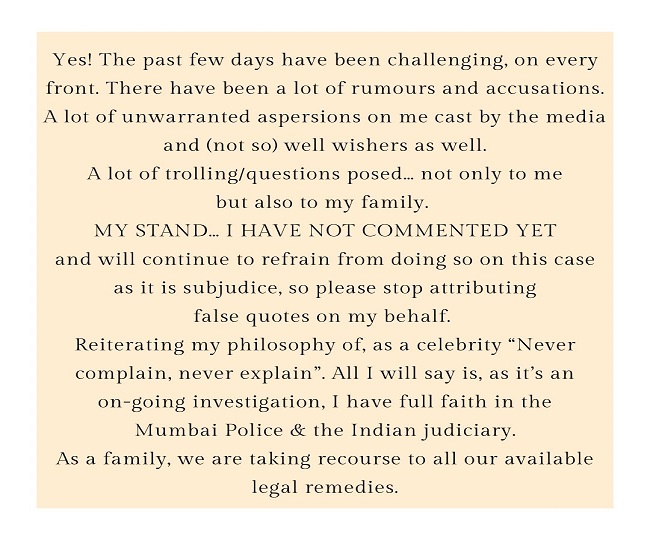 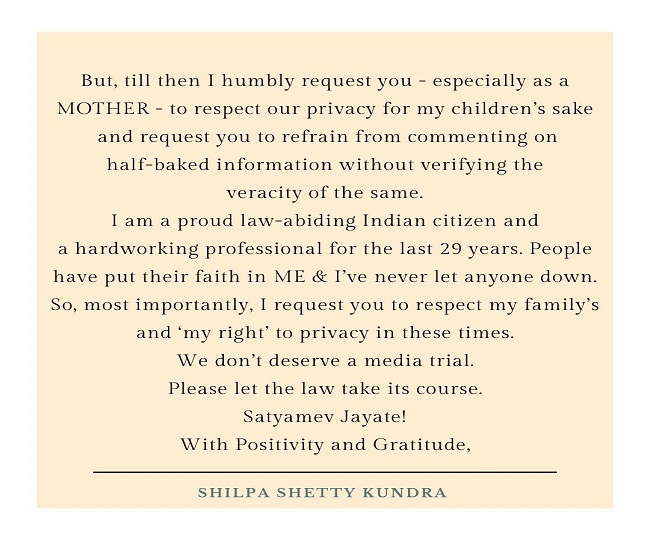 Businessman Raj Kundra was arrested on July 19 by the Mumbai Police for his role in the alleged p**nographic case. The Mumbai Police claimed that Kundra allegedly used to create and publish p**nographic films. The police has also questioned Shilpa, but has not found evidence against her.

Meanwhile, Shilpa has told Mumbai Police that Kundra is innocent and his brother-in-law Pradeep Bakshi was involved in functioning of the HotShots app that was used to distribute p**nographic films.

Also Read
'Occasion to strengthen strategic partnership': PM Modi ahead of his 3-day..

However, the police believe that Kundra was actively involved in the case and was a "key conspirator". The police also want to know whether Shilpa played an active role in the entire p**n racket.