The border between Delhi and Noida was sealed on Tuesday in view of the increasing cases of coronavirus.

New Delhi | Jagran News Desk: Gautam Buddh Nagar administration on Tuesday closed the border between Delhi and Noida in view of the increasing cases of coronavirus. Few exceptions have been allowed by the authorities.

"By the report of the health department of Gautam Budh Nagar, it seems there is a probability of transmission in people who commute between Delhi and Noida," the order by the District Magistrate read.

"Dear residents, As per the medical department advice, in the larger public interest, as a preventive measure to fight Covid 19, we are closing Delhi-GB nagar/Noida border completely, with following specified exceptions. You are kindly requested to cooperate. StayHome StaySafe," tweeted Gautam Buddh Nagar District Magistrate. 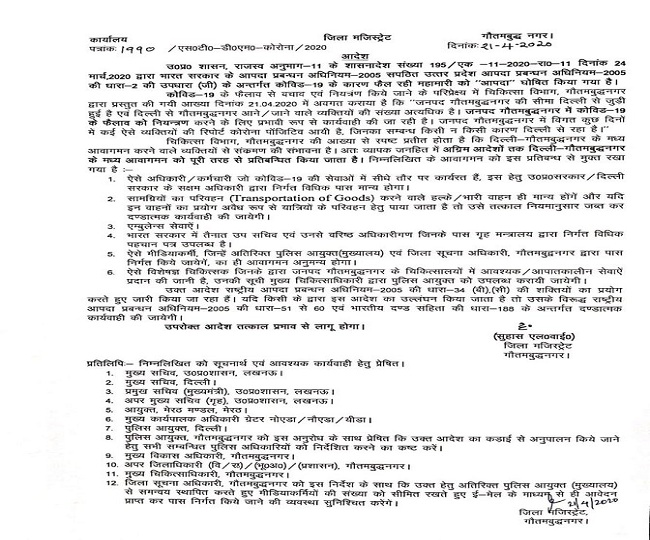 Among those who have been exempt from the ban are:

Two more positive cases of coronavirus were detected in Noida on Tuesday, taking the tally in Gautam Buddh Nagar district in western Uttar Pradesh to 102. One of the new patients is a resident of Sector 8, while the other lives in Sector 19 of the city.

The Gautam Buddh Nagar police has already extended the restrictions imposed under CrPC Section 144 till May 3, covering the duration of the country-wide lockdown as announced by the central government.

On Tuesday morning, massive traffic jam was reported across the main highway between Delhi and Ghaziabad in Uttar Pradesh for several hours after the border between the two states was sealed.

Ghaziabad District Magistrate Ajay Shankar Pandey had ordered sealing of Ghaziabad-Delhi border on Monday after six people who had come from Delhi tested positive for coronavirus.

The decisions of sealing borders come at a time when Delhi continues to witness sharp spikes in confirmed COVID-19 cases which have crossed 2,000-mark with 47 deaths.

Several relaxations from the lockdown restrictions came into effect from Monday at select places across Uttar Pradesh, Rajasthan, Madhya Pradesh, Kerala and Goa among other states, even as several states reported a rising number of cases to take the nationwide tally neared 19,000-mark.

However, some states preferred to maintain strict restrictions for fear of losing control, with Tamil Nadu and Karnataka joining Delhi in deciding against any relaxation till May 3. Telangana went a step further by extending the lockdown till May 7.