Delhi-NCR Pollution: A change in wind direction to easterly is likely to cause another spike in the coming days.

New Delhi | Jagran News Desk: A visible later of haze lingered over the national capital on Tuesday morning with Delhi's air quality index touching this season's high at 332 in "very poor" category. The AQI deteriorated from Monday's 261 which falls in the "poor" category.

According to the Indian Meteorological Department, wind speeds on Monday remained below 5 km/hr and the low wind speeds led to trapping of pollutants locally. A change in wind direction to easterly is likely to cause another spike in the coming days.

According to System of Air Quality and Weather Forecasting and Reseach (SAFAR), stubble burning has contributed to Delhi's PM2.5 readings by around 3 per cent, indicating that majority of pollution source was local. 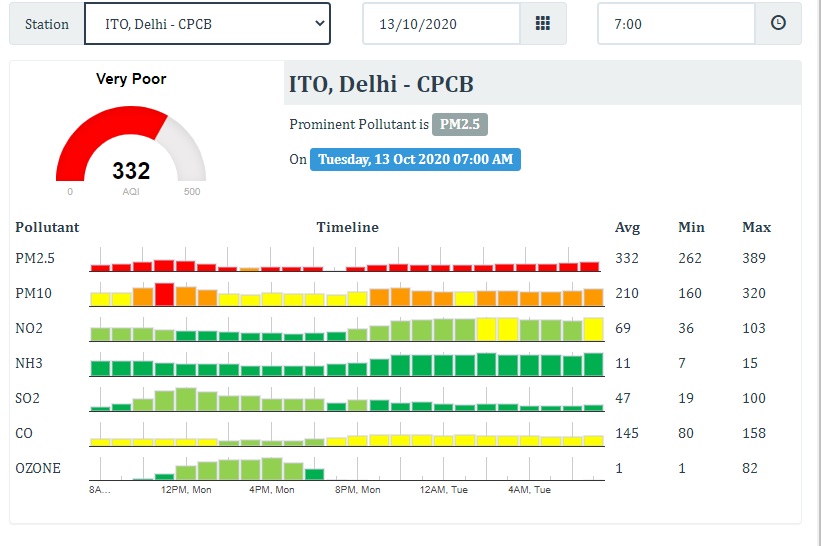 Environment Minister Gopal Rai on Monday asked common people, private and government agencies that have undertaken construction works to take adequate measures to prevent dust pollution, “else strict action will be taken against them”.

The minister also said the government has started “micro monitoring” of all 13 pollution hot spots in the city and will soon deploy environment marshals to check violations of norms.

The government has been taking action against demolition and construction sites larger than 20,000 square metres which have flouted dust control norms despite warnings, he said.

On Sunday, the minister issued directions to impose a fine of Rs 50 lakh on the National Capital Region Transport Corporation (NCRTC) for not taking dust-control measures at a construction site near Vikas Sadan.

On Saturday, the Delhi government imposed a fine of Rs 20 lakh on the Federation of Indian Chambers of Commerce and Industry for dust pollution at a demolition site on Tansen Marg.

It is mandatory to install anti-smog guns at construction and demolition sites larger than 20,000 square metres, according to government guidelines.