Delhi Mundka Fire: Smoke from the fire spread to the entire building and some people jumped off through the windows to save themselves, while some others used ropes to climb down, with police saying a few of them got injured in the process.

New Delhi | Jagran News Desk: In one of the worst fire incidents in the national capital, at least 27 people on Friday lost their lives while 12 got injured in a massive blaze that gutted a 3-storey commercial building in Delhi's Mundka. The building is located near Mundka metro station and housed offices of several firms including CCTV cameras and a router manufacturing company. Over 50 have so far been rescued from the site, Delhi fire department officials said adding that the rescue operations are still underway and will take some time to complete given the vast area of the building.

According to the police, a call about the fire was received at 4.45 pm following which they immediately reached the building location, near metro pillar number 545. The Delhi Fire Service deployed cranes to rescue those trapped in the blaze. However, smoke from the fire spread to the entire building and some people jumped off through the windows to save themselves, while some others used ropes to climb down, with police saying a few of them got injured in the process.

Here are the top developments from the big story:

- We received 27 dead bodies. All severely burnt&charred. Of these, 7 bodies have been identified. Relatives still coming for the identification process. At least 7 other families are looking for their members among the bodies: Dr SK Arora, MS, Sanjay Gandhi Hospital.

- Bodies not being identified or even being identified would be extracted DNA from. One body would be analysed against four relatives. We are waiting for other families to reach here & identify their members: Dr SK Arora, MS, Sanjay Gandhi Hospital

- Survivors narrate the incident: "We were all sitting in a meeting. The power went out suddenly and someone said that a cloud of smoke is rising. There was chaos, windows were broken & people threw ropes at us to get down", Bimla, one of the injured said.

"We were sitting in a meeting, I don't know when did fire break out.There was no way to get out. There was only one exit where the fire had already broken out. We were on the 3ird floor. There were 250-300 people there", another injured woman said.

- Death toll to rise: In the morning we have got some more remains, seems like the bodies of 2-3 people. The death toll might reach 30. The fire increased rapidly due to lots of plastic material in the building, a fire official said. 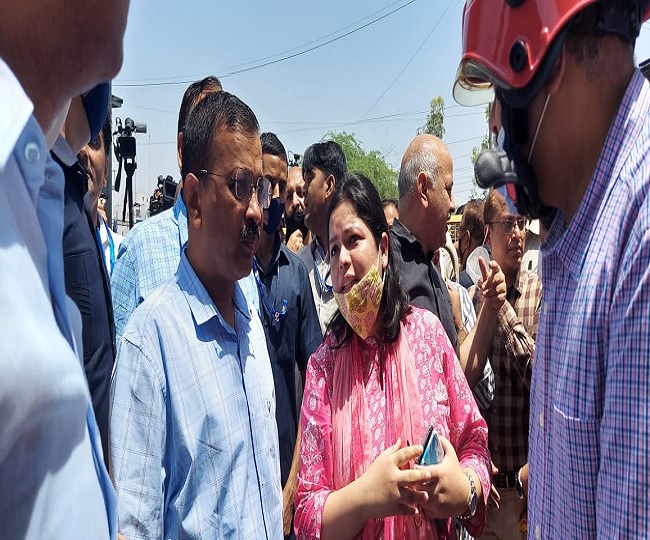 - Charred human remains were found on Saturday on the second floor of the building in outer Delhi's Mundka area where a massive fire broke out a day back, Delhi Fire Service (DFS) officials said. It is suspected that an explosion in an AC may have triggered the fire, DFS Director Atul Garg said.

"Charred human remains were found on the second floor of the building during a search operation by our fire fighters. But we cannot say if it is the remains of one body or several bodies. Though the fire has been doused, the cooling and search operations still continues," Garg said.

- 2 arrested: The Delhi police on Saturday arrested the owners of a CCTV cameras and router manufacturing company that was operating on the 1st floor of the building. The company owners are identified as Harish Goel and Varun Goel and their antecedents are being examined. 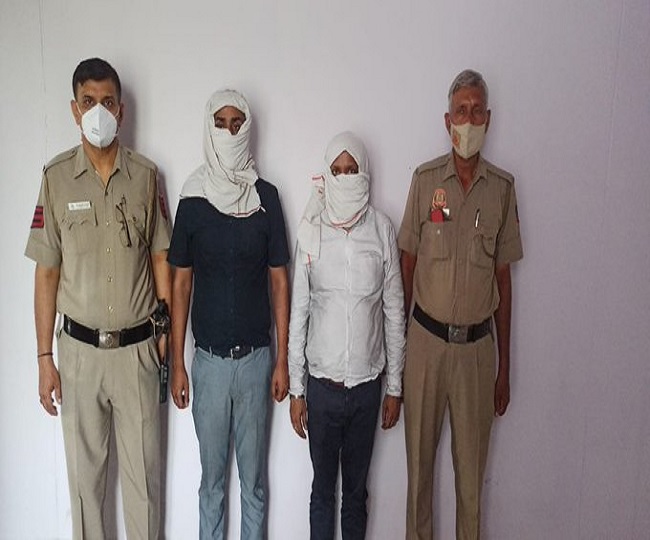 - Delhi Police file FIR: Deputy Commissioner of Police (Outer) Sameer Sharma said that the FIR has been registered under sections 304 (Punishment for culpable homicide not amounting to murder), 308 (Attempt to commit culpable homicide), 120 (Concealing design to commit an offence punishable with imprisonment) and 34 (Acts done by several persons in furtherance of common intention) of the Indian Penal Code. 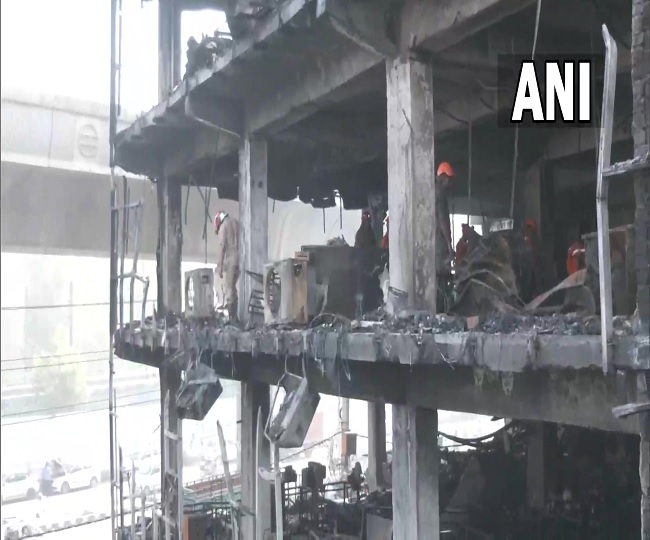 - Death toll likely to rise: The death toll in the Mundka inferno may further increase as search operation teams have found more charred remains from the second floor of the ill-fated four-storey building. Fire department officials also shared a picture of the remains that were found just minutes ago by the NDRF team present at the scene.

- The bodies that were recovered fare yet to be identified and the help of forensic teams will be utilised for the purpose. The reason being most of the bodies were burnt to such an extent that, even it was difficult to establish whether charred remains were of a man or a woman. 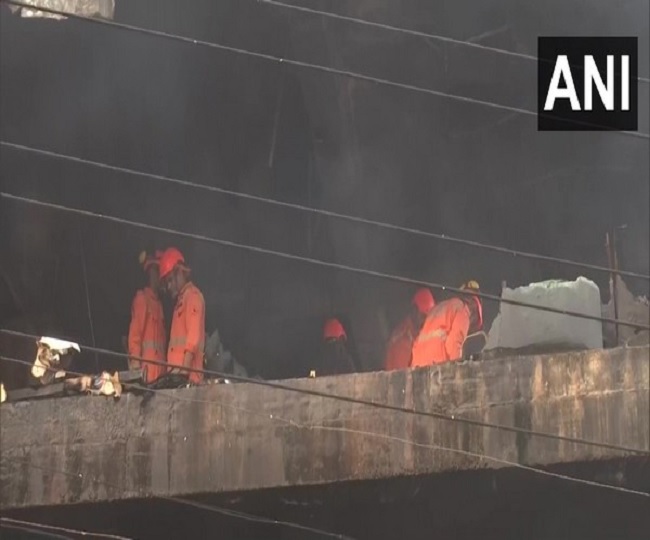 - Helpline started at the hospital: The Sanjay Gandhi Memorial Hospital, where the injured have been admitted, started a help desk through which relatives of the victims in the tragic fire incidents can get to know about their family members. Civil Defence Officer, SP Tomar, as quoted by ANI, said, "This is to help the people whose loved ones are missing or injured, so that they get the correct information."

"We've received 28 missing person complaints. We're collecting complainants' details and their relation with the missing person. We've put up a helpline number from DM West. They'll be informed as soon as we get any information", Sunil Kumar, Civil Defence, at Sanjay Gandhi Memorial Hospital. 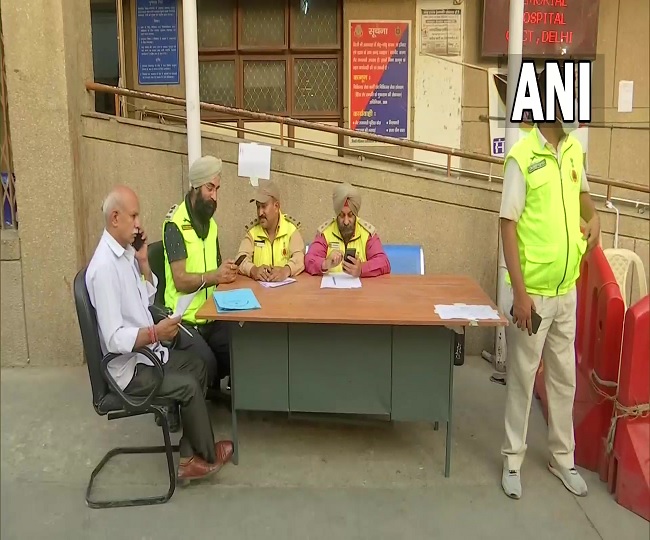 - Building did not have fire NOC: According to the Delhi Police, the commercial building that caught fire yesterday did not have a fire NOC (no objection certificate). The police further said that the owner of the building, identified as Manish Lakra, is absconding and they are trying to track his whereabouts.

"The building did not have a fire NOC. The owner of the building has been identified as Manish Lakra who lived on the top floor. Lakra is currently absconding, teams are on the job and he will be nabbed soon," DCP Sameer Sharma (Outer District) said. 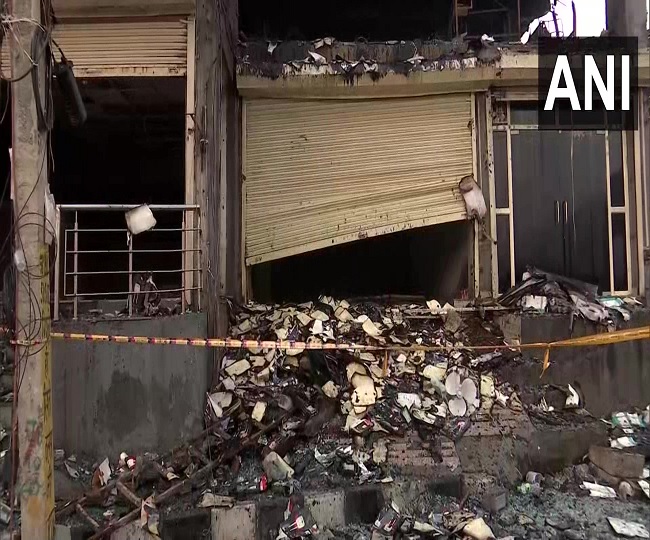 - Many still missing: The distraught relatives of the victims the tragic incident thronged the Sanjay Gandhi Hospital on Friday night looking for their family members. One of them, Ajit Tiwari, said his sister Monika (21) is missing since the incident.

"She started working at a CCTV camera packaging unit last month and received her first salary on Thursday. We got to know about the fire at 5 pm, but had no idea that the blaze occurred at her office building. When she did not return home by 7 pm, we started looking for her," Tiwari said.

Another woman was frantically looking for her elder daughter who also works at the CCTV camera packaging unit. "My daughter Pooja has been working at the CCTV camera packaging unit for the last three months. We live in Mubarakpur and got to know about the incident at 9 pm. She has a cut mark below her left eye. We are looking for her at various hospitals. She is the sole breadwinner of our family of four. Her two younger sisters study in a school," the woman said.

- People jumped from the building to save their lives: The massive fire forced many to jump off the windows or slide down to safety. In videos that emerged on the social media, people could be heard crying for help while others were seen jumping from the building in a desperate attempt to escape the flames.

I happened to pass by the fire that took place near Mundka metro station, Delhi. Was heartbroken to see this. Can only imagine the people who suffered because of it. Sending prayers 🙏 #delhifire #Mundka pic.twitter.com/8O8apeHKOy

- There were videos where people could be seen using ropes to escape the building from where thick black smoke was coming out. Some survivors also used a narrow space in the building to climb down. The police said some people were injured while trying to escape and were shifted to the hospital.

people were jumping from the building to save their lives, while some were jump through rope, help of crain also being taken. 40+ confirmed deaths so far... prayers with them💔🙏🏻 #DelhiFire #mundka #MundkaFire #prayers pic.twitter.com/FM0tT8Gnwd

- This is not the first time that Delhi has witnessed such a massive fire incident. In December 2019, a blaze at an anaj mandi had claimed at least 44 lives, making it the most deadly fire incident in the national capital after the 1997 Uphaar Cinema tragedy that had killed 59 and left over 100 injured.