'Delhi Chalo' March LIVE: The security along the borders of the national capital has been beefed up amid farmers' protest against the contentious farm acts.

New Delhi | Jagran News Desk: In a big development, the Delhi Police on Friday allowed the farmers, who are protesting against the Centre's farm acts, to enter the national capital. This comes hours after the Aam Aadmi Party (AAP) government in the city-state decline the police's request to use the city's nine stadiums as temporary jails.

The farmers have demanded that the government should listen to their grievances against the farm acts, which they claim, will disrupt their timely payments. The Centre, however, believes that the farm acts will do away with middlemen, enabling farmers to sell their produce in the commercial markets.

6:35 pm: The government has always been ready to discuss issues with farmers. We have invited farmers' organizations for another round of talks on 3rd December. I appeal to them to leave agitation in view of COVID-19 and winter: Union Agriculture Minister Narendra Singh Tomar

6:15 pm: Nearly 25,000 farmers had sent a proposal to PM. The laws have been made for traders saying they'll eventually benefit farmers. If govt has brought laws to support farmers, we welcome it. However, there are drawbacks: Mohini Mohan Mishra, All India Secretary, Bharatiya Kisan Sangh

6:00 pm: Farmers shouldn't have been treated so roughly. Using tear gas on farmers who already had tears in their eyes. Farmers' demands are right, govt should heed to them & resolve issues instantly. I ask people of Haryana to treat farmers with care: Bhupinder S Hooda, Former CM Haryana

5:40 pm: Train services normal at all corridors from 5:35 pm onwards. Tomorrow regular services on all Lines as of now: Delhi Metro

5:20 pm: Haryana: Police remove barricades at Shambhu border between Haryana and Punjab, near Ambala as farmers have been allowed to enter Delhi. "Nobody will be stopped, commuters can travel with ease," says Rajesh Kalia, Ambala SP 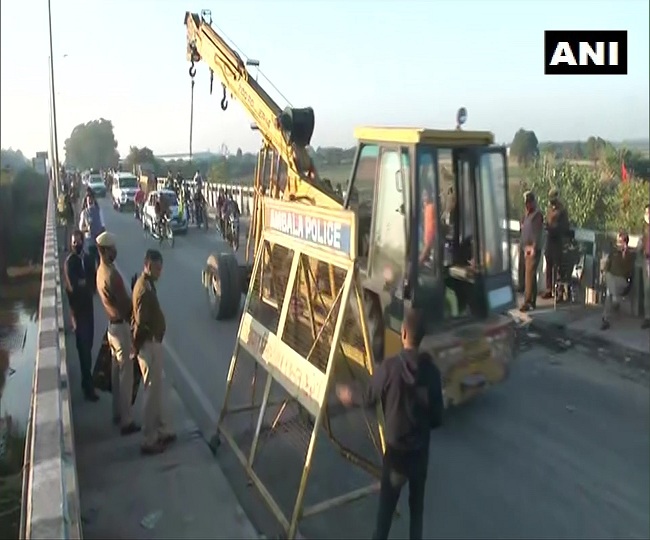 16:32 pm: The central government is always ready for talks. I appeal to all farmers to directly talk to the Centre for all their legitimate issues, says Haryana Chief Minister Manohar Lal Khattar

"We're coming down from Rohtak. Our exams were canceled. There are many students who travel to their colleges. It's causing a lot of problems for us," says a student pic.twitter.com/X1rMaupG3J

Delhi: Farmers enter the national capital through the Tikri border after being given permission to hold their demonstrations at the Nirankari Samagam Ground in the Burari area#DelhiChalo pic.twitter.com/Oy4JcVj6lV

15:09 pm: Haryana Police has registered a case against a truck driver who hit a tractor-trolley from behind in Mundhal, Bhiwani leading to the death of a protesting farmer going to Delhi. Two others were also injured in the incident: Police

15:08 pm: "We've crossed about 10 barriers on our way. We're thankful to the administration for giving us permission to protest. We're happy and only want a peaceful resolution to the issue," says a farmer at Tikri border area

15:08 pm: I welcome Centre’s decision to allow farmers to enter Delhi to exercise their democratic right to protest. They should also now initiate immediate talks to address farmers' concerns on the farm laws and resolve the simmering issue: Punjab Chief Minister Amarinder Singh

14:35 pm: Protesting farmers will be allowed to enter the national capital. They will have the permission to protest at the Nirankari Samagam Ground in the Burari area: Delhi Police Commissioner

13:59 pm: According to a Dainik Jagran report, the farmers have been allowed to cross the border at the Singhu border. The police will likely accompany the protesters.

13:38 pm: Just In: The All India Kisan Sangharsh Coordination Committee in its Twitter has said that a farmer from Mansa has passed away in an accident in Haryana.

"Breaking: AIKSCC is extremely sad to announce that Dhana Singh, farmer of Mansa District, who was coming to Delhi as part of the Dilli Chalo call, passed away in an accident at Bhiwani, Haryana. We pay homage & express our deepest condolences. His sacrifice will not go in vain," it tweeted.

13:10 pm: The Delhi government, meanwhile, has denied the permission to convert stadiums as 'temporary jails'. 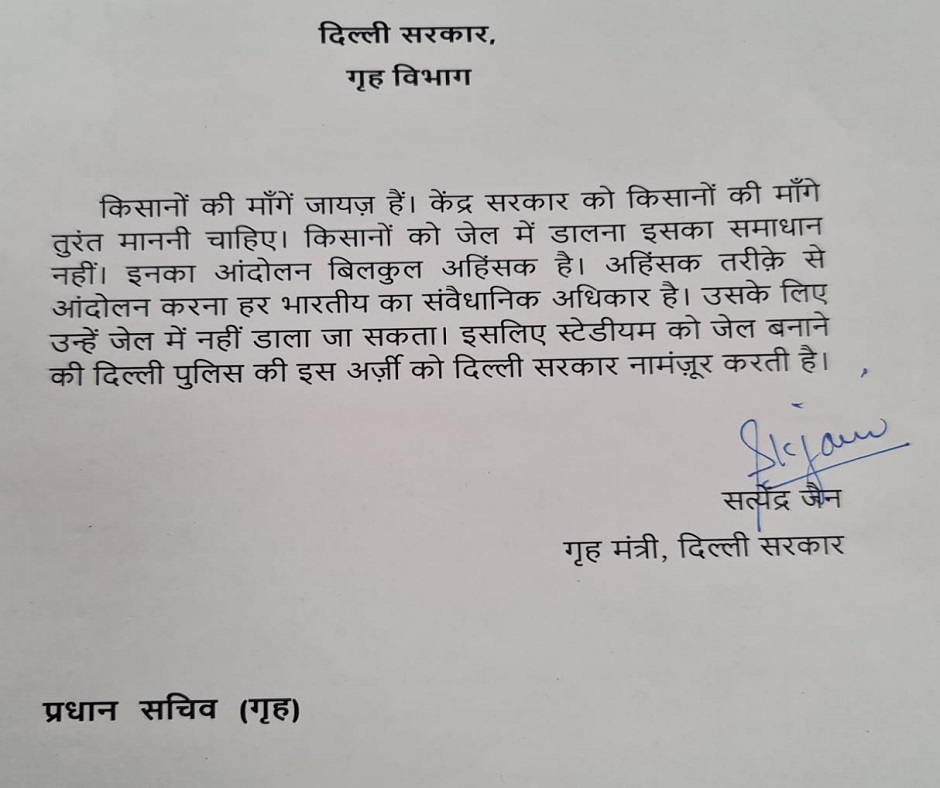 12:40 pm: According to a Hindustan Times report, the farmers' union have written a letter to PM Modi, urging him to let farmers enter Delhi and gather at Ramlila Maidan to hold talks with central government.

Meerut: A groom, along with his wedding party, seen walking on road due to road blockade amidst ongoing farmers' protest .

Police have placed barricades on roads to stop the farmers heading towards Delhi, as part of their protest march against Centre's Farm Laws. pic.twitter.com/nMr1FKg0cf

11:56 am: Farmers from Punjab wait at the Shambhu border between Haryana and Punjab, near Ambala, to cross into Haryana to proceed to Delhi to protest against farm laws. 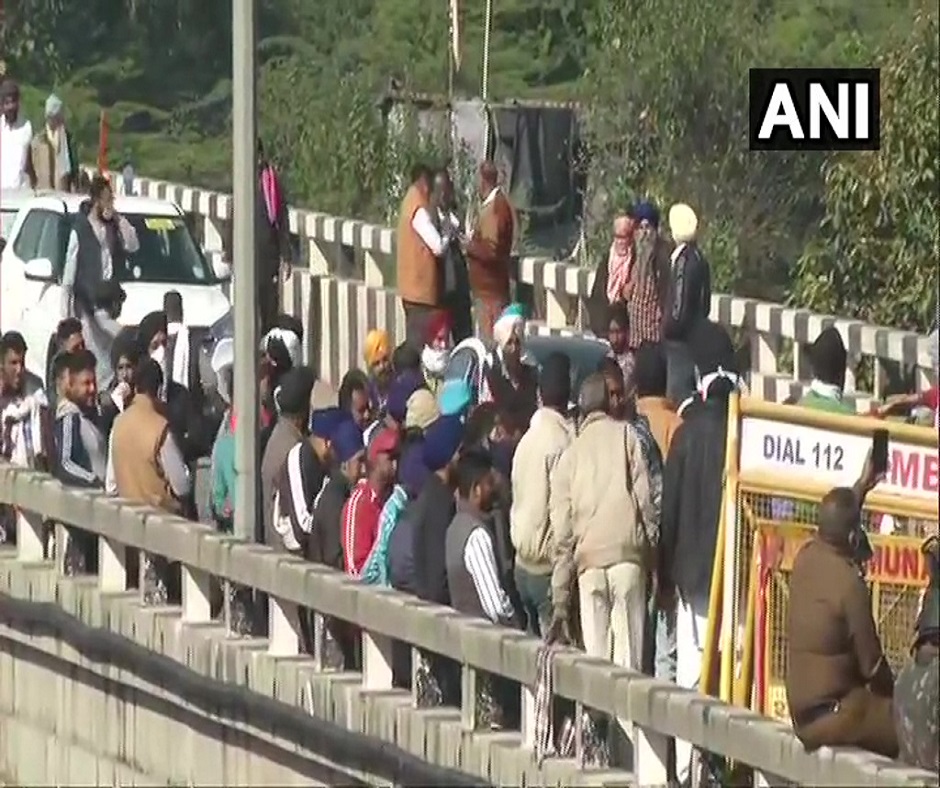 11:55 am: "Whatever we do will be peaceful. We won't harm any person or property. Even if we have to stay for a month, we will. Even if we have attain martyrdom, we will," says a farmer at Delhi border.

11:19 am: According to media reports, clashes are being reported along the borders of Delhi at several places. The farmers are reportedly using stones and sticks to cross the border.

"We are using tear gas to disperse protesting farmers. We are also informing them that in view of the COVID-19 pandemic, any kind of rally and dharna is not allowed," said a police official.

11:18 am: "I urge the Delhi Govt to deny permission for setting up temporary prisons. The farmer of our country is neither a criminal nor a terrorist. Right to protest peacefully is enshrined in Indian Constitution - Article 19(1) and protests are the hallmark of a free, democratic society," tweets AAP MLA Raghav Chadha.

10:51 am: The farmers are facing water cannons and tear gas at the Tikri border.

Farmers are seen clashing with security forces, as they tried to head towards Delhi as part of their protest march against Centre's Farm laws. pic.twitter.com/L67PN4xYKy

10:26 am: According to ANI, Delhi Police have sought permission from the AAP government to convert nine stadiums into temporary prisons due to the farmers' protest.

10:08 am: "We have been doing a peaceful protest and we will continue it. We will enter Delhi protesting peacefully. In a democracy, one should be allowed to protest," says a farmer as cops stop them from entering Delhi at Singhu border. 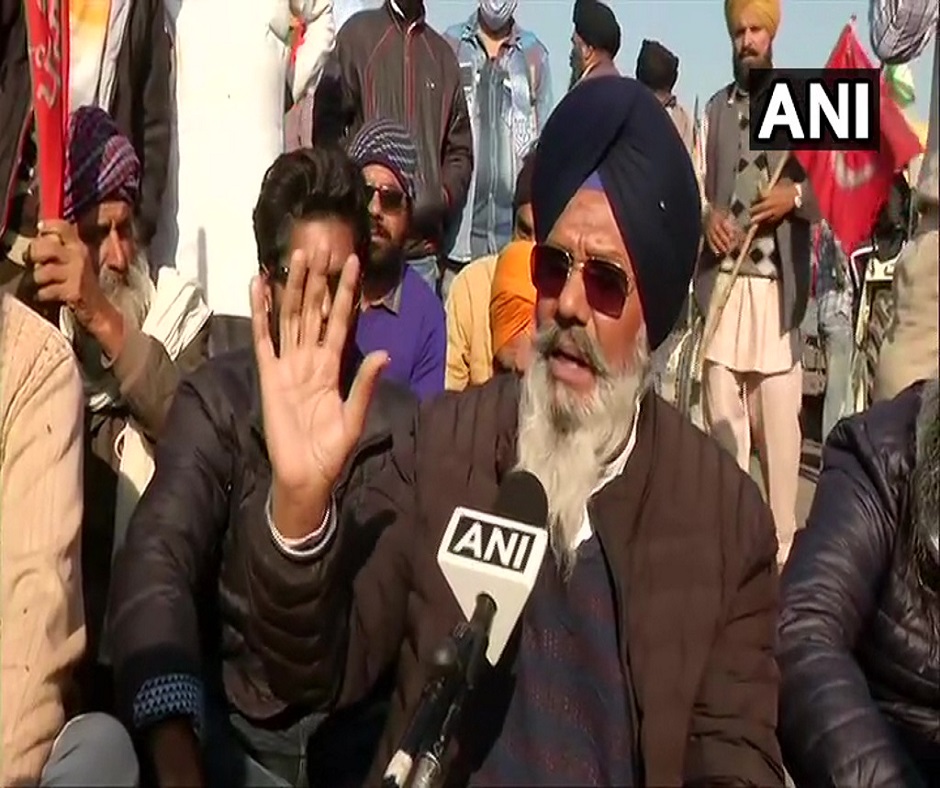 9:48 am: Traffic jam at Delhi-Gurugram border, due to checking of vehicles by police, in view of farmers' protest march. 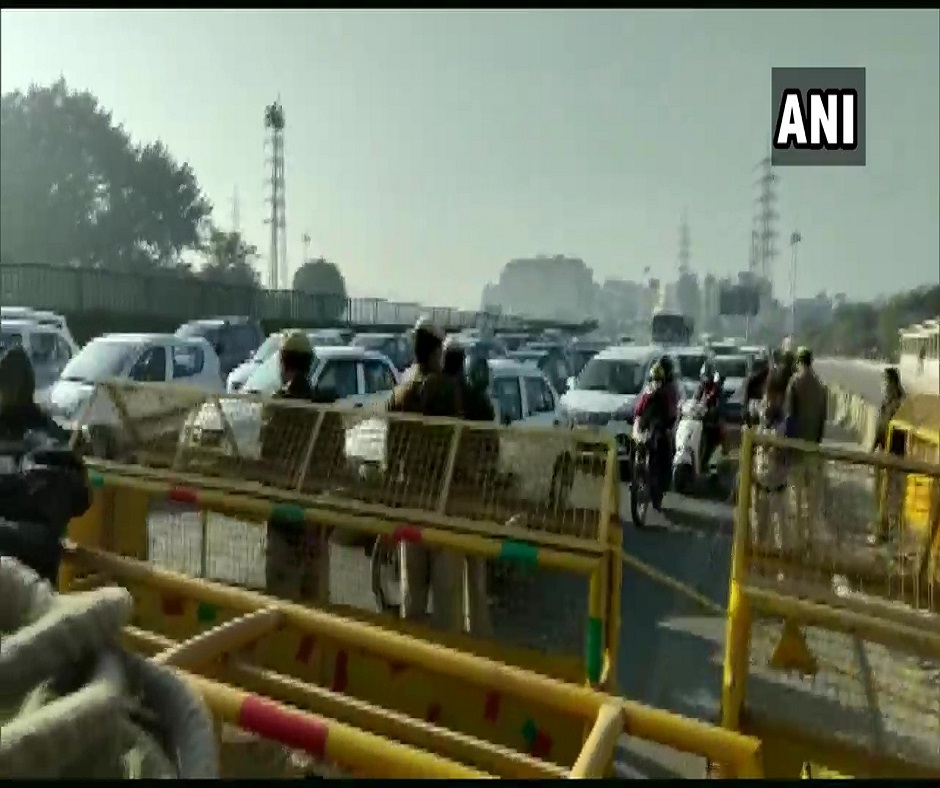 9:47 am: Haryana: A group of protesting farmers from Punjab reach Bahadurgarh. 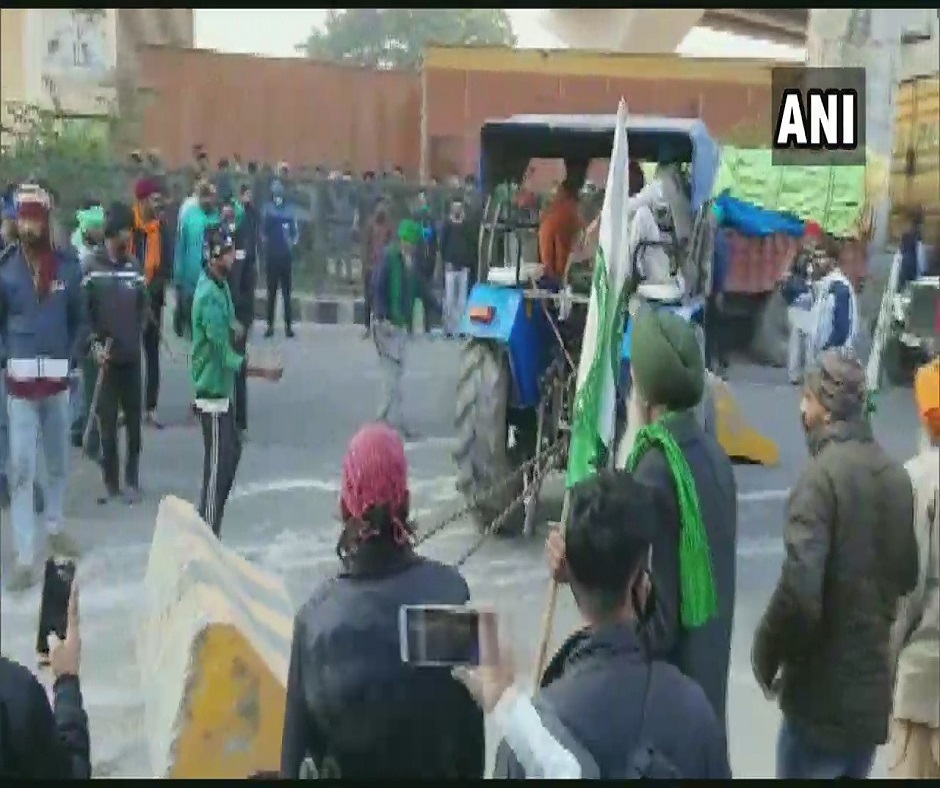 9:46 am: Meanwhile, commuters heading towards Delhi from other states are facing issues because of the protests. "I'm coming from Jammu and was suppose to reach Delhi yesterday evening. We have no updates so far," says Shivangi, a commuter.

9:45 am: No matter what, we will proceed to Delhi. We are travelling with our families carrying ration for six-months, says a protesting farmer at the Delhi-Panipat border.

9:19 am: Meanwhile, the Delhi Traffic Police has informed that vehicles are not allowed towards Singhu Border and commuters can take Western/Eastern peripheral expressway.

Farmers are headed to Delhi as part of their protest march against Centre's Farm laws. pic.twitter.com/Z0yzjX85J5

8:41 am: Amid this, the security along the borders of the national capital has been beefed up with police personnel barricading the borders.

8:40 am: Thousands of farmers are expected to continue their march to the national capital today as a part of their 'Delhi Chalo' protest against farm acts.